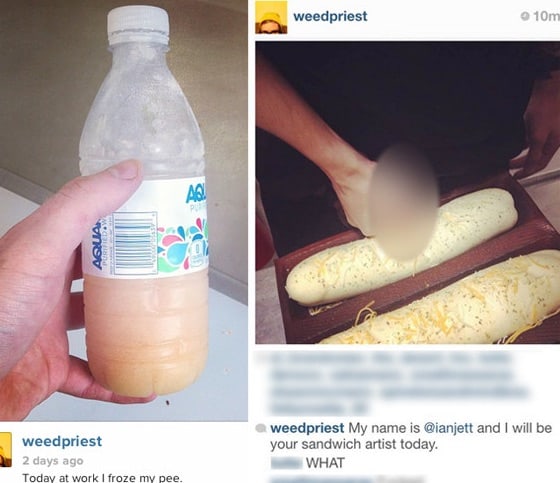 A Subway “sandwich artist” admitted today to putting his penis on the store’s sandwich bread and posting the photo on Instagram.

The bombshell comes after HuffPost Weird News received several photos posted by two men in Columbus, Ohio, who work for the restaurant chain. Their Twitter and Instagram pages are festooned with photos of their exploits (see below). In several photos, Subway’s signature bread is shaped into penises.

One of the men, Cameron Boggs, admitted on Instagram that “today at work I froze my pee” in a water bottle.

Boggs posted — and later deleted — the most incriminating photo, which depicts a man rubbing his genitalia on foot-long bread. It was posted on Instagram by username “weedpriest” with a caption that reads, “My name is @ianjett and I will be your sandwich artist today.”

In an exclusive interview with HuffPost Weird News, Ian Jett copped to defiling the footlong, but denied doing the dirty deed at work.

“I would never do that at work — it was at home,” he said. “This isn’t something I’d ever do at Subway. It was totally a joke.”

Boggs’ other photo shows a water bottle full of a yellow substance that he describes as urine. Though you can’t tell from the photo whether the frozen urine is inside a Subway restaurant, Boggs says it was.

The anonymous tipster who sent in the photos was horrified by the pair’s handiwork.

“I saw the frozen piss picture and thought, ‘What is this guy doing?'” the tipster said. “Then came the penis picture. They’re stupid enough for doing this in the first place, but then to post it to the world? It was a dumb move.

“I didn’t send these to be vindictive,” he added, “But something needs to be done. It’s disgusting.” [source]

Aye. Aside from the fact that the average loaf of Subway bread has approximately 55 more ingredients than the standard “flour, water, yeast, salt, sugar” necessary… I’m gonna say that this is as good a reason as any to make your own damn sandwiches. Start with this one. I hear it’s pretty tasty.

Q&A Wednesday: Why Can’t I Just Do Cardio?

5 Things to Learn From the Doctor Who...

“Make your own damn sandwiches”

Indeed! I try them with bread, with wraps, with lettuce, with cucumber slices, made by me!

I really don’t know what to say right now. I’m just… wow. Wow. This is making me question my love of Chipotle.

Ole nasty selves. SMH. Oh and I totally didn’t know about all the extra ingredients in their bread.

Everytime I read this blog I get another reason to make my own food. Ugh.

…and to think I was considering a Subway sandwich the other day since it’d been a while since I had one. NOOOOOOPE.

Its makes me more than concerned when I go out to eat, what someone will do to my food. I rather make my own sandwich, I know what I am using when it was purchased, and know my hands and utensils are cleaned properly.

SMH…..like dude you were totally at work….I’ve seen those little brown bread things at Subway myself. And he had on his uniform too! LIAR. Guess my once a month Subway trip has to be cancelled……for a lifetime. Just gross and immature.

I worked at Subway before and those are definitely their brown rubber bread pans. Im sure no one takes them home to bake bread. Disgusting! Subway was my only “eat out” restaurant. Ugh. Not anymore!!!