The Empty Calories Of Alcohol 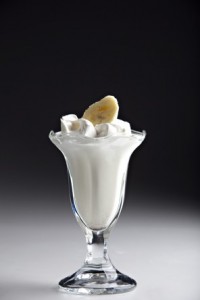 The bartender at the Cheesecake Factory inside White Flint Mall knows exactly where to draw the line between being customer-friendly and betraying her employer. She chokes off the information stream as soon as I ask one too many questions about the restaurant’s Flying Gorilla cocktail, this liquid libation described on the menu as a “ ‘Kicked-Up’ Chocolate Banana Milkshake.”

When I first inquire about the Gorilla, she tells me I won’t even taste the small shots of banana liqueur and creme de cacao in the drink. She’s so giddy about the creamy cocktail, she almost makes me excited to be sucking down an alcoholic shake at an Egyptian-theme chain restaurant inside a Rockville mall just steps from a nearly depleted Borders outlet where practically everything’s for sale short of the employees’ personal footwear. I try to mirror the bartender’s enthusiasm and ask about the other ingredients in the Flying Gorilla.

“I’d get fired if I told you that,” she says, impressive in her facility to blow me off with such good humor. A few days later, I called the Cheesecake Factory’s press people, who were equally cheerful as they turned down my request for the recipe.

The information is important for one simple reason: America’s fat.

You’ve heard the statistics by now and, more immediately, have probably felt that extra jiggle around your waistline. The Obama administration has fired off a number of weapons to combat the, ahem, massive problem, from the first lady’s “Let’s Move” campaign to the new veg-friendly Dietary Guidelines for Americans, but its latest offensive push came on April 1, when the U.S. Food and Drug Administration published proposed regulations for nationwide menu labeling. As written, the regulations require all “chain restaurants, retail food establishments, and vending machines with 20 or more locations” to list caloric information on their menus and menu boards. Two categories were conspicuously exempted from the requirement: movie theater chains and alcoholic beverages.

This is where chains such as the Cheesecake Factory, Applebee’s, Chili’s and others come in. They serve alcohol of every stripe. Many have specialty cocktails, too, such as the Flying Gorilla or Applebee’s Mud Slide or the Chili’s line of designer margaritas. None of the chains may ever be required to list the drinks’ caloric information on their menus (except, of course, in those jurisdictions such as New York City where local labeling laws already require such information).

“The problem is that alcohol is a big source of calories in the American diet,” says Margo Wootan, director of nutrition policy for the Center for Science in the Public Interest.

Fortunately, Nestle offers an example in the book: A six-ounce pour of wine with 13.5 percent alcohol by volume, for instance, translates into about 140 calories. Drink two glasses of that wine with dinner, and you’ve added about 280 calories to your meal. Which would almost be considered a diet drink compared to the Flying Gorilla. Based on a modified recipe found online, this “ ‘Kicked-Up’ Chocolate Banana Milkshake” might contain anywhere from 590 to 870 calories per drink, depending on how much ice cream is used.

[…]
Now imagine a menu where the calories are listed for all of the drinks except for beer, wine and spirits. To Wootan’s way of thinking, that’s a setup for overindulging on empty calories and on a potentially organ-damaging substance. The lack of caloric information for alcoholic beverages, she notes, would “mistakenly give the impression that [they] are a better choice.”

Now, I used to work at one of those frilly franchise joints – y’know, the kind that has the knick-knacks and license plates on the walls – and yes, we had to serve those giant ice cream liquored-up drinks. I’m not proud of it, but it paid the bills.

I bring that up to say that looking back now, as I can, and knowing what is in each of those drinks? I can add up the math in my head. I mean, a mudslide? Somewhere between 6-700 calories. A Lobsterita – a former favorite of mine back in college? Somewhere around 800 calories. A lot of these drinks are hard liquor topped with sugar, blended with simple syrup (more sugar), flavored with liqueur (orange, cherry, banana, mint… and more sugar), sprinkled with novelty on top (cookies, cinnamon, salt, more damn sugar) and then served to you with a straw and a shovel… y’know, to get the whole thing in your mouth.

Let me make a few things clear. For starters, if we’re talking about consuming alcohol? We are not talking about clean eating. We simply aren’t. There is no aspect of alcohol, beer or wine that is clean. It’s that simple. Sure, we can talk about “moderate consumption” and “how much can you drink before you obliterate your liver” all you want, but the reality is that in the interest of health, alcohol is a set back. It is not clean.

That being said, is there some kind of “pass” being given to alcoholic beverages for not having their calorie counts posted? I mean, if people are going to partake, shouldn’t they know the details? Shouldn’t the restaurants be equally prepared and willing to offer up that information? I mean, I know from personal experience – no one in the restaurant will know the calorie counts for those drinks even if they were asked… so I’m wondering, here.

I’m wondering what everyone’s thoughts are on what this article proposes. Two more excerpts for ya:

So what was the FDA thinking in not including alcohol in the proposed regulations for menu labeling? The agency apparently does not believe it has jurisdiction over alcohol, citing case law that states that the federal Alcohol and Tobacco Tax and Trade Bureau has authority over most alcohol labeling. According to the Federal Register notice of April 6, it “is not clear that Congress intended for the nutrition information disclosures . . . to apply to alcohol beverages, given that the labels of the majority of alcohol beverages are regulated by TTB.”The FDA’s argument ignores two simple facts, say nutritionists and public health advocates. One: The FDA does have regulatory authority over some alcohol, including wine and hard ciders that contain less than 7 percent alcohol by volume, as well as beers made from grains other than barley and hops. And two: The FDA’s proposed menu labeling regulations include foods, such as red meat and poultry, over which the U.S. Department of Agriculture has regulatory and labeling authority. Why does the FDA feel justified in invading the USDA’s territory but not the TTB’s?

Sound Off: Models Hate Being Called “Plus-Sized”…Do You Hate It, Too?

101 Revolutionary Ways To Be Healthy

Hmmm. I definitely booze it up once a week or so. I stick to a glass of vino or a skinny mojito (no sugar!). But I can’t imagine sucking down ice cream + booze. Seems like a recipe for barfing to me. And oh, yeah…gaining weight. That too.

Culturally, I think the United States (and other “Western” countries) has this affection for alcohol that I’ve never really understood. Obviously, alcohol abuse can be a serious problem, but it’s such an essential part of the social scene for many (most?) people. It’s a bizarre cognitive dissonance that has confused me for years.

In addition, people will nitpick solid food and soft drinks to death (Carbs/saturated fat/red meat/sugar/any cooked food = “bad”). Yet, many of those same people are curiously silent on alcohol consumption. There’s a bit of classism at play as well – drinking alcohol implies a level of sophistication that drinking a soda does not. Doesn’t matter that it’s all sugar.

*Putting on conspiracy theorist cap* After working in Corporate America for several years, I’ve noticed that, among executives and/or power brokers, a fair share of “business” is done in the presence of alcohol. It’s an acceptable indulgence, required even. I think that, regardless of your political views, social drinking is the norm in almost all “power-broker” circles, so it’s not perceived negatively.

The only time alcohol is an issue is when alcoholism is obvious. How much of the activism around health and nutrition ever emphasizes alcohol in meaningful ways? Maybe it’s out there, and I’m missing it.

Throw in Hollywood and its romanticism of drinking, and there’s another slice of the pie. (One of the highest grossing movies of 2009? Wait for it……The Hangover.)

Ultimately, I think it’s a mix of social/cultural acceptance, economic interest, and perhaps overall lack of public understanding of how alcohol affects the body.

I have been training for a 5k and cut out all alcohol. After that time, I had a beer, and I swear it felt like poison in my system. I felt so bloated and yucky, I had like 1/3 of it and couldn’t drink any more.

I saw your post last week and then this article just now. I like to go out and have fancy dranks but I’m about to stop. It’s just not worth it at all.

Companies that sell alcohol make way too much money to make the caloric content of their beverages easy to access. More people are reading labels these days many would not indulge so much if they knew how many calories these alcoholic drinks have in them, especially when added to the calories they’re eating from their meal.

Thanks for this post. Lots of great info here. I just shared this information on my Facebook page. Thanks.

not to mention..alcohol makes your tummy bloated. I see average sized men with these “bellies”..and its all beer and alcohol. i remember a few weeks ago i had a b-day..and had celebratory wine (resling, moscato) at several dinners that weekend\ my waist started to tell on me…one week of water, green teas..reduced sugar, fiber and clean eating help to bring my waist back down to pre-birthday 🙁

I really wish there were calorie counts on everything. Whenever I am in NY..i absolutely changes what I eat. I also order simple drinks that I can guesstimate the calorie count of..and any frozen drink or drink with sour mix is OUT. I think the thinking is.. since, like you said, alcohol aint clean eating at all.. in the least, then you already know your killing your diet when you consume.. Shrug.. I just blame it on corporate greed.