Home Debunking The Myths Why “95% Of Dieters Fail” 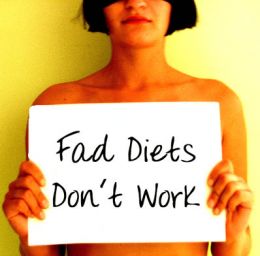 I cannot say this enough. I am not a dieter. I don’t “diet,” I don’t “go on” and “come off” of a diet. I don’t “have cheat days, good days or bad days.” I don’t lock myself into some miserable lifestyle that I can’t enjoy. I don’t do any of that.

However, it still never fails. Whenever someone wants to snark me on my philosophies regarding weight and the body, I am quickly dismissed: “I’m glad that you were one of the successful 5% of people in this country who managed to lose weight and keep it off, but…”

Actually, no, I’m not… because I didn’t lose my weight by dieting, and I for damn sure don’t keep it off that way. I’d sooner be counted among the “95%” who failed.

Don’t get me wrong – like most people, I spent years dieting. I went on liquid diets. I tried “fat burner” pills. I even tried religious fasting, assuming that if the fast would result in successful weight loss, it’d prove to me that there is, in fact, a God. (Kidding… sorta.)

However, through managing and maintaining this blog, I’ve learned the hard way that there are big huge gaping reasons why, as they put it, 95% of all dieting attempts fail.

First, let’s back track to understanding where that percentage came from. From a 1999 article in, my favorite place, the NYTimes:

That statistic has been quoted widely over the last four decades, in Congressional hearings, diet books, research papers and seminars. And it is the reason so many people approach dieting with a sense of hopelessness.

But in fact, obesity researchers say, no one has any idea how many people can lose weight and keep it off. Now, as researchers try to determine how many people have succeeded, they are also studying the success stories for lessons that might inspire others to try.

”That 95 percent figure has become clinical lore,” said Dr. Thomas Wadden, a professor of psychiatry at the University of Pennsylvania. There is no basis for it, he said, ”but it’s part of the mythology of obesity.”

Dr. Kelly D. Brownell, the director of the Yale Center for Eating and Weight Disorders, said the number was first suggested in a 1959 clinical study of only 100 people. The finding was repeated so often that it came to be regarded as fact, he said.

[It was] clear that the 95 percent failure rate was so poorly founded. The figure comes not from any kind of random sampling, but from a study of 100 patients treated for obesity at a nutrition clinic at New York Hospital in the 1950’s. In 1959, its authors, Dr. Albert Stunkard and Mavis McLaren-Hume, published a paper in which they concluded, ”Most obese persons will not stay in treatment, most will not lose weight, and of those who do lose weight, most will regain it.”

That conclusion, Dr. Brownell of Yale said, has since become the most frequently quoted statement in obesity literature.

Dr. Stunkard, who is now a professor of psychiatry at the University of Pennsylvania, said the study was ”perfectly respectable” for that period. ”The paper made a big impact because everybody thought obesity was pretty easy to treat,” he said. ”This showed that, for whatever reason, it wasn’t.”

But the study has little relevance to the current understanding of how to control weight, said Dr. Stunkard, who specializes in the treatment of obesity and eating disorders. The 100 patients in the study were ”just given a diet and sent on their way,” he said.

”That was state of the art in 1959,” he added. ”I’ve been sort of surprised that people keep citing it; I know we do better these days.”

The intervening years have brought significant changes to the treatment of obesity, the most important of which, Dr. Stunkard said, has been the introduction of behavior modification techniques.

Since the 1959 study, though, the statistic has been reinforced by most other clinical studies, which also showed people with discouraging results.

”Unless we can prove they’re typical, the data cannot be generalized,” Dr. Brownell said. ”The people we see in clinics tend to be more overweight and have more psychological problems. They are more likely by a factor of two to have binge-eating problems.”

The true failure rate could be much better, or much worse, he said. ”The fact is that we just don’t know.”

That being said, I’m genuinely surprised that the fail rate wasn’t higher. I wholly expect people to fail on diets. Why? Because it is my personal belief that there is almost always something interfering with a person’s ability to eat the way they should, and it ain’t just “not knowing better.”

There is a monumental difference between changing how you live (and yes, even when you think you cannot, you can) and “dieting.” Dieting doesn’t solve the problem most of us face. While we’re playing, dieting doesn’t even put a band-aid on the problem. Dieting pretends the wound isn’t there by saying “don’t worry about when it burns and oozes goo… just blow on it and it’ll be okay.”

I know that I quoted an article that debunked this foolish 95% figure that keeps being thrown around, but that’s specifically because I feel like it’s original purpose was to debunk the idea of dieting, not the idea of trying to lose weight. Losing weight is the end goal of dieting, but dieting is not the only means of losing weight. It’s merely an [unsuccessful] aspect of it.

So, while I’m pretty certain that there are people who cling to that idea that they can be among the 5% of successful attempts, I’m perfectly comfortable sitting among the ranks of the 95% of dieting failures. Quite frankly, I’m satisfied with the results I got via other healthier, more enjoyable means. Here’s hoping the rest of you ninety-five percenters out there can let go of this dieting thing and say the same.

Being Overweight Increases Risk of STDs and Unplanned Pregnancies?

“If You’re Fat, You Only Have Yourself to Blame”

True or False: All Calories are Equal, No...

I have been a yo-yo dieter for years. Yes, dieter. And for the past year and a half I have been a blogger as well. Blogging, reading others and writing my own, has brought me many epiphanies on my journey. One of those is that same you mention about going off and on a diet. Another is that, for myself, I finally realize that the goal is no longer a number on the scale. After all, I have reached that many times in the past and then regained. My goal now is to change my relationship with food and eating. I realize that there is something much bigger for me than just going on a diet. Yes, it is a lifestyle. But that is even too simple for me. And maybe that is the issue for many. That this is truly more than simply calories in vs. calories out and knowing how to lose.

You are definitely right, Erika. I’m hoping to fail at dieting, as well! Diets are quick fixes and they only work in the short term. Successfully losing weight and maintaining the weight loss requires a permanent change in eating and exercise habits.

@Karen. You make an excellent point. Like you and so many others, I know intellectually what it takes to be healthy, yet I still struggle with making healthy lifestyle choices. I think the missing component is exploring the emotional and psychological aspects of my emotional eating. I’m hoping doing this in addition to exercise and proper eating will help me be successful in the long run.

Oooh is this based off the question I asked?! Either way it’s stuff I needed to hear about. *Thank you.*

Not quite; I’ve got to prepare myself for that topic YOU e-mailed about. ROFL

OMG! Preach it sister!
I am struggling to lose weight BUT I actually study behaviour change, obesity, etc. I know dieting doesn’t work, but you’re right! You need to change your behaviours and the environment you live in (such as a potato chip lovin’ husband!).
We do need to understand that there are forces beyond our control and we certainly do live in an obesogenic environment! Hello, why is gallon of milk 4-times the cost of soda?!!? Seriously!
But fear not you out there, researchers are on your side and working hard to change the environment through evidence and policy – it may take us a while, but until then support each other in your endeavours to be the healthiest you and read this blog!!
MP