Someone selling their “magic elixir” for targeting specific areas for fat loss said the following:

“We alllllll know you can gain weight in certain areas – so when people tell you that you can’t lose that same weight in certain chosen areas, they’re lying! It’s real, and my magic elixir can show you how!Yeah, genetics and bone structure play a role, but if you can gain weight only in your back or only in your hips, you can lose that weight only there, too!”

This is someone mixing facts up with fiction, and – in the process – making my head hurt.

Genetics plays a role in the particular places you will gain weight, as well does the sex you were born at birth, your hormone levels (estrogen and testosterone, as well as a few others), and your diet. Genetics will determine the size of your breasts, the size ratio between your waist and your thighs, and your bone structure…

In female-born persons consistently consuming the standard American diet (lovingly referred to as SAD), weight gain is likely to follow a singular pattern: excessive belly fat, wider hips, very full thighs. Everything else tends to grow proportionately in size beyond that.

That being said, shifting from the SADs to a more plant centered diet with quality sources of protein and healthy fats reverses many of the consequences of a highly processed food diet. This would naturally include the belly and hips, among other things; it does not constitute “spot reduction.”

Spot reduction is the idea that you can seek to solely lose weight in one part of your body – your arms, thighs, or breasts, for example – without the other parts of the body being affected. Lots of people think “Well, if I only do arm curls, I’ll get right of the body fat on my arms,” and this isn’t the case. What you’ll end up with is arms with much more mass on them (provided your nutrition is on top of it all) because all you did was target the muscle in that region to tear and rebuild stronger, not actually burn any body fat. And, while your metabolism might increase thanks to the development of muscle, you wouldn’t experience the major changes that are implied with a term like “spot reduce.”

Lots of people think spot reduction is possible because certain training programs are successful enough to make muscle appear where there is none, and people still believe muscle “turns into” fat, thereby validating people’s beliefs in spot reduction. However, fat burns and is excreted out with bodily fluids (potty time!), and has very little to do with muscle development at all. When it comes to appearances, many times, these aren’t people with lots of body fat but merely people who have very little muscle mass on their frame, so it becomes easier for them to see the striations (also known as “ridges and lines”) in their muscle groups.

Developing muscle in a certain spot is somewhat possible, but losing fat in a certain spot is not. You can build, say, your biceps, but not without using your triceps or the muscles in your forearms. You can build your booty, but not without considerable effort from your thighs (which will also “build” right along with your booty.) You can build muscle that will change the appearance of your figure – it can spread your hips, define your torso better, give you more of an hourglass, build your booty, or define your legs more – but that would literally be the only way you could “spot” alter your body. A magic elixir isn’t going to affect that.

In fact, let’s talk about the idea of a “magic elixir” – if you were given a “magic elixir” and told to consume it in place of a meal chock full of processed food, you would experience benefits, but not from the elixir – from removing and cutting out the processed food. With links to heart disease, diabetes, and – yes – belly and hip fat, processed food plays a major role in where your body builds fat. An elixir would absolutely help cut down on that. It just also happens that your elixir could be a green smoothie instead of a $200 program from a snake oil saleswoman. Your “elixir” could also be a salad with healthy veggies, a quality protein, and some oil and vinegar for dressing. And your leftover $189 could be spent…on a good pair of running shoes.

Having just acknowledged that processed food – and cutting it out – affects the way your body shapes out, it should come as no surprise that this was the next paragraph in the originally quoted page:

“I once had this client, and she only wanted to lose some weight in her tummy and hips…I – not her trainer – was able to get almost 4 inches off her waist, and two inches off her hips without shrinking her boobs just like she wanted!”

Sure you did – she cut out processed food and, quite possibly, finally went “number 2.”

In short, spot reduction is a myth. It isn’t real. But muscle development, combined with fat loss, can absolutely bring about the changes you want to see. That magic elixir, however, cannot. Put that elixir money towards some fruits and veggies, or some training equipment, and leave the “magic” to the Copperfields of the world. I can assure you, there aren’t any in the fitness game and they aren’t working any miracles.

What do you want to see me debunk next? 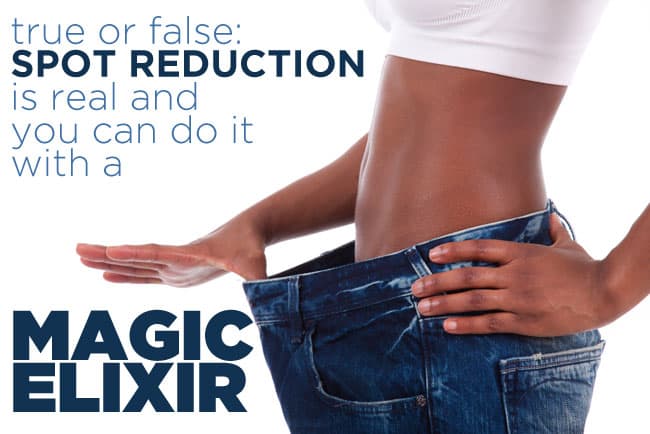 true or false: spot reduction is real and you can do it with a magic elixir

Q&A Wednesday: All About Cravings – Pregnancy, Hormonal, Emotional – and How to Fight Them

True or False: All Calories are Equal, No...