Home My Journey A Weekend With BlogHer 2012: Recaps, Rants, Raves and Relaxation

A Weekend With BlogHer 2012: Recaps, Rants, Raves and Relaxation

It was a stormy night… y’know, the kind where lightening strikes…

I have to admit — attending conferences would’ve never been on my radar had it not been for Eden BodyWorks sponsoring me to attend the Blogging While Brown conference in Philly. I don’t know if I’d simply become anti-social in the blogging world or what, but I’d always been in my little corner, and being in Philly totally reminded me of what I was missing out on.

That being said… ever since Philly, I’ve felt like a non-stop machine. There are a couple of things in the middle, here, that I need to share… but while it’s fresh in my mind, I’ve got to write about BlogHer 2012, which took place this past weekend in NYC.

I actually hadn’t considered attending – it just wasn’t on my radar – until I’d received an e-mail asking me to speak on a panel with Roni, Terry, and Tina, all of whom I was originally familiar with. (More on that later.)

BlogHer was split up into three days, the first day being an extra add-on with the choice of either “PathFinder” and “HealthMinder”-themed days.

Of course, we spoke on HealthMinder day, right? Right. 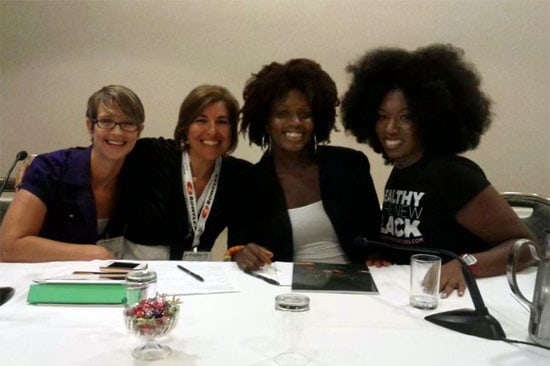 Surely, you can guess which one is me, right? Credit goes to Roni for the awesome photo! Click the picture to read her HealthMinder Day recap!

Our panel was titled “Good Coach, Bad Coach,” and we discussed being considered “role models” on the Internet because of our work/blogs and how we lead our lives, as well as the good and bad that comes with that. I resent the fact that I didn’t have the foresight to record my panel but recorded everyone elses… but luckily there was a live blogger who posted a quasi-transcript of the panel for your reading pleasure.

And yes, if you read the part about yoga, we absolutely did start it out with a mini-yoga session. Trikonasana is pretty much the best way to start your morning, thank you very much. Gets the blood flowing!

The funny thing about being on the panel with Terry was that I didn’t realize who she actually was until well into the second panel of the day. Terry has written a book (well, two, but still) titled Clean Food that made it so easy and simple for the almost-hubby and I to convert to clean eating and locavorism… it didn’t dawn on me until I read her bio and then I completely spazzed out. I think I tweeted her like a madwoman saying “OMG! I can’t believe it’s you! I LOVE your book!” Of course then, after the fact, we had to have an entirely different conversation together. I just had to tell her how dope she is. I think she now knows that I love her.

Later in the day, I also got to meet Stephanie – who I’d been following forever from Noshtopia and Back In Skinny Jeans – and have a brief talk with her about healthy living, blogging it, and where to go next with it. She’s always done amazing things, and I think the world of her. Totally made my day to be able to meet her.

Dr. Pamela Peeke, who I’ve already seen speak in May at the Fitness Magazine event, gave the HealthMinder Day keynote address… and she was beyond dope. I’m still working on transcribing her panel because it was just that good. She spoke on how, even though our genes can determine our susceptibility to harmful behaviors, we can absolutely change those genes and avoid passing that down to our children. Of course that’s important to me – I’m constantly curious about my original bad habits and how those might’ve affected my daughter… and constantly re-evaluating myself to make sure I’m not being paranoid about food around her, because – while I don’t want her to develop the bad habits I had that led me to being unhealthy – I also don’t want her to wind up on the other end of the spectrum, developing disordered habits, either. Peeke’s keynote gave me hope that I was doing enough. (She also shouted both Tina and I out during her speech, which made me smile.) 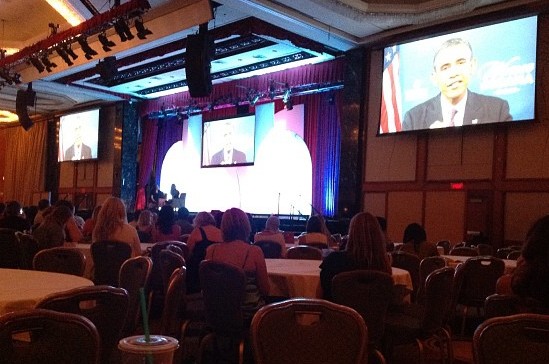 President Obama at BlogHer…before I learned how to actually use my camera.

…that’s right. President Obama gave the opening keynote ceremony speech for BlogHer. Dude. You have no idea how awesome that was. I don’t know – do Presidents do live keynote addresses at women’s blogging conferences often?

After that… all the stuff started happening.

The next morning – and by morning, I mean the sun is still hitting snooze on its alarm – I had a special invitation to… 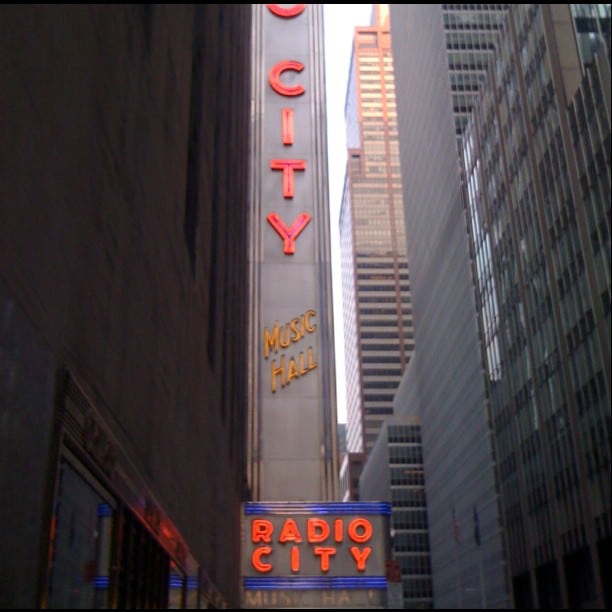 …to workout with the Rockettes! 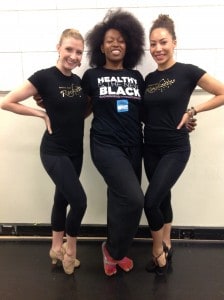 I cannot tell you how much fun we had. We learned a piece of their “Wooden Soldiers” routine, and also learned their tips and tricks for the eye-high kicks they perform. More on that later, though.

I spent the day soaking up knowledge from such awesome and amazing people as Denene from MyBrownBaby, Luvvie from Awesomely Luvvie, Issa Rae of Awkward Black Girl, Franchesca from chescaleigh (also of “Sh-t White Girls Say… to Black Girls” fame), Dr. Goddess (if you’re on twitter, my word you probably have seen the @drgoddess handle around), Stephanie (who I mentioned above), Elaine Wu… just listen. I left Friday feeling inspired and excited, ready to create new plans for the future of this website.

Also, that night, I met up with seven other amazing health and fitness bloggers at Physique 57, an amazing barre studio worthy of its own blog post… because it was quite the experience.

Ashley, Caitlin, Cat, Gina, Meghann, Sabrina, Theodora and I hit up Agave, a Mexican restaurant in the village… and I’m pretty sure we were there for a good four hours just talking, laughing, sharing stories of blogging, getting fit, running, lifting, family life, city living and more. Great group of girls, tons of fun had by all. 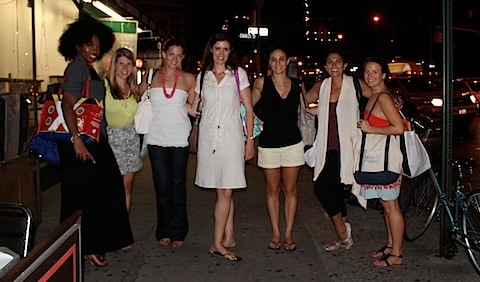 The BlogHer ’12 Crew… bet you can’t guess which one I am! (Swiped from Meghann’s post.. click the photo to read her #blogher12 recap!

Oh, and did I mention Martha Stewart? She’s quite the gangster. All jokes aside. The woman’s business acumen is just… I want to be like her some day. She gave the Friday lunch keynote… and I could hardly eat because I was hanging onto her every word.

Let me stop playing. Y’all know I eventually threw down. 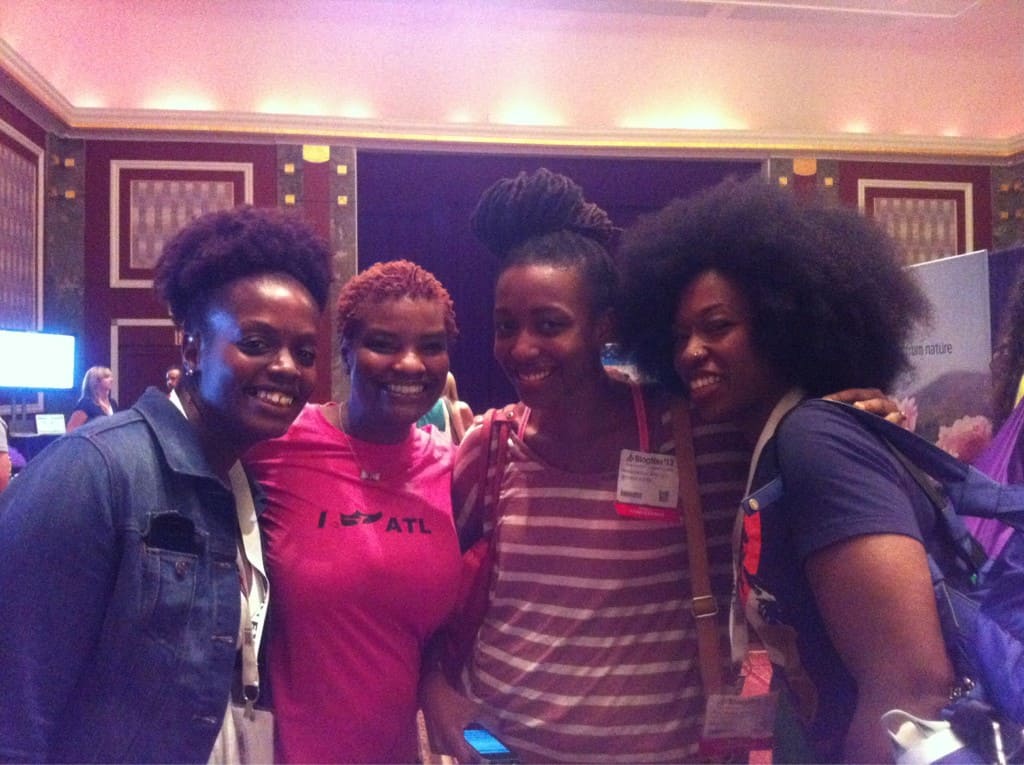 Check us out… looking like the Natural Hair All-Stars up in there. That’s Tina of Beautiful Athlete, Renee of CutieBootyCakes, Fran of All Things Youtube, and me! Fran had to move out of the way of my hair.. she said it felt like cheetos. (shoutout to you if you got that joke.)

The third and final day was just as great, if not better. I had the pleasure of dining with Deesha of Mamalicious Noire, Carolyn, and Lissette, and had a lovely conversation about writing, parenting, family life, Gabby Douglas (yes, y’all. It was like that), men, natural hair, and quite frankly just about everything else under the sun. Getting to meet all kinds of amazing women and hanging out with the coolest kids ever (as pictured above) was almost as important as a special session I attended that day, that has helped me out tremendously with some of the teeny little things I’m hoping to roll out in the coming days. Let’s just say… it’ll be a fun time.

Oh… and I also hailed my first three cabs ever. Three in one day? I felt like a cab-hailing all-star after all that!

Now. I know somebody out there is waiting for the long, deep, philosophical aspect of this recap… and it’s coming. I just had to get all my awe and excitement out, first. Really, I had to get some sleep (and a foam roller – Rockettes workout AND barre workout in the same day? two hours of struggle!) first because I think I was fully incoherent for a good two days post-conference. 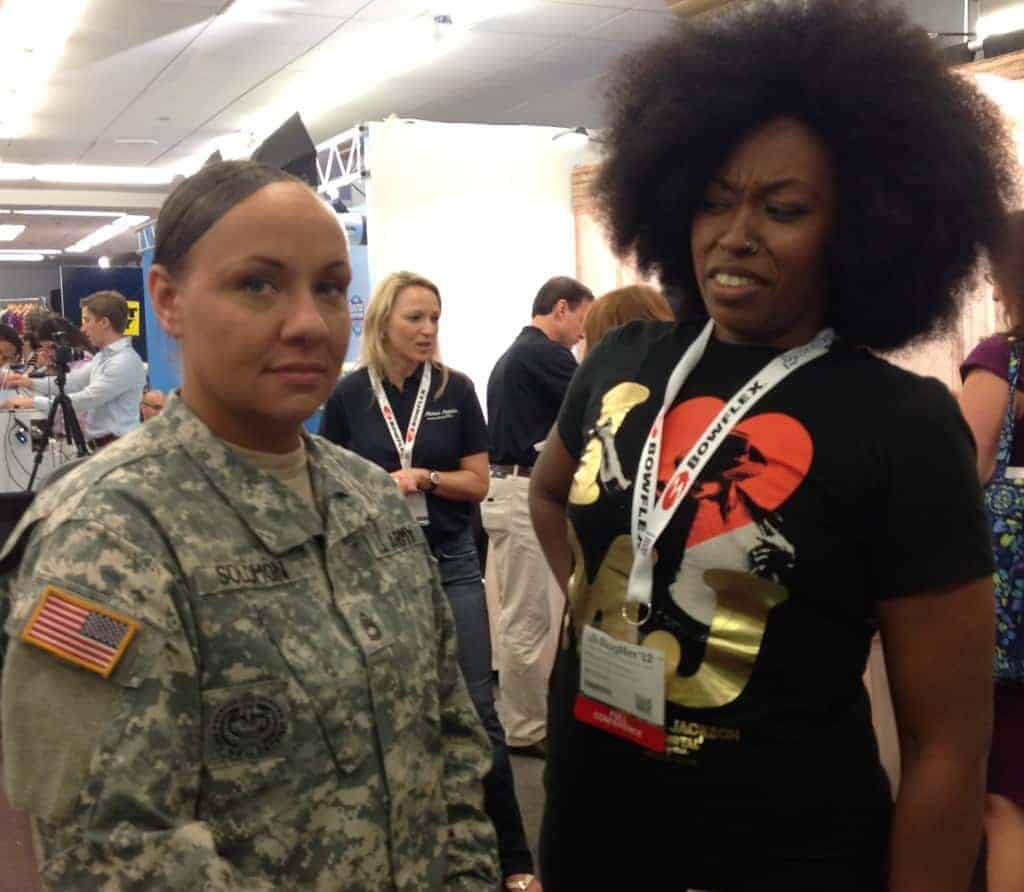 That’d be me… and a drill sergeant. Clearly, a little scared.

…what’s that all about? Well, you’ll have to stick around for that!

PS: What was my one rant? That Trojan ran out of vibrators. I’m crushed… and angry. Know what’d make me feel better?

Girl! Your ‘fro is flyyyyy!! I LOVE your hair! My TWA wants to be that funky fresh when she grows up! =)

It was so great to meet you this weekend! Hope to see you around soon.

I just wanted to say I have and love that MJ shirt and I cried like a baby at the Experience. That’s all.

I found this very interesting! I’m a Blogger from Los Angeles and there’s no support from the Black/Brown Bloggerspere here in LA. I’m a Wigmaker/Beauty Blogger over 50 and I maintain two Blogs, one for Wigmaking and one for Beauty, I also have a YT channel and all the other venues FB/Twitter/Lindkin/etc., but I don’t know how to expand/branch out my Wigmaking Brand called WigWeaves. I was interested in advertising on your Blog but i’m currently unemployed and money is tight. All my wigmaking business comes from YT and it’s a little slow because of summer.

I don’t think that’s entirely fair – LA, much like NYC, is a competitive environment for EVERYONE, not just persons of color, and I can understand that feeling where, as a newbie, you’d expect people to come to you with welcome and open arms.

If it were a city with far less to do and far less in regards of business to tend to, that might be the case.

It’s not always that people are shutting you out, it’s more often than they’re just busy and don’t have the opportunity to come together outside of events like this, otherwise. I met lots of people I might not’ve otherwise seen this past weekend, especially since not only they’ve got plenty to do, but so do I. LOLOL

As far as the advertising goes… hit me up on the side.. we’ll talk. 🙂

Erika, it was so awesome to meet you in person at BlogHer. you rock and keep doing what you’re doing.

Awesome initial recap….looking forward to more. I’m sad that I missed it but am so thankful for all of the live tweets and recaps. Thanks Erika!