Home My Journey A Day At The Pentagon

A Day At The Pentagon

As a part of my ability to work with the US Army, I was granted with the opportunity to visit the Pentagon. And, really, security was so unbelievably tight, that all I am allowed to actually share with you is this: 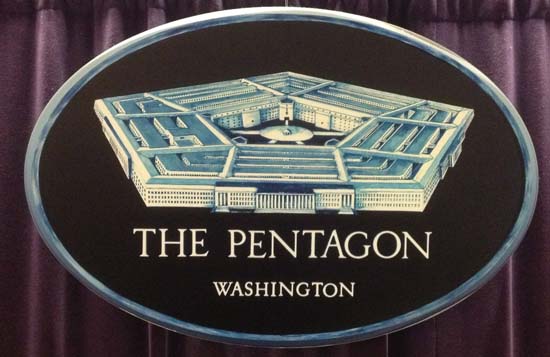 After my press conference… 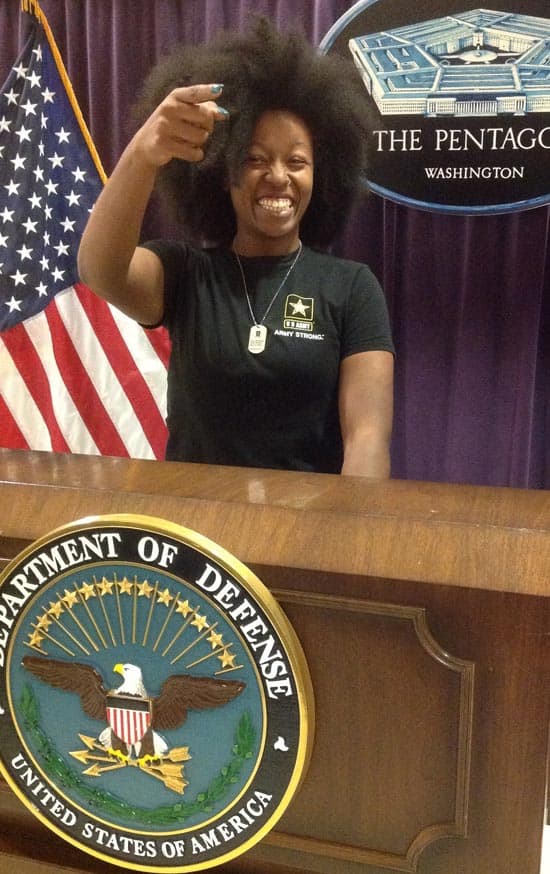 ….just kidding about that, too. They have a nice little space where visitors can come in and take press conference-ish photos. Of course, I had to be a ham.

The day after running the Army Ten Miler, I was given the opportunity to .. uh, I mean tour the Pentagon, learn about the Army’s history in the US, see some pretty amazing artifacts and get a close-up view of the memorial spaces inside and outside of the Pentagon.

Because I’m a nerd, I was actually far-too-interested in the story of the Pentagon’s creation. When someone tells you that a six million square foot building went up in under two years time, you can’t help but be intrigued… and annoyed by the building on your block that took five years to build. It’s also nice to hear that, though the Pentagon was built during the era of Jim Crow and was originally planned to have “separate but equal” bathrooms, President Roosevelt vetoed the idea and demanded that all employees of the same gender would be sharing the same bathrooms, regardless of race.

There is no photography allowed inside the building, but boy do I wish there was. The Pentagon is like it’s own city within itself. Each floor is littered with restaurants, coffee shops, electronics stores, traditional touristy fare. However, it was the spaces with entire walls turned into murals dedicated to the service of our military (and their families) that made me a little misty-eyed. As the daughter of a Vietnam war vet who, by all accounts, came back a “different man,” being this up close and personal with the people who make the decisions affecting our military and knowing that they walk past these murals every day changes your perspective of what informs their decisions. It makes you feel like they’re more connected to the realities of military service than we give them credit for. 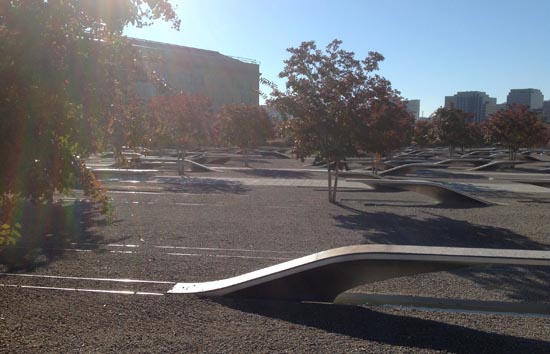 And then, there are the memorials. Spaces and places dedicated specifically to the lives lost in the September, 2001 tragedy along the East Coast are littered throughout the first floor of the Pentagon, full of memorials created by the public. Children’s drawings, quilts – and I mean epic quilts – created in memory, books telling the stories of the lives who were lost, photos, just… a very overwhelming space that reminds you of the least-spoken-about portion of 9/11, and rightfully so. I walk past “The Freedom Towers” in TriBeCa almost every day, and all along the streets are remnants of what happened to NYC that awful day… but I so rarely hear anyone speak of what happened at the Pentagon.

On this day, for me, that was broken.

The outdoor memorial for the September, 2001 tragedy is thoughtful and breathtaking. It is especially engineered to render you silent. Every element of it has meaning. I may not even be able to explain it all, or even make it through this post without tearing up. 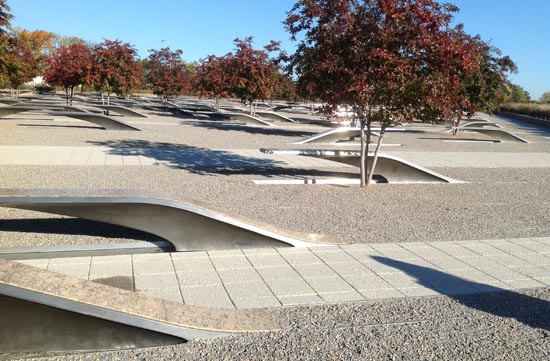 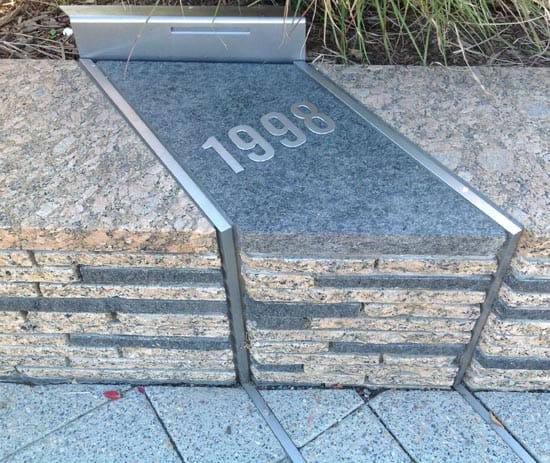 The entire memorial is organized like a giant timeline, with each bench organized by the date of birth of the person involved. The outermost edges of the memorial have a year, like the one above, with two lines where, if you follow them…

…they lead you to the bench that represents the person born that year.

Dana, born in 1998, is the bench closest to the entrance of the memorial. She is the youngest person involved in the tragedy.

In the water underneath her bench, you can see the names of her family members also on the plane. As they each have a bench in the memorial, as well, her name is listed under their benches, too. 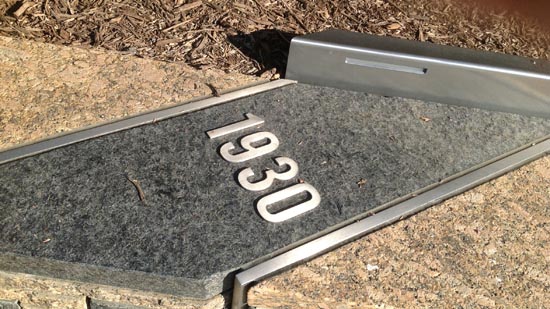 The shot of the bench farthest from the entrance, as the most senior.

The entire trip was overwhelming, but it was an important end to an unforgettable experience. So many of my dreams became real that weekend, with everything from hosting the workout with the US Army as a part of their expo, and running the race, to rounding it out with seeing and meeting many of the people who truly serve and make the greatest sacrifices for our freedom in this country. What on Earth could’ve possibly made it better? 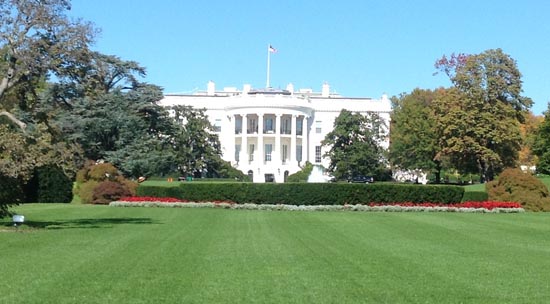 Going to the White House!

Kidding, I swear. Not yet. Maybe some day… especially now that “Let’s Move” will be a platform for four more years… which also means I’ve got four more years to work on my Michelle Obama arms.

No, I’m not kidding about that part.

All in all, #Runtober was a through and through success. Because I got so sidetracked with planning and preparation and a good-for-absolutely-nothing hurricane, though, I have a few more topics to get out of the way before I can draw it to a close. Keep your eyes peeled!

Q&A Wednesday: The “I Can’t Do It! Really! It Hurts!” Workout Pain

Wow. That 9/11 memorial is breathtaking. Thanks for sharing what you could with us 🙂

I love the Pentagon. I’m glad you got to go. As a native Washingtonian, we were fortunate to visit as children. I was able to appreciate it more as an adult though. I hope you get to visit the Capitol as well. There are a lot of interesting secrets about that place. I worked there through 4 presidents and GF if those walks could talk. Haha
Contact your Senator or House rep to try and get into the White House. You can take the public tour of either but the private tour takes you beyond the velvet ropes. Good luck in my city. I miss it.
Side note: If you befriend/ask one of the Capitol Hill policemen or women they might volunteer to take you on the non public tour. It’s awesome.

That’s what I got!!! I was trying not to brag, buuut… it was pretty epic. Very humbling.

Thank You Erika for sharing your experience with us. What a thought provoking and incredible memorial.

Thanks for taking the time to share your life on this blog. This is the first one I have ever joined or read consistently, at least, and I am loving your thoughts, and everyone else’s! Very inspiring and moving.

Hello! I’ve been following your blog for a while now and finally got the bravery to go
ahead and give you a shout out from Humble Tx! Just wanted to mention keep up the fantastic job!