Home What Are You Eating? Supermarket Swindle: What’s In Your Greek Yogurt?

Now… everyone knows, I love my Greek yogurt.

I do everything from eating it with cranberries, cashews and almonds to mixing it with curry and peanut sauce (pronounced “SAWSE”) and slathering it on a Thai burger like mayo.

So…needless to say, a scowl formed on my face when I saw the following: 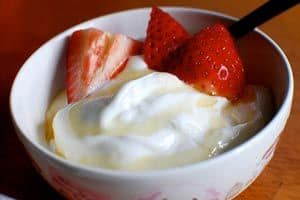 Other companies have watched Greek yogurt take over nearly a quarter of the total yogurt market in just the past five years. They wanted to get into this profitable market segment, too, but they didn’t have those machines.

So they called in food scientists like Erhan Yildiz, who is head of research on dairy products at a company called Ingredion. He knows yogurt — he’s Turkish, too. Yildiz and his colleagues set about finding a way to make it without those expensive straining machines.

They measured the firmness and thickness of those Greek yogurts, and also some attributes that you may not have heard of — “residual mouth coating,” “meltaway” and “jiggle.”

“This is almost like fingerprinting a product. That combination of key attributes really identifies what that product is all about,” he says.

To duplicate the Greek yogurt, they started with regular yogurt, then added different versions of starch, obtained from corn or tapioca. As they tweaked the quality and quantity of added starch, they kept measuring those key attributes. “If you can measure something, you can manipulate it,” says Yildiz.

They arrived at a solution, a “formulated” Greek yogurt that Yildiz says comes pretty close to the original strained version. It’s on store shelves now, although Yildiz isn’t allowed to say exactly which yogurt manufacturers use his new ingredient.

Yildiz sees nothing wrong with this. Authentic Greek yogurt, he says, is what you make of it.

But Chobani’s Ulukaya calls such products cheap imitations. “That ruins the expectation in the consumer’s mind of how pure and simple this product is.”

In the traditional sense, Greek yogurt is little more than yogurt culture and milk protein. A brief glance at the ingredients label for either of the more popular Greek yogurt brands will tell you that. But how’s it made?

Ohio State University nutritionist Julie Kennel Shertzer explained to me that both Greek- and American-style yogurt are made by fermenting milk with live bacteria cultures—the only difference is that Greek yogurt is strained to remove the liquid whey, hence its thicker consistency. (The Greek yogurt company Fage has a good explanation of the process here.) Both are nutritional superstars: They’re excellent sources of calcium and good sources of protein, their bacteria cultures aid digestion, and the unsweetened low- and nonfat varieties are low in calories. But according to Shertzer, Greek yogurt does have a few nutritional advantages over regular yogurt: “Since it’s a more concentrated product, it packs a few more grams of protein per serving,” she says. It’s also a bit lower in sugar and carbohydrates, since lactose, a form of sugar present in all dairy products, is removed with the whey. [source]

What makes Greek yogurt so great is that it is a concentrated source of protein that isn’t as heavy on the system as milk or cheese, and isn’t as cumbersome – or pricey – as sustainable animal meat can be. High protein, low carbs, low (in some cases, no) fat, easily manipulated source of creamy texture? Extremely clean, by our standards? Come on… don’t mess with my heart like this.

What can we do about avoiding “milk protein concentrate” in your Greek yogurt? Check your labels. If it says anything other than milk and, maybe, [insert list of cultures]? Proceed with caution.

(You can also make your own Greek yogurt, but even still… considering how you have to start with some of the cultures from another yogurt, I think you’d still need to be careful with which one you start off with.)

Marriages More Satisfying When Wife Is Thinner Than Hubby?

Oh wow…no words. Watched Food Inc. last night and I knew it was bad but I didn’t know it was worse.

Great post. I remember the first time I bought greek gods yogurt. I was POed the texture was awful. It tasted funny. Then I read the ingredients. It had pectin or something.

I then of course had to rant on chowhound. It turns out a lot of people had the same beef.

After that, I read the labels religiously before I buy a new brand. There are a lot of fakers out there. They also tend to have less protein.

That’s pretty bad. I really hate when yoghurts are all gloopy, you can tell they’ve added thickener and sugar. Like you, I use plain greek yoghurt on everything – I buy sachets you make at home overnight, which work out cheaper and have no added ingredients beyond cultures and milk solids. It is processed but it’s the most convenient thing for us as we eat 1kg a week between two.

When yoplait and dannon jumped on the greek yogurt band wagon I knew something was up – there is just no way companies like that are going to make a quality product without trying to cut some corners and add some shelf life to it, greek yogurt is NOT a new product despite most Americans thinking it is – check out the companies that have been producing it for decades, they are the safer bets

That’s disappointing to know about greek yogurts. i am a fan of Fage yogurt, will look at the labels a bit closer. i find Chobani to be to sweet. thanks for sharing

I love my greek yogurt. I wasn’t a yogurt fan until I tried the greek variety. Fage flavors are my favorite. I add sunflower seeds to mine to give it some crunch without added carbs.

A favorite Greek yogurt brand for me is Olympus. It’s not too sickly sweet like Chobani and the fruit flavors are super delicious.

This article completely validates why I make my own yogurt. It is so much easier and cheaper and tastier than store bought and even though you have to start out with “the cultures of another yogurt” it is only a little spoonful and the more you make your own yogurt the better it gets because you use a spoonful of yogurt from the batch you made last week. I know a lot of people who aren’t into the making-your-own-yogurt thing so just buy your regular brand of yogurt and strain it yourself with a paper towel and a fine grain strainer. Mmm, there are so many good ways to get yogurt into your life without all the weird additives and such that these companies are trying to pull….

This is why I make my own yogurt.

I damn-near had heart failure when I saw the title of this article thinking there was an evil side to greek yogurt. I pretty much rely on it as an easy but nutritional snack or breakfast (especially with my new mouth grill, aka, braces). Informative article, and like Curlsz stated I knew there had to be a difference in product quality between companies like fage and yoplait, without taking time to read the labels.

This is why I go to my local greek store. The owners mother makes the yogurt. It’s amazing and tastes nothing like what you would get in the super market. Plus it’s around the same price.

Thank you for the info and reseach. I LOVE my greek yogurt. I havent been eating it for too long, but the other yogurt started getting too thin for my liking. I mix Chia seeds into my yogurt for extra protien, fiber and omega 3. Together, they are a one two knock out for my diet. If you dont like Fish Oil…try Chia seeds ( no taste, but fun to eat ). Live, Love, Laugh and fitness!

Oh, JFC. Of course I’d been eating the Yoplait Greek yogurt because it was cheaper than Chobani’s, not thinking about the difference in the ingredients and whether one was manufactured more than the other. Damn. They try to get you wherever they can, smh.

Pardon me, may I have the “I do everything from eating it with cranberries, cashews and almonds to mixing it with curry and peanut sauce (pronounced “SAWSE”)” recipe please? FAGE is all that I eat.

Yes. I’m getting there. Lol

The ingredient in my greek yogurt is cultured grade A milk. Is that ok? I only buy plain yogurt and add my own fruit and granola to it using your granola recipe minus the chocolate :-).

Guess I’ll be sticking with Fage. Smh @ Yoplait & them.

I discovered this a while back when I was using the weight watchers method so I was comparing labels of similar yogurts – name brand vs. store brand. I found that some varieties had a lot more ingredients than others. Now, I only buy dairy products whose ingredients are simply: milk (or non-fat milk) and culture or whatever else *shouuld* be there. If it’s a chemical name instead of an ingredient, I avoid it like the plague.

I really enjoy your blog and wanted to offer a way to may thicker yogurt from plain whole fat yogurt, which I make occasionally.

You just take a large container and strain it with cloth or a paper towel lined colander for a few hours. Keep the liquid to throw in some acidity to a pot of soup or beans, or use my teacher’s recipes to try a new dish.