Home What Are You Eating? Ice Cream is Supposed to Melt…Guess Which Brand Doesn’t?

Ice Cream is Supposed to Melt…Guess Which Brand Doesn’t?

Of course: Walmart. From HuffPo:

The discovery was made by a local mom, Christie Watson, who noticed that a Great Value ice cream sandwich her son left out on their patio table hadn’t fully melted — even though it had been sitting out for 12 hours on an 80-degree day. Watson left a second ice cream sandwich out overnight with the same results, WCPO reports.

“What am I feeding to my children?” she asked, appalled.

“Ice cream melts based on the ingredients, including cream,” Walmart spokeswoman Danit Marquardt said in an email. “Ice cream with more cream will generally melt at a slower rate, which is the case with our Great Value ice cream sandwiches.” 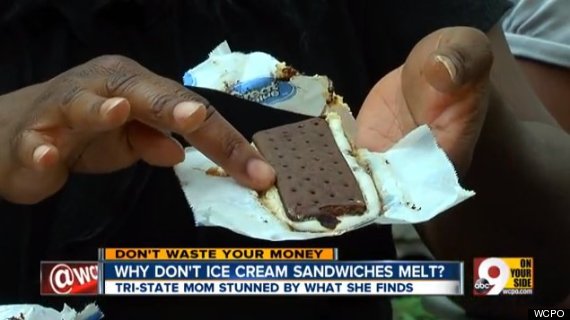 So, methinks they’ve got the science wrong on that. Cream contains water – in fact, the thing that separates cream from butter is the amount of water in it. That being said, anything with cream should actually melt faster, because the only reason cream is a solid instead of a liquid in the first place is because of the lowered temperature. Remove the temperature, and the cream should go back to it’s regular creamy state.

In other words, no, cream should not “melt slower.” The only reason an ice cream sandwich would fail to melt would be if it had an extensive amount of thickeners in it.

And, as Business Insider apparently pointed out, this was exactly the case:

Guar gum, carob bean gum, cellulose gum, carrageenan, calcium sulfate, and diglycerides are all coagulants – thickeners – and emulsifiers, and are apparently strong enough to hold the shape of the sandwich regardless of the temperature, percentage be damned.

In the WCPO video, the news station reports Walmart’s response as:

Ice cream melts based on how much butterfat and cream are in it. Our sandwiches contain less, and are more affordable. But they are healthy and meet all FDA guidelines.”

Weirdly enough, the reporter goes out of his way to state how there’s “nothing wrong” with the sandwiches, as if he’s concerned about appearing biased.

The station laid out a Klondike bar – with an ingredient list similar to the Great Value Brand bars – as well as a GV bar and a tub of Haagen Daas ice cream. Unsurprisingly, the Haagen Daas melted fastest.

The thing I want to point out, though, is how the second quoted Walmart response passively makes a point about food supply: by saying “Our sandwiches contain cream, and are more affordable,” they’re basically saying that they can’t sell ‘affordable’ ice cream without loading it up with thickeners. Their schtick is the same as any processed food manufacturer: water down the real stuff, load it up with additives so that the texture is stilll similar, sell it as overpriced. Even the newscaster says it – you can get 12 ice cream bars for cheaper than a tiny tub of Haagen Daas, as if that’s supposed to justify everything.

As much as I hate to say this because I’m fully aware of the implications, but if cheap ice cream treats mean getting ice cream that doesn’t melt… maybe ice cream shouldn’t be that cheap, anyway?

Friday 5: Five Places To Get Workout Clothes On The Cheap

WOW… first off, I love your blog Erika! Soooo Happy I came across it one day last month when I googled “Black Girls and Eating Clean”, lol. Your site was the first one to pop up! I am re-starting my journey to become more fit and eating clean. I look to your great site for tips, help and motivation. Thank you for creating this blog. 🙂

Now, as far as this article, THANKS AGAIN! My kids like ice cream sandwiches as an occasional summertime treat, and the sad thing is, I usually purchase the GV brand pictured above. I have bought the other kinds (which honestly taste better and MELT FASTER) but are more expensive… I will eat Haagen Daz myself, and I feel guilty about giving my kids this crap. It stops today! MY journey has become OUR journey to healthy lifestyle. 🙂
Keep giving us that news we need to know Erika and continue the wonderful job! If you have a conference or something, girl, I am there! 🙂

Ha! The Walmart response is comical. I’m so disgusted and thank God I’ve never eaten one of these ice cream sandwiches. This needs to be on every news station all over America for hours at a time. If the sun cannot melt this “ice cream sandwich”, what on earth can your body do with it? Ugh. I don’t want to think about it!

It’s like glue in your system and also toxic. What is she feeding her kids? What is she eating also? I love the and “it’s approved by the FDA”. FDA needs to put a warning on this how can they even approve this for consumption. There is so much thickener in there that it’s like a heavy paste. Cream? is there any even in there. They shouldn’t even call it ice cream then.

Ice cream for me as a child was Baskin Robbins and Haagen Daas. It was a treat that we had now and then, just a scoop. This is right up there with the McDonald chicken nuggets that don’t seem to have an expiration date.

I find eating unprocessed food gives me a lot of energy and I feel good. My digestion is great, also don’t have to stress over cravings.