Genetically engineered fish, AquaAdvantage salmon, or “frankfenfish,” depending on your viewpoint, are closer than ever to FDA approval, reported Newsy. 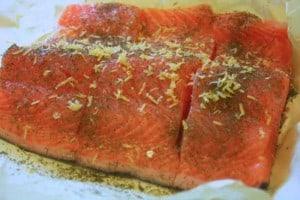 My own salmon… that I might be giving up after hearing this. 🙁

The salmon, engineered by the company Aquabounty, grow twice as fast as normal fish and “would be the first approved scientifically engineered animal for human consumption,” reported KTTU.

The FDA claims that the altered fish are as safe for the environment as any other fish, writing in a recent assessment that they “will not have any significant impacts on the quality of the human environment of the United States,” reported the Christian Science Monitor.

Environmental groups fear that the altered fish could cause human allergies and escape and breed in the wild, which, they say, could lead to the end of natural salmon populations.

After a 60 day public comment period ends, the FDA will in all likelihood approve the salmon for sale and consumption.

If approved, the fish will likely not have to be labelled as genetically modified. [source]

Welp. Unless I can find a local purveyor of salmon, I’ll be hanging that up.

I just… I have so many questions about this.

And what about the salmon in the wild? What kind of effect will this genetically modified salmon have on the cost of what’s already available, and wild-raised? According to reports, AquAdvantage says that the aim is for all of the female GM salmon to be bred sterile, but they can’t guarantee that 100% of them will actually be so, with somewhere between 1-5% in limbo. What then? Since the aim is, apparently, for 15 million eggs to be created, we’re talking about 750,000 potentially sterile genetically modified fish. How likely does it feel, now, that these salmon could escape and breed in the wild with your wild-raised salmon?

In fact, I’m willing to bet that right now, your Whole Foods store has a little sticker on its seafood window that answers the question, “Why isn’t any of your seafood organic?” with some mumbo jumbo about how the FDA doesn’t regulate the phrase “organic” in terms of how seafood is raised, and that’s true. But, if genetically altered salmon is allowed to move forward to stores, will that change? And who will conduct regular testing to ensure that people who don’t want any parts of a genetically altered salmon don’t get any parts of one?

And, furthermore, what is this business about infection and jaw erosion? Erosion? Of a body part? And I’m supposed to eat that? Infection? Because handling that works out so well with cows? C’mon, man.

Can we talk about the money, too?

Salmon, naturally, is an expensive protein, regardless of whether it’s farm raised or wild-caught. This fish, though it only grows twice as fast, eats five times as much food. How does this affect its price? Five times the food is going into a fish that only grows twice as fast, not five times as fast. As a farmer, what’s the benefit of this? Buying sterile salmon that can’t procreate with itself, which means I have to continuously re-purchase eggs from AquaBounty; I’m using five times the amount of food and not getting five times the amount of fish; what is the benefit of investing in that? Even if no one other than AquaBounty farms the salmon (and, you can rest assured, the goal is to go far beyond that, even if it would be the case at first), how will it be profitable? Do they truly think people will pay more for a genetically modified product, when the original is already pricey enough per ounce of protein?

And, because this may make actual regular, naturally-raised, wild-caught salmon more of a commodity, will the price of that increase?

This quickly becomes a “why bother” type situation.

So, I guess the question to ask, is… how can we expect to find the good stuff now? Where do you plan to go to get your wild-caught salmon? Share the good spots, and help out your fellow clean eaters!

Priced Out: Too Expensive to Buy Healthy?

I would say that I’m shocked but I’m not. I read that they are also trying to do the same thing with chicken. This will just turn me off from eating salmon from any store. I know how to fish and enjoy doing it too! I think what does amaze me though is that it won’t be labeled as genetically modified. I think that is unfair because it takes away my right, as a consumer to decided. I also think that there has to be some secret undercover motive to why this is being passed (Yes! I am Conspiracy Sister) because you are right, it is not befitting the farmer (because they sure aren’t fishermen)! This GM thing really scares me. It is the reason that I stopped eating corn, unless I grow it myself using an heirloom seed. But thanks for the heads up!

I am abhorred!!… This has to stop… I too have questions, though many mirror Erika’s… The only way you can feed something five times as much food for only two times as much growth is if you feed it crap!!… For example, I can feed you five McDonald’s cheeseburgers for much less than I can feed you the homemade version I create with organic grass fed ground beef, [truly] whole wheat buns [with only a few ingredients], organic produce as toppings, etc… You get the picture… This makes me sad bc I LOVE salmon, but if this pending approval goes through I’ll be getting my omega 3s elsewhere… It should NOT be this hard to access healthy, unprocessed, non-GMO food in this country… I just… I need a plot of land to grow/raise my own food, with a lake that can sustain seafood…

Wow,
This is getting ridiculous now with all of these genetically modified foods. The FDA has not asked themselves why the American population is full of health related diseases. Genetically modified foods is not healthy for ingestion. The seafood especially salmon also have high mercury levels, Now there giving people “frankenfish” to consume and will over charge for wild caught fish. What are the long term effects on the human body. I wish people would stop messing with the food. The reasons why i stopped consuming animal and went vegetarian cause of these stories This is disgusting, We must demand better. The farmer’s market usually have wild caught fish.

Reading this article makes me so angry! Why is the quest for the almighty dollar bill so strong that we can’t just leave well enough alone. Salmon is my favorite fish, and I eat it on the regular. As you stated in the article, there’s no regulation that will prevent frankenfish from mixing with the rest of the salmon population – NONE. This makes me want to go to Alaska and catch salmon swimming up stream just like the grizzly bears.

This story makes me think of the book/movie Jurassic Park – when man plays with mother nature for a profit….and look what happens. I know that the salmon won’t get up and eat us humans, but the carnage that will take place on the inside of anyone who eats this will be serious.

WHY, WHY, WHY!? Why can’t they just leave mother nature alone. Dangit!!! It’s really getting on my nerves. Why do we need modified salmon? We don’t. I can’t ….

Love salmon but I will say bye bye to it. Unless I eat it in a place where I see them actually catch it.

Call me crazy but sometimes I feel that they are trying to weed out the population. I am sure the 1% won’t be eating genetically manufactured salmon.

Really is this all a racket? They know these food causes medical problems due to malnutrition. I feel that they are creating a profit stream once you and eat this over time you will get sick, spend money on doctors and medication, it’s just a cycle to keep making profits for the medical and pharmacutical establishment. I feel eating the food with no enzymes and very little nutritional values over time isn’t good for you. I feel it promotes a short life span overall.

If you aren’t aware your basically screwed. No wonder why people are getting fat, dropping like flies. You need the enzymes for the natural salmon to nourish you body.

Things like this is making it real easy for me to slide into the vegetarian camp. I hate it and it makes me feel marginalized as a consumer but thanks for the push out to get healthy and opt out of the mainstream market.