Home What Are You Eating? Another Peanut Butter Recall: Why Does This Keep Happening?

Another Peanut Butter Recall: Why Does This Keep Happening? 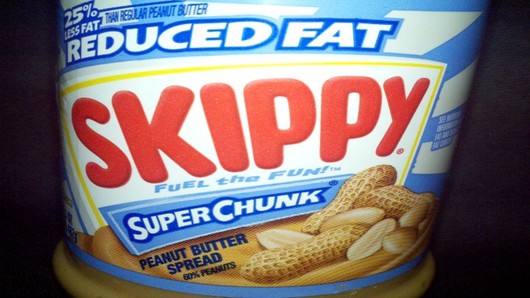 Bacteria found in batches of Skippy peanut butter has prompted a recall in 16 states.

No illnesses to date have been reported related to the recall, the release says.

The limited recall is being conducted in cooperation with the Food and Drug Administration.

If you’re in – or near – one of these states, and you’re still buying this stuff… consider tossing out your sandwich for today until you can verify that your peanut butter isn’t from one of these contaminated jars.

The company conducted its own tests and uncovered the contamination, but that leaves me to wonder – how often do they conduct these tests?

But seriously, how does salmonella contaminate peanut butter?

As I started digging to answer this question, I realized that Scientific American had already answered not only that question, but many more that I know y’all would have:

How does salmonella get into peanut butter?

Feces from some animal is a strong possibility. A leak in the roof, for example, caused one of the early outbreaks. How salmonella got into the water that was on the roof, no one knows for sure. Maybe birds, for instance, which accumulate around peanut butter processing plants.

The roasting of peanuts is the only step that will kill the salmonella. If contamination occurs after the roasting process, the game is over and salmonella is going to survive. Studies have shown that salmonella can survive for many months in peanut butter once it’s present. Fatty foods are also more protective of salmonella, so when it gets into the acid of the stomach — which is our first line of defense — it may not get destroyed.  Peanut butter, being a highly fatty food, could survive better.

I’m actually putting my money on rat feces in the peanut butter, especially since the FDA already makes allowances for insect and rat parts in your peanut butter.

Why have these outbreaks only happened in the past 15 years?

Some of these processing plants are quite dated, and that may be part of the problem.  They just haven’t been maintained.  Thirty years ago when they were built, they didn’t have leaks like that.

Is there any way to destroy the bacteria once it’s in there?

Not by current procedures.

Theoretically, you could irradiate it. It’s not an approved process. And because it’s a high-fat product, you’d get a lot of off odors because of lipid oxidation.  I’m not sure radiation would be good approach.

We have done thermal inactivation studies on trying to kill salmonella in peanut butter. But even when you get up to 190 degrees Fahrenheit (90 degrees Celsius), it takes many minutes and might affect the integrity of the product.  Heating may not be an easy fix.

So, how can you keep salmonella out of peanut butter in the future?

The key is to have a rigid system in place that does not allow contamination by water or other vectors after the roasting process.  Water in a peanut butter processing plant is like putting gasoline on a fire.  It will not only spread the salmonella, but the salmonella will grow when water is present.  Salmonella is not likely to grow in a dry environment.

How can we avoid salmonella in our peanut butter? 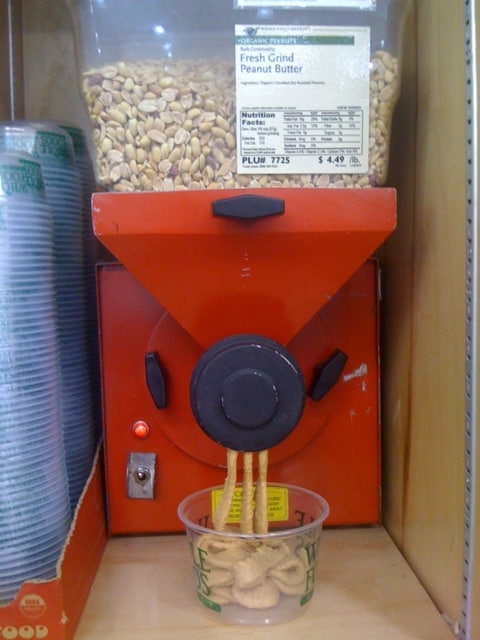 Try to find a grocery store that grinds the peanut butter in-house and sells it individually packaged, or a store that has a grinder that you can use yourself. At least that way, you cut down on not only the potential exposure to salmonella, but the apparent prevalence of rodent fur and insect pieces in your peanut butter.

I’m… not even kidding, here.

Q&A Wednesday: He Won’t Stop Complaining When We Work Out!

“At least that way, you cut down on not only the potential exposure to salmonella, but the apparent prevalence of rodent fur and insect pieces in your peanut butter.”

I just threw up a little in mouth there. I will never look at peanut butter the same again! I wonder if organic peanut butter might be any better.

The FDA needs to man up and conduct more investigations on these places! Grrr.

Omg! I think I just threw up in my mouth. I eat peanut butter out of the jar with a spoon at times. I typically stick to the organic or raw varieties,but now I’m worried anything from a factory may not be safe. I had no idea there were provisions for insect and rat parts by the FDA. Thanks for this info. I was already headed that direction, but now you’ve given me all the push I need to start grinding my own nut butters at home!

I tried the in-house pb a while ago, but it didn’t have salt and I like a pinch of salt in my pb. But I do feel safer buying it from a smaller store or smaller brand. The only ingredients are organic peanuts and salt.

The last time this happened, I didn’t eat peanut butter for over a year. Guess I’m off of it again until I locate a grocer with a peanut grinder. How did u find your grocer?

Both my Publix and Whole Foods have ’em. Perhaps y’all should get together and start harassing your grocery chains to get on the ball?

Its so SAD that our “great” government allows such digusting things into our food! I encourage people to grind their own peanut butter, almond butter, cashew butter…The bonus is watching your children make the peanut butter. Thanks for being proactive and promoting a healthy lifestyle!

I highly doubt buying organic peanut butter is going to prevent any bugs or mice from getting into the mix. Mice LOVE peanut butter. They will find their way into the grinder if they really want to. If you are grossed out by this I wouldn’t eat anything I didn’t grow and I would never eat out. The salmonella is really nasty and there is no excuse for it but the other stuff when food comes from a factory it is bound to happen. If they can chew their way through concrete they will get to the food. Call me gross but as long as I don’t find a claw in my pb &j and it is tested to insure there are no food borne illness creeping around I really don’t care.

I full hearted agree with you, unless you grow it in your own backyard there’s always that possibility of contamination. Pretty much everything we eat is manufactured and/or processed in some way, including those nuts in that grinder. Whose to say those grinders in the stores are kept up to par as far as being cleaned properly; whose to say the employee who actually put those nuts in the grinder used proper use of the utensils; whose to say that employee wore gloves or probably washed his/her hands before filling the grinder up. Bottom line, we just never know and there is always that chance of contamination (and cross-containation) no matter what we eat.

I mean, sure – unless we do everything 100% ourselves we don’t know, but c’mon. Rest assured… a nut grinder in the middle of an organic produce section is almost guaranteed to be cleaner. There’s a HUGE difference between a grinder that I, personally, can inspect at a store that I, personally, can inspect… and a factory that NO ONE inspects – I’m sorry, that the manufacturer inspects at their leisure – grinding my peanut butter.

I respectfully disagree. Unless you work in Whole Foods, etc., you don’t know how clean the grinder or more importantly, the grinder dispenser may be. Imagine how many people have their hand(s) on and under that grinder dispenser – no different from an ice cream dispenser at the buffet line. We also don’t know what’s crawling over that dispenser when the lights are out. No kidding. I am not a pb fanatic, but I’ve decided to make my own pb when I want some. My own food processor, olive oil, dash of salt and some peanuts. It’s a shame we can’t buy plain ‘ole peanut butter without drama!

You disagree that… there’s a huge difference between a grinder in a store that is in front of you that you, for yourself, can gauge its cleanliness and a vat in a factory that no one inspects?

I mean, of course homemade peanut butter is ideal… but to imply there’s NO difference? That’s a stretch, IMO.

I didn’t know there were grinders in stores. I want to find them!

The only place I’ve seen a grinder was in my family’s old house in Haiti.

I’ve tried to make peanut butter in the past and it’s just a messy mess. I want to feel somewhat comfortable buying peanut butter for my kiddo. I buy the organic one at Costco but even that has been recalled so there’s no brand you can trust.