For every pound you want to drop, there’s a diet plan, surgery, high-tech gadget or reality-TV show promising to get you to your goal, faster, cheaper and easier than the rest.

But what happens if you strip away the conveniences of today’s high-tech, “we want it now” world, and try to lose the weight the hard way?

One Colorado woman did just that and succeeded, losing 300 pounds in nearly three years all on her own, with no surgery or gimmicky diet to take credit. 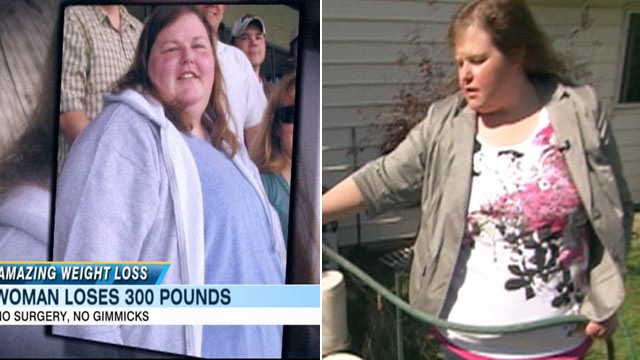 “There is no magic bullet,” Shannon Davis told “Good Morning America.” “You cannot lose weight without putting in the time and effort.

And sweat is certainly something that Davis — a 39-year-old master’s degree student who also works full time and cares for her mother — knows something about.

She is now committed to a seven-days-per-week workout routine that consists of an hour of cardio for four days and weightlifting with her trainer the other three.

That is a far cry from where Davis found herself three years ago — a 589 pound woman unable to leave her Broomfield, Colo., home, much less jump on a treadmill.

“I was afraid to go out,” Davis told “GMA.” “I knew people would stare, judge me and make comments about me.”

Comments from her friends made her say enough was enough. They warned her she was going to die if she didn’t change.

So she got off the couch and headed for a local gym, but couldn’t even make it one step on the treadmill.

“There was no way I could walk on the treadmill at 589 pounds,” she said.

But she kept moving.

“I’d go back to the pool and walk back-and-forth for an hour,” Davis recalled of the first days in her weight-loss journey. “I didn’t want people to see me. I wanted to be invisible.

“Things have changed a little bit,” she said.

Changes for Davis have come not just on the outside — she now stands as literally half the woman she used to be — but on the inside as well.

She no longer beats herself up over food cravings and has learned to enjoy an indulgence, in balance with her everyday, healthy diet.

“Everybody messes up,” Davis said. “That’s the thing about dieting everyone needs to learn: Everyone makes mistakes.”

Davis says she follows a healthy diet of three simple meals per day, and stays satisfied with the reduced intake compared to her previous daily calories by focusing on the quality of the food, not the quantity.

“I eat quality food,” she said. “Lots of greens, lots of vegetables, lots of lean meats. I love apples.”

But that doesn’t mean she’s immune to cravings. She has learned, over a long, hard three years, how to handle them.

“If there’s a cookie around, I want the cookie,” Davis said of her favorite treat. “You have to forgive yourself and you have to indulge on occasion.”

But indulging for Davis now means celebrating with friends, not food, something she would have never even considered three years ago when she spent her days alone in her home.

This weekend Davis will host a “300 Pound Down Party,” bringing together the network of friends from across the country she’s assembled along her journey down the scale.

Each friend is on a path similar to Davis’, an element she sees as crucial to her weight-loss success. “It’s so important to surround yourself with the best people — people who won’t sabotage you, won’t say, ‘I don’t think you’re going to make it today, won’t put you down,'” she said.

Davis’ journey has led her now to want to give to others the tools she used to succeed on her own.

Davis says her next step, far from that first step she took to the gym so many years, and pounds, ago, is to start a nonprofit organization to pay for gym memberships and personal trainers for obese people.

Asked if she was proud of her body, she replied, “I’m getting there.”

My Thoughts on Gabourey “Gabby” Sidibe

“Hot Moms,” Excuses, and the Trouble with Fitsporation

A Workout Program You Can Believe In: Woman...

So inspiring and what a great follow-up to that 50 Cent story! This woman is so focused and committed. And yes, there is no short cut or “easy way out”!

This was a wonderful way to start my day. I just got in from my 3 mile “wog” (walk and jog) and I am more inspired to do my best today. Thank you for sharing this. I toast my water bottle to Shannon, to you and everyone else on their journey.

Thank you for posting this story! Got me out of the blues for the day and I’m back on track!

I want that to be me next year. lol makes me feel like I can do it and she was heavier than I was at her starting point.

This is truly an inspiring story. I t00, am trying to di it “the right way”. It is tough, but a story like this shows me that it can be done!

Just another powerful reminder that it can be done regardless of the starting. All that is needed is dedication cheers Shannon !!!

Thanks for the inspiration! I soooo needed that! 🙂