Home Sweat Equity A Workout Program You Can Believe In: Woman Loses 100lbs Through Marathon Um…Sessions

A Workout Program You Can Believe In: Woman Loses 100lbs Through Marathon Um…Sessions

I figured I’d start your Monday off right, so I’m just gonna leave this here:

The heaviest woman in the world is using an unusual method to shed serious pounds – sex. 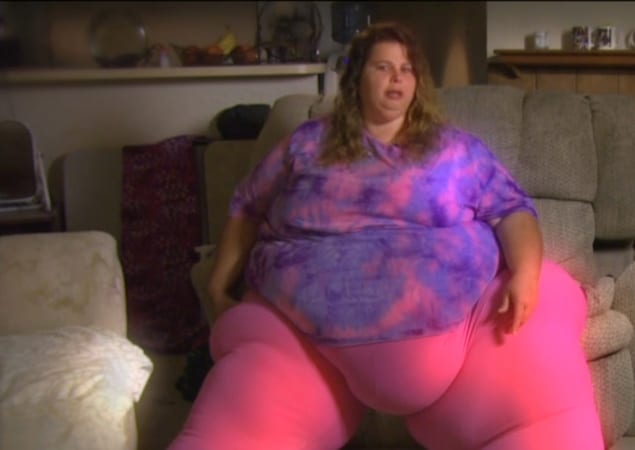 “I sweat off loads of calories,” 600-pound Pauline Potter revealed in an interview with UK magazine Closer this month. “I call it ‘sexercise.’”

Potter, 47, became the Guiness World Record holder for heaviest woman last year when she weighed in at 700 pounds, but she’s managed to lose nearly 100 pounds in the last year by rekindling her romance with her ex-husband Alex.

Married for three years, they split in 2008 but reunited when he heard about her Guiness title last year. It didn’t take long for them to land in bed together – repeatedly.

“I hadn’t had sex in three years, but we did it six times!” she told the magazine, adding they now make love between two and seven times per day. “He took charge as I couldn’t move much, but he was so attentive.”

Though their relationship is long distance at the moment – Potter lives in California while Alex is in Arizona – he has made extended trips to see her so they can continue their marathon sex sessions.

“I can’t move much in bed, but I burn 500 calories a session. It’s great exercise just jiggling around,” she told the magazine. “My bed is strengthened and, although I can’t buy sexy lingerie, I drape a nice sheet over me.”

Potter, who has helped speed up her weight loss by exercising in the pool three to five times a week and cutting out most of the junk food in her diet, said she wanted to share her story to satisfy some curiosity she had encountered.

“I found that a lot of people in this world are intrigued that fat girls like sex too,” she told HLN’s Dr. Drew.

The mother of a 14-year-old son, Potter said her weight loss isn’t just about sex – it’s about gaining a healthier lifestyle.

“I want more and I don’t want my life to slip away and possibly die from this,” she told Drew.

Though she already weighed 400 pounds by the time she gave birth to her son, Potter said she binge ate when she and her husband divorced and ended up packing on the pounds.

“I was so down, I’d eat four bowls of cereal for breakfast, half a box of cookies and a bag of crisps with cheese as a mid-morning snack,” she told Closer. “For lunch I’d have a Big Mac with chicken nuggets and fries, then three portions of spaghetti Bolognese for dinner, followed by a pint of ice cream.”

Soon after her weight had climbed so high she couldn’t leave her house without using a motorized scooter.

But Alex still thought her size was sexy – despite the occasional logistical issue.

“It’s hard to position her and find her pleasure spots as she has a lot of fat in the pelvic area,” he told the magazine. “But it turns me on knowing she’s satisfied. Although once, when she got on top, I couldn’t breathe.”

Potter plans on keeping her relationship – and her weight loss method – going for the long haul.

“If you were to ask me what was going to happen a year from now,” she said, “I would say I will have lost a good amount of weight and we probably will end up married again.”

The Beauty Shop: How Does Your Job and Dating Life Affect How You Wear Your Hair?

Understanding Calorie Counting: The Payoff – Why Am I Doing This To Myself?

“Hot Moms,” Excuses, and the Trouble with Fitsporation

Lol! That’s what I was thinking

Well the best exercise is one you enjoy, and will keep up consistently……

Wtf really…ok…so the ex left to come back after you meet a ridiculous record, wait stop, are we not addressing the emotional eating… Ok so we wont but why are you sexing this man with no commitment or at least without healing emotionally so if he leaves again you wont binge again…but forget all that a sheet, a nice one at that instead of lingerie…then this man that can cum and go as he pleases(pun intended) gets credit for the weight loss instead of her eliminating the junk food for real yall and we want to blanket this mess under the term sexercise…ok cool. The tv station should be ashamed and not, cause of her weight but because of the emotional foolishness this is trying to perpetuate….it wouldnt matter if she was 96 lbs and lost 5lbs nothing about this was healthy or promoting a healthy, whole person. Ive been lurking but had to come out for this one shoot… And they put it in the form of a news report like they did something!

i too am a lil perturbed that he comes back after she gets some type of recognition. i think the weight loss has more to do with her pool workouts and junk elimination that the other activity she engages in. i dont know her life so i cant say much. just hope he isnt using her. either way it’s positive that she is making changes that gear away from just wanting to be the fattest person.

Died at this: “He took charge as I couldn’t move much, but he was so attentive.”

Really? You have eaten yourself to the point of incapacitation where you cannot be an active participant with your partner. Wow! She was striving to be this large? Wow again! I don’t know what to say.

The best part…. “Although once, when she got on top, I couldn’t breathe.” This isn’t hard for me to believe.

But, really… good for her.. something/someone for everyone!

Holy Guacamole. Is she every going to address her emotional eating habits?

the absolute best line…”Although I can’t buy sexy lingerie, I drape a nice sheet over me ” #noshade but LMAO.

Yes! this flippin’ killed me. I don’t even know what to say

Although I wouldn’t want this story published if it were me, I have to say I’m happy for her.

She lost 100lbs and could potentially get her family back, that is wonderful!

Hopefully she will address the emotional eating
too.

I had to stop for a second when I read that since she cant wear nice lingerie, but she drapes a nice sheet over her??? Wow

I might be wrong but I laughed until I cried about the “nice sheet”. She does have other issues to address but this is a good start. She has recognized that she has an issue and has found a way to solve the problem. This story is somewhat inspiring because if she can lose that much “jiggling” then I know I can lose more with walking and improved eating habits.

“Although once, when she got on top I couldn’t breathe”

Officially dead at that quote. In all seriousness though good for her at least she’s doing SOMETHING to get healthy. That’s a workout I wouldn’t mind doing EVERY day!!!

You have to start somewhere. If that works for you then good for you!! Just continue with eating healthy and your exercise and you’ll get where you want to be. Good Luck!!

So, this sounds like a sex addiction in the making. Trade one addiction for another.

My morning wasn’t going too well and i was looking to turn it around. this article did the job. #dead at he couldn’t breathe. oh my. i know there’s serious stuff to be addressed but i can’t.

At 700 pounds, if having marathon sex is what works for you to loose weight, I say go for it. Deal with the other issues later.

It is most likely that the fact that her husband is willing to have sex with her again is helping herself estime, thus she has been able to reduce the emotional eating. I doubt that she can burn that many calories given her lack of mobility. I do wonder how many calories he is burning putting in all that work…..

Then again, because of her lack of mobility and sedentary nature, ANY activity is overwhelming for the system and revs it up to an excessive rate.

Think about people who are sedentary, who struggle with climbing stairs. They don’t move often enough, so climbing the stairs is HARD WORK. Because the oxygen is flowing so fast and the heart is beating so much, calories burn much faster than for someone who’d be smaller and more fit.

OK. I about fell over at the nice sheet comment too. This is obviously someone who wants media atention. Why else would the story lead with marathon sex sessions lead to weight loss. When what has really helped her is cutting the junk food and getting to the pool. ” Potter, who has helped speed up her weight loss by exercising in the pool three to five times a week and cutting out most of the junk food in her diet,”

He is fetishizing her. He has a fat fetish and once she’s down to a decent weight, he will either be out the door or start sabotaging her healthy weight maintenance. I met a man once when I was more than 300 pounds who told me that if I lost 100 pounds, he would feel the same about me as Jay Z would feel about Beyonce if she GAINED 100 pounds. These men don’t Care about you, your health or fitness. They get their sexual kicks off of your fat. Love thyself and run in the opposite direction. I notice there was no mention of him wanting to remarry her. He knows she’s headed for a lighter weight and once she gets there, he won’t be interested.