Adventures In Advertising: Using And Abusing The Farm Image 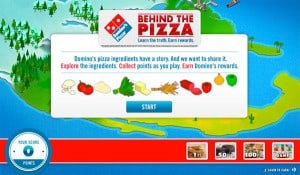 I can think of at least – off the top of my head – five brands that use a farm in some form or fashion on the packaging of their products as a means to compel people to purchase their products.

And why wouldn’t they? The image of the farm is a wholesome one for most of us. You think “local,” “human-made,” “simplified,” “hand-made,” “home made” and any other cute and cozy descriptor. The farm – despite how we might abuse the farmer nowadays – is a cherished image for many of us, and using it on packaging has always served as a form of a “halo.” If we see a farm on a package, we automatically assign those descriptors to that product… thereby thinking the product is “hand made,” “home made,” “simplified” or whatever.

Here’s why you should stop doing that:

In a new marketing campaign called “Behind the Pizza,” Domino’s Pizza (DPZ) is apparently targeting a demographic of people who think modern restaurant food is grown entirely in test tubes. How else to explain the campaign’s interactive web site, which appears to be designed to deliver the stunning news that some of Domino’s ingredients actually start out on a farm?Among the shocking revelations you’ll learn on Behind the Pizza, which features Legoland pictures of farms and a looped audio of birds chirping and pigs oinking, are:

Thank goodness they’re not cutting corners with those fake cows used by other pizza chains.

This empty attempt to cash in on Americans’ growing interest in learning where food comes from is made even worse by that fact that Domino’s hasn’t actually bothered to make sure that most of its ingredients are “100% real.” The people who put together the campaign have managed to overlook the fact that Domino’s ingredient list, which features yummy farm fresh items like sodium benzoate, yellow #5, BHT and propylene glycol, is headlined with the phrases “Nature’s tasty little building blocks” and “Really good ingredients.” (Or maybe they just didn’t get any further than the headlines.)

I’d hate to see the list of “bad” ingredients.

Lately Domino’s has distinguished itself for bold and authentic marketing, notably its ads admitting the pizza used to suck. But this isn’t one of those admirable initiatives. Behind the Pizza is little more than standard farmwashing, whereby a food company tries to convince us that its food is fresh off some family farm where the animals all have names and the vegetables are collected in straw baskets. Unless Domino’s is doing something truly amazing with its supply chain that we don’t know about, most of its ingredients are likely coming from the large, industrial, highly efficient factory farms that now dominate U.S. agriculture.

Domino’s, however, is taking its farmwashing effort to new heights of absurdity. Each storybook farm on its web site shows an image of an on-site Domino’s restaurant with a disclaimer that reads, “There is not a Domino’s actually at the farm” — a statement that will no doubt come as a horrible disappointment to the low-paid immigrant workers who populate America’s farms.

There are, in fact, a few examples of natural simplicity on Domino’s menu — the green pepper topping for pizzas is just green peppers and the pizza sauce is comprised of just water, tomato paste, sugar, salt, spices, garlic, soybean oil, and citric acid, for instance. But these few “100% real” examples are swallowed up by a tsunami of highly processed chemical ingredients.

It’s hard to understand why Domino’s would want to draw attention to the fact that its grilled chicken contains fillers like modified food starch and soy protein concentrate, and that its blue cheese sauce is made with titanium dioxide, a substance better known for its use in paint. Even the “100% real cheese” touted in ads is probably more like 50% real. The ingredients:

Maybe next time it would help to loop in the guys in R&D before building a campaign around ingredients. [source]

Advertising is a sort of slight of hand. If I can make you focus on me picking up a rabbit with one hand as I prepare to drop it into my hat, you’ll never notice how I’m opening a trap door with my foot to drop the rabbit straight through it. If I do what I can to convince you that you don’t neeeeeed to worry about the ingredients in their ingredients, then surely you don’t need to double check behind them, right?

Wrong. If there’s anything we should know by now, its that the larger the company, the more industrialized the product has to be in order to ensure that it tastes the same at every store that sells that brand. That’s why you can get a McChicken at any McDonalds in the world and it’ll taste the same. A farm in NoWheresVille, Wisconsin cannot produce that, no matter how hard they work.

There’s also this issue of price. One medium Domino’s pizza costs $11 where I am. Eleven darn dollars. (Do you know what I could do with $11?) $11 covers “100% real cheese,” farm fresh tomatoes crushed for tomato sauce, freshly-mixed and hand-tossed dough made from ingredients found in the average kitchen topped with rich herbs and spices?

Let’s be real. Eleven dollars couldn’t cover the cost of providing that to the public without some shortcuts like… “perservatives” to extend shelf life, “food starches” to “thin out” and extend the product they do have, “flavors” so that they don’t have to use actual herbs and spices to flavor the ingredients and “skim milk” mozzarella cheese instead of mozzarella made with regular (or even raw) milk.

I’m just… I’m not impressed. No one should be. Marketing is intended to present a specific image to the viewer, with the full intention of convincing you that [this] is why you should give your money to [us.] Don’t fall for it. Save your money: make your own pizza dough, your own pizza sauce, buy yourself quality cheese and make a better pizza… and let’s hope that the advertisers leave the “slight of hand” games to the magicians.

Genetically Modified Foods: The World According To Monsanto

5 Reasons to Give Up the Sugar for Good

Fresh and Easy (I LOVE THIS STORE) has fresh dough (wheat, regular and focaccia)in a neat little ball already to go for $2. You just have to roll it out and add your sauce and toppings! So much easier and healthier then calling up Domino’s.

Very good article. Sometimes we get sidetracked by the pictures or the slogans and neglect to actually look at the ingredients to see what is really in our products and how healthy they are.

Whattabout those Hidden Valley Ranch commercials where they show children begging for vegetables slathered in ranch dressing? Or the California happy cow spots? Maybe the only trustworthy one is the one where they state their juice is never from imported oranges, and they own the farm in Florida…but I don’t drink orange juice.

I told an old friend that even if you ripen a store bought green tomato in your kitchen, it won’t taste the same as one grown locally, in season. The store bought ones are mass produced for transportability: no bruising, bright color when exposed to ethelyne gas, tasteless. The ones grown locally or at home are grown for size, great taste, and taste. That’s why there’s always sugar and/or corn syrup added to most canned tomato based sauces. The flavor isn’t there because they have to buy their mass produced tomatoes in bulk to can all that sauce at the factories.

Damn! I read this just as I was eating my Birds Eye Chicken Chargrills and cabbage thinking that I am eating a really healthy lunch… then I looked at the chicken and realised that, actually, it just doesn’t taste/look like any chicken breast that I’ve ever eaten… A whole lot of Googling later, I found that these Chargrills are made from reformed chicken that is bulked out with water and various other things! I feel like a right fool for falling for the packaging on the Chargrills. You get the impression that they really are just chicken breasts with a little marinade on them – NOPE! Grrr, annoyingly I bought them because I thought they would be healthy, easy to make for lunch, easy to store in the freezer and a bargain. Wrong – not at all a bargain when it comes to my health.