Q: Erika, thanks to your posts, I’ve accepted that I’m an emotional eater. I’ve stopped buying junk food and am getting my kids used to not having unhealthy snack food in the house. I just don’t know what to do about Halloween! The kids love costumes, trick or treating and CANDY!!!! and I love to dress up and have my front yard decorated for the occasion… but most of all, I love to eat the candy while I’m waiting for the kids to come by!! This is a major blind spot for me, and I don’t know what to do! Am I going to just ruin Halloween for my kids? 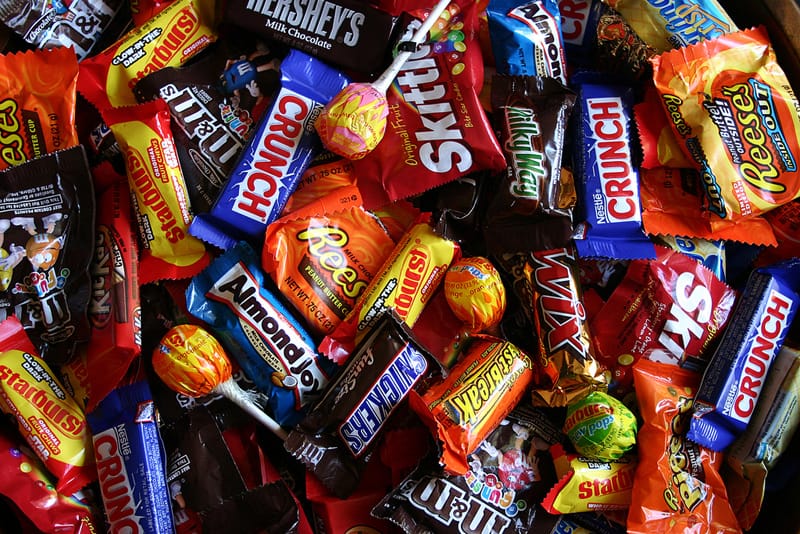 Halloween candy… the bane of my existence.

I hate “ghouls.” I hate “goblins.” I hate rude entitled teenagers who think I’m required to give them candy or they have the right to egg my house. I hate having to spend my money on an outfit that will only be worn once, and it’s actually considered a “sin” to wear it again! Y’all know I’m too cheap for all that.

Yes, I am the Scrooge of Halloween. I’ve accepted this about myself.

But, most of all, I hate the candy. It’s always the worst crap candy, because no one is spending big bucks on “quality” candy to give away, and anything else is discouraged. It’s actually frowned upon to give fruits or vegetables, lest the “razor blade in the apple” appear in your child’s trick-or-treating bag. You can’t give out baked goods, because you might be looked at as trying to poison someone’s child. No, there’s poison in those apple butter cookies… eat the crunch bar, instead. The irony.

People always say, “It’s just one day! It’s no big deal!” but to an emotional eater, “one day” can represent either a victory, or a setback (not a failure… language matters, here.) Sometimes, even, if you feel like the candy represents something that you are addicted to, you feel a sense of guilt for giving the stuff you won’t eat to kids, only to worry about whether or not they’re developing the same kind of candy addiction you might have. That might feel intense, or “too deep,” but for some that’s how it is.

The candy feels like a problem because you don’t want to eat it, and we all know that – despite everyone telling you to USE YOUR WILL POWER ROARRR!!!! – will power doesn’t magically appear out of nowhere, especially when you’ve never used it before. It’s not some magical part of your brain that you just have to tap into. It’s a muscle that starts out weak and, only through training and patience, grows stronger.

But who said you have to give out candy at all? If those little gumball machines can give out plastic spiders, fake rings and little decks of cards and keep kids happy for decades, then so can you. Hit up a local party supplies store – the same place, presumably, where you’re getting your home decorations – and pick up some bags of cheap toys and give those away instead. That way, you can still be festive and fun, but also avoid setting yourself back [and any accompanying guilt that goes along with giving what you won’t eat out to neighborhood children.]

Oh, and I can hear you now:

“Erika, but what do I do about the candy my kids bring home?”

I’ll tell you what I’ve always done with my daughter. Before Halloween approaches, I always scout out whatever little toy I know she’s been eyeballing, and I keep talking it up to her. “You’d really love that giant stuffed Uniqua, wouldn’t you? I knoooow you’ve wanted that Tag Reader, right? It looks awesome, doesn’t it?”

Once she gets back from trick-or-treating, I let her get one piece of candy – her “favorite” piece – and as she’s unwrapping it, I whip out the toy: “I’ll let you have it, but you’ve got to give up all the Halloween candy.” If I’ve played my cards right and picked the right toy, she hands it over easily. If not, and she tries to keep it, all it takes is a little “Awww, well, Uniqua will be so sad that she has to go back to the store. All lonely, with no friend to call her own.” and she’s sold. If you didn’t get a toy in advance, you can always post-negotiate. I feel like you should be able to reason with a teenaged kid, and tell them straight up – “You know Mommy is trying to kick this food addiction I have, and having that candy in the house isn’t helping. Let’s make a trade – I’ll buy you something nice if you agree to toss the candy out.”- and, hopefully, your kid won’t be a jerk. (Hey, I’m being honest. I love my little one, but she’s a jerk sometimes, too.)

It’s totally okay to want to be festive and fun [while spooking some kids out a bit, too] but you have to be just as accommodating of yourself and your needs as you want to be of others. Don’t we deserve at least that much?

Now, pardon me, but I’ve got to go figure out how to turn my ‘fro green so that my “head of broccoli” costume will be complete.

Awesome post as usual! I roast pumpkin seeds and eat those so I’m not tempted by the candy I bought for trick or treaters. I don’t buy too much but whatever doesn’t get handed out goes away and only comes out in the candy dish at parties during November and December for guests.

Yesterday I passed out candy and had some left over…the reeses bage was literally talking to me! Thank you for this post! I was literally thinking about what you would do LOL! It took everything thing in me not to jus eat one, because I know that one will turn into two and by the end of the week, the entire bag!….Any advice on how to keep motivated for people who have not started to see results yet?

I had the wrong email at first! Thank you for your response!!! I just found your site this week and I cant get enough of it! You are an inspiration! The weight loss journey is by far the most difficult thing and you cant hide when you give up…There are sooo many questions and what should I eat, what should I do? Honestly thank you for the knowledge that you are sharing. You are helping so many people!