I just… I can’t stop laughing:

First lady Michelle Obama’s new drive to get Americans to drink more water may seem unlikely to make waves, but it spills into areas that have stirred intense controversy among scientists, public health campaigners and environmentalists. 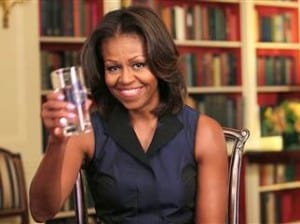 Launching the latest part of her Let’s Move initiative Thursday, the first lady declared that increasing water consumption will improve the health of kids and adults alike. She promised an intense media campaign that will include TV spots, as well as Web ads and social media postings encouraging Americans to “#drinkH2O.”[source]

This is fantastic news, right? Let’s throw our energies behind something we all should have access to, like drinking water, right? I mean, water even has health benefits!

“I’ve come to realize that if we were going to take just one step to make ourselves and our families healthier, probably the single best thing we could do is to simply drink more water. It’s as simple as that,” Obama said during a kick-off event at a high school in the aptly-named Watertown, Wis. “Drink just one more glass of water a day and you can make a real difference for your health, for your energy and the way that you feel.”

“Water is the first and best energy drink,” she told a crowd at a water festival outside the school. “I drink a ton of water.”

”The science and evidence about hydration and drinking water … abound, starting from headaches, but it leads to many more conditions,” White House assistant chef and Let’s Move director Sam Kass told reporters in a conference call Wednesday, citing obesity as one of the ills that could be reduced through more water consumption. “We do have a quarter of kids who drink no water under the age of 19. And over 40 percent of Americans aren’t even drinking half the water we know is recommended for optimum health.” [source]

This should be a no-brainer, right? Hold on there, buddy:

However, several public health experts contacted by POLITICO said they had concerns about the way the White House was framing the campaign. Those experts said the health benefits of increased water consumption are murky and there are no widely accepted criteria for how much water individuals should drink each day.

“There really isn’t data to support this,” said Dr. Stanley Goldfarb of the University of Pennsylvania. “I think, unfortunately, frankly, they’re not basing this on really hard science. It’s not a very scientific approach they’ve taken. … To make it a major public health effort, I think I would say it’s bizarre.”

”The idea drinking water increases energy, the word I’ve used to describe it is: quixotic,” he said. “We’re designed to drink when we’re thirsty. … There’s no need to have more than that.” [source]

Oh, but wait. There’s also the realm of the absurd: 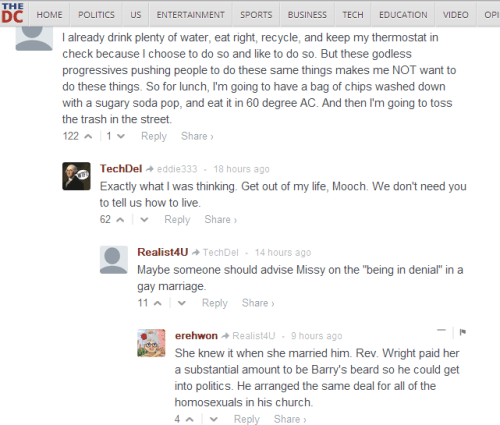 screen shot of the comments on the Daily Caller report on the initiative, credit: forwardprogressives

How hard is it to say “We have yet to find conclusive evidence on water being an energy drink/headache reliever?” Why do we have to denigrate the campaign, challenge its credibility, and basically be jerks about it? “Quixotic?” Unrealistic? It’s unrealistic that dehydration slows the body down, thereby implying that water could positively affect that? Come on, man.

I wrote about the benefits of drinking water before:

What benefits does water have to offer you?

And these aren’t little glasses, here. We’re talking big gulp status. I’ve got a 32oz cup sitting beside me right as I type this.

Water flushes your digestive system. As often as we talk about the importance of fiber, here… water is the second half of that equation. Water travels through the digestive tract and helps carry the fibrous materials through, aiding in the collection and expulsion of waste. In other words, if you want to poop regularly and often, you’ve got to drink water as well as eat your fibrous foods.

Water clears your skin. I look younger than I did in high school, mainly because of the amount of water I drink and how it flushes my skin. With the incorporation of more water into my daily habits, I rarely – if ever – experience skin problems on either my face or the rest of my body. Blemishes started to clear up and fade. I mean, it flushes out any toxins. That’s clearly going to help your skin.

Water can aid in curing headaches. Most of my headaches come from the fact that I haven’t stayed on top of my water drinking, and they almost always fade after I’ve downed a nice tall glass.

Now, there are tons of posts on the Internet that talk about how “the benefits of water are overblown,” and some of them are. Reading about how “water is linked with a reduction in cancer occurrences” doesn’t sound like a benefit of drinking water – it sounds more like a benefit of drinking less of something else. It’s also uncertain where the average recommendation comes from in regards to how much water one should drink. Some people shoot for a gallon, some people use the “ounces in half your weight” method and some shoot for 8 8oz glasses. I know that I drink a lot, but a lot is required to receive the benefits that I’ve shared, here.

…but the fact that all it takes is for the First Lady to suggest it for all of these scumbags to jump at the chance to down a big gulp (and crack wise about her being in a gay marriage, because what hurts more than that, rite?)… I’m sayin’.

Sound Off: “A Size 0 is Nothing to Be Proud Of For a Black Woman”

I can’t even. I’m not sure where to begin. I wonder if the people in the comment section railing against drinking water went around saying, “Don’t tell me to read books! Matter of fact, I’m gonna rip out pages of a book today!” when Laura Bush had her reading campaign push? The absolute knee-jerk vitriolic reaction to anything proposed by FLOTUS is downright scary.

Classic example of cutting off your nose to spite your face. “I was already eating healthy but because she wants everybody to do it, now I’m not going to!” Yeah okay buddy. #sipswater

Perhaps if FLOTUS spoke out in favor of oxygen Teabaggers and their ilk will stop consuming that in protest and lower the levels of noise pollution.

What jerks. Perhaps the First Lady should suggest that we all breath regularly, maybe those Rethuglicans will all hold their collective breaths until…poof, no more Rethuglicans!

Ugh typical spiteful people, they don’t like the person so they have to slam the ideas, whatever! I agree with water clearing out your skin. My friends have noticed my skin has started to glow since I have given up soda and started drinking a ton of water.

This makes my head hurt a bit O_O. Why weren’t they all up in arms when other people have said the same dang thing? *jeez* She didn’t say force feed your family hard liquor. All she said was drink more water. That is not a bad thing at all. i mean….I would be worried if my doc said “water is healthy for you? Who told you that myth!?” hmm seems to me they just wanted “something” negative to say. Personally I am glad she is speaking out on the health matters of people. I don’t really remember other first ladies doing much of that before.

Okay, so even if benefits of water are inconclusive. What about the simple fact that by increasing water intake, you are decreasing the amount of other stuff that is not good for you – juices and sodas which has unnecssary calories, and can put you an increased risk for diabetes, obesity, and other health issues? Even if increased water consumption just helps keep you from eating other crap, isn’t that a major benefit?

Wow. Oh well, what surprises me is the fact that Sarah Palin hasn’t come out and started handing 3 liters of soda to young children telling them to “Drink it up! A ‘little’ soda never hurt anyone! How dare she attack of rights to drink processed, sugary, acid organ eroding, carbonated drinks!” LOL

I agree with the other commenters and I’d add that it’s especially frightening to have a kidney specialist downplaying the importance of drinking water.

A kidney specialist that has a problem with people being told to drink more water? Either he’s in the twilight zone for real or he’s trying to keep people’s kidney’s bad to pay for that new boat or Benz he just bought. Or maybe the hatred is just that real. I just don’t get folks sometimes. Ridiculous.