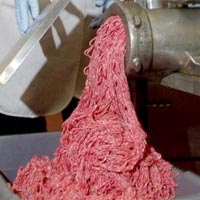 Last Friday, I decided to do the blog-in for Trayvon Martin, so I decided to scrap my Friday 5 post…until now. So, yes, I’m serving you Friday 5 on a Thursday. Don’t hold it against me, but yes. I know my days of the week.

I’m sure you’ve heard at least a teensy weeny bit about it by now (yes, that’s me, writing for Ebony), but it’s an important issue for you beef eaters out there.

What am I referring to? The nebulous “pink slime,” of course. Here, listed for you, are five important tidbits you need to understand about pink slime, your beef, and what you need to do in order to avoid it.

According to ABC News:

The “pink slime” is made by gathering waste trimmings, simmering them at low heat so the fat separates easily from the muscle, and spinning the trimmings using a centrifuge to complete the separation. Next, the mixture is sent through pipes where it is sprayed with ammonia gas to kill bacteria. The process is completed by packaging the meat into bricks. Then, it is frozen and shipped to grocery stores and meat packers, where it is added to most ground beef.

Lovingly referred to as either “lean finely textured beef” or “boneless lean beef trimmings,” the pink slime originated as a solution to the problem of ground beef being overrun with bacteria. The “benefit,” if you will, that the slime provided was that it was pumped with enough ammonia that it was capable of sterilizing the ground beef, thus effectively eliminating the bacteria “to the same degree as if you cooked the product.”

If you’re wondering how and/or why beef is overrun with bacteria… let’s just say it’s due to a problematic system of raising, slaughtering and storing cow meat, and instead of fixing that system, the producers of beef would rather add unnecessary steps to the process.

2. Pink slime is harmful because it was trusted to do something it was wholly incapable of accomplishing. As of 2010 – the most current data available to the public – 29% of all ground beef samples collected at the time of examination carried antibiotic-resistant strains of Salmonella. A glimpse of this chart, provided by Wired, will actually show that the number of drug-resistant bacteria is increasing in ground beef.

Why? Because, apparently, the manufacturer of “pink slime” has been decreasing the amount of ammonia used in the product.

Why would they do that, Erika?

They’d do that because they were receiving complaints about the taste. It’s also worth noting that, between 2005 and 2009, the pink slime alone tested positive for Salmonella at a rate four times higher than the meat it was intended to sterilize. This is important because, upon its founding, Beef Products, Inc commissioned a study that “showed” that the ammonia process would kill both E.coli and Salmonella. This study was so convincing, that when the USDA began testing meat for bacteria, they excluded the product that came from Beef Products.

3. If you’re a beef eater, there’s a 99.2% chance that you’ve already eaten pink slime… at least once… and no, no one had to tell you. The USDA considered the ammoniating of beef to be a “process,” not an “ingredient,” therefore it doesn’t have to be listed on any label and you don’t have to worry your pretty little head about it. So, virtually every fast food burger you’ve eaten since, maybe, 2001? Pink slime. Taco? Pink slime. How young are you? Eaten from a school cafeteria? Pink slime. Bought beef from a grocery store? 70% of that was found to include pink slime. The company who provides the slime was featured in the documentary, Food, Inc. with one of their representatives proudly proclaiming “I suspect we’ll be in 100% of it all in five years.” Indeed.

(It is worth noting that McDonald’s opted out of using the pink slime in their burgers earlier this year. If Mickey D’s decided to cut it, then…)

4. It’s highly likely that your child’s school – or the school of that adorable little child you know and love – is serving up pink slime, and probably will continue to do so without serious leg work. USA Today reported that the USDA said that schools can opt out of receiving beef treated with pink slime, but not without attempting to assuage the worries of a frustrated public. Implying that “pink slime” is “safe, nutritious and affordable,” all of which are clearly inaccurate, the USDA said it intends to adjust its policies to allow schools to order products without the gunk.

…but not so fast.

If nothing else is obvious, here, it should be that the reason pink slime is continuously being used, despite its poor performance in sterilizing meat, is because it is a cheap filler. The manufacturers found a way to turn the scraps left over from the valuable parts of the cow into something profitable, but since it’s still not as valuable as the actual muscle tissue that people normally eat, it doubles as a cheap way to stretch the meat. If schools opt out of using pink slime, I have every reason to believe their cost will increase. As we’ve discussed here before, very few schools can afford the lunch program they’ve got now, let alone an additional cost.

There’s also the fact that the USDA is only responsible for about 20% of the market share of ground beef that goes out to schools. There’s still another 80% of meat out there that needs to be discussed. And, while that’s a rather hairy situation, it gets worse: schools sign contracts for the entire year for their supplies of food, so even if they were to want to change, it’s a crap shoot as to whether they’d be able to swap out the slime.

5. You don’t necessarily have to give up beef to avoid pink slime and its problems. You can, for example, purchase a KitchenAid blender and, with the grinder attachment, grind your own ground beef. You can also become BFFs with your local butcher, if you are so privileged as to have one, and see if he or she will grind your beef for you. You can also go up to the counter of your favorite grocery store and talk to the butcher there about the ground beef they keep behind the counter, and see if you trust the answer you get.

I’ve even got a bonus for you:

Helena Bottemiller of Food Safety News dug up this United Stated Department of Agriculture (USDA) document [PDF], which lists dozens of chemicals that processors can apply to meat without any labeling requirement. Things like calcium hypochlorite (also used to bleach cotton and clean swimming pools), hypobromous acid (also used as a germicide in hot tubs), DBDMH (or 1,3-dibromo-5,5-dimethylhydantoin, which is also used in water treatment), and chlorine dioxide (also used to bleach wood pulp), to name just a few.

All these chemicals can go on meat. Not that you’d know it, because both the industry and the USDA keep it on the down-low. In fact, they work together on this. The USDA requires processors to label certain approved antimicrobials, such as salt, spices, and even lemon as ingredients, but not their hard-to-pronounce brethren. Why not? Perhaps because it might shock and disgust consumers to know how thoroughly their meat must be chemically disinfected before it can be sold. USDA’s head of food safety Elizabeth Hagen told Bottemiller recently that, “Just being honest, I don’t think your average consumer probably knows a lot about how food is produced.” She’s right. We don’t know the half of it — and the more we find out, the angrier many of us get.

In short, they took meat that was too dangerous to feed to humans, disinfected it so thoroughly that a block of the stuff will make your eyes water, and then celebrated the fact that they’d created a two-fer (it’s a food! it’s a disinfectant!). They embraced their creation so completely that around 70 percent of all supermarket ground beef now contains the stuff. By industry standards, it is nothing short of a food “intervention” success story.

Now, you may see why I originally said I’d prefer someone eat the muscle from the foot of a pig – virtually no fat there! – than eat cheap beef. Ammonia, connective tissue, salmonella, E.coli… surely, this is what you wanted with your pickles and ketchup on your burger, right?

Tilapia with Tomato and Artichoke Sauce

Save Calories AND Money: Make Your Own Jams and Jellies

I don’t eat ground beef due to a textural aversion I’ve had since I was a child. After all these years of apologizing about it and awkwardly trying to explain that no, it’s not your cooking and I’m not allergic or a vegetarian but I still can’t eat your hamburgers/chili/lasagna without gagging, I am finally thankful that I’ve never touched the stuff. GROSS.

this is so disgusting “Pink Slime” really??? Whoever thought of this plan should be locked under the jail for crimes against humanity.

Wow…very eye opening…thanks for sharing and keep it coming! I’ll eat ground beef as soon as I get back from whole foods!

Erika, have you checked into the deal about “meat glue”? It’s a substance that some meat companies use to bind together leftover cuts of meat so that the finished product looks like a well marbled boneless roast. The kind you might see tied up with string…

I have one friend who was going bonkers over whether or not he should eat meat ever again in life and I told him to buy meat on the bone. No more fillets, or boneless cuts. That includes ground meat. He told me he didn’t know how to cook nor cut up meat that was not filleted or in large chunks. So I guess I gotta give a few cooking lessons… But why are people shocked about this? Like thinking that chicken nuggets were real chicken? Or not noticing that ground beef from a tube tastes a LOT different than a chuck roast? Are we that removed from real food?

It took me a few weeks to get around to reading this because I kinda felt like it was gonna read just like it did.
Ugh.

Great article about Pink Slime. You covered everything… From what it’s made of to how it’s made and packaged.

thank you….heard this from my teacher today and so I googled then explained to my family why we will not be eating beef anymore!