First Lady Obama stole my heart back in 2009 when I got my first glimpse of the guns. 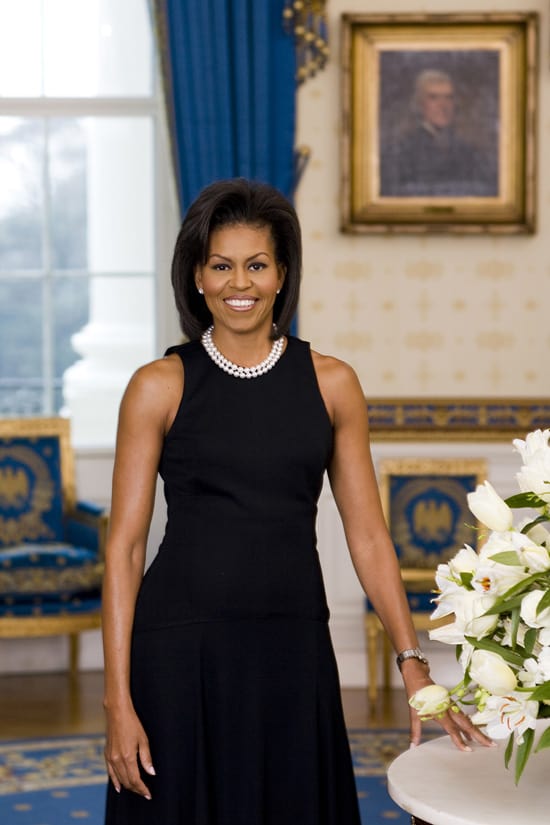 The official portrait from the first Obama administration.

In fact, according to David Axelrod, they were [lovingly] referred to as”thunder” and “lightning:”

Let’s face it: The only bracing symbol of American strength right now is the image of Michelle Obama’s sculpted biceps. Her husband urges bold action, but it is Michelle who looks as though she could easily wind up and punch out Rush Limbaugh, Bernie Madoff and all the corporate creeps who ripped off America.

In the taxi, when I asked David Brooks about her amazing arms, he indicated it was time for her to cover up. “She’s made her point,” he said. “Now she should put away Thunder and Lightning.”

I’d seen the plaint echoed elsewhere. “Someone should tell Michelle to mix up her wardrobe and cover up from time to time,” Sandra McElwaine wrote last week on The Daily Beast.

Washington is a place where people have always been suspect of style and overt sexuality. Too much preening signals that you’re not up late studying cap-and-trade agreements.

David was not smitten by the V-neck, sleeveless eggplant dress Michelle wore at her husband’s address to Congress — the one that caused one Republican congressman to whisper to another, “Babe.”

He said the policy crowd here would consider the dress ostentatious. “Washington is sensually avoidant. The wonks here like brains. She should not be known for her physical presence, for one body part.” David brought up the Obamas’ obsession with their workouts. “Sometimes I think half the reason Obama ran for president is so Michelle would have a platform to show off her biceps.” [source]

And actually, now that I think about it, there was much ink spilled about our First Lady’s biceps over the course of President Obama’s first term:

Her curvy biceps have become something of a lightning rod for remarks from both sexes in a larger discussion of how much female muscle constitutes too much. While some praise Obama as a role model in a world gone obese, others say she’s gone too far in displaying the fruit of her workouts. Read one online forum comment: “There is nothing uglier than manly, muscular arms on a woman. Mrs. Obama should be hiding them instead of showing them off.”

Even more vitriolic comments have been aimed at Madonna, whose über-ripped physique is a perennial favorite subject for photographers (the British press reported that her copious hours in the gym factored into the performer’s divorce). “Madonna’s arms defy logic, actually get grosser,” reads one Web headline accompanying a picture of the singer, sleeveless, revealing her sculpted physique.

Why do we care so much? The issue speaks volumes about how men and women view the parameters of femininity and strength.

“In some ways it’s kind of an old, tired way of thinking about women and power and boundary policing — when you can display that power and when you can’t, or when it’s appropriate,” says Sarah Banet-Weiser, an associate professor at the USC Annenberg School for Communication.

The idea of how much muscle is too much is entirely subjective, and people often have a visceral reaction to what they do or don’t like. In the Obama-Madonna equation, it’s not surprising that few are in the Madonna camp, considering her well-defined build and low body fat, coupled with her age — few 50-year-old women look like that.

Says personal trainer Ramona Braganza, a member of Gold’s Gym Fitness Institute, “She’s burning so many calories constantly and her metabolism’s sky-high. I’m not being hard on how she looks, but sometimes it’s nice to have a little body fat as you get older. It’s just healthier looking, and people almost look younger when they do that.”

And though strong legs and a flat belly are often interpreted as sexy features on a woman, bulging biceps . . . not so much. “It crosses the boundary from having sexy, toned arms to having arms that display, ‘Hey, I’m working on being strong.’ ” Banet-Weiser says. “The evidence of that work . . . is quite threatening.” [source]

I imagine that all of this criticism of her fabulously-toned arms is what I have to blame for THIS: 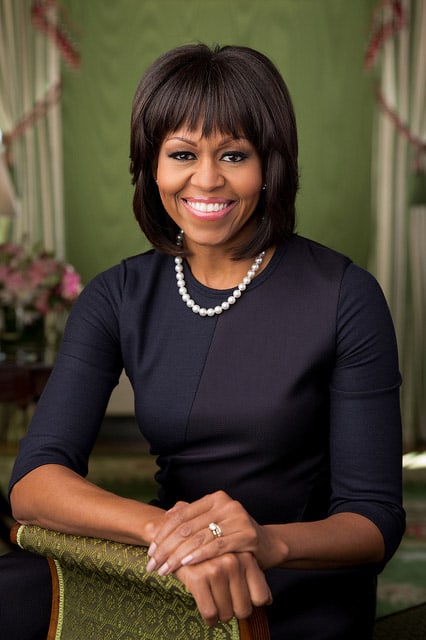 The official portrait from the second Obama administration.

Do I believe that there is someone or something to blame for First Lady Obama’s drastically different portrait?*

Aside from the fact that I hate idiotic, body-shaming, gender-limitation-imposing “trainers” and they will never stop catching me off guard, I’m not surprised by the criticism. Women’s bodies are not their own to decide what is best for them. Of course she needed to cover up. We don’t need our women looking like men.

*I also acknowledge that the difference could, very easily, be more reflective of the fact that our First Lady is gracefully aging, and might’ve simply grown more to like dressing this way and thought it more reflective of who she is today than anything else. And, because I acknowledge that, there’s no real petition other than more disappointed people whining in my comments section with me….I just wanted to publicly register my case of the sads. Pardon me while I go pout some more.

I love, love, LOVE Michelle. I love that she shows us you can be smart, sophisticated, AND sculpted.

Maybe she just wanted that dress. She wore a sleeveless dress at the State of the Union. http://www.usmagazine.com/uploads/assets/articles/60170-michelle-obamas-state-of-the-union-dress-all-the-details/1360761818_michelle-obama-zoom.jpg

I don’t know if she put them away altogether…those sleeves are hugging her arms pretty tight. But….yeah….I want to see the full on display.

I kind of think this is just what she wanted to wear at the time. I mean even if you have your favorite “asset” that you like to “accent”, there are times you like an outfit that is cute but doesn’t show off your “assets”.

I had no idea (although I’m not surprised) that her arms had sparked so much conversation in the media.(I live under a rock without much access to media.) It frustrates me to no end that so many people think they have a say on how our (womens) bodies should look. The parameters of beauty are so narrow and change like the wind. I hold onto hope that one day our culture will embrace all faces of beauty but I fear that hope hope is a chasing after the wind…

I was sad to see the guns put away as well, but she is free to do as she likes. And I think that some people will never be satisfied and feel that they have to complain about something. Still don’t know why those Congressmen were talking so much about her backside. Says more about them than about her.

this is appalling. women’s bodies are constantly policed. they cannot and should not ever appear to be too strong, lest they come off as unfeminine and intimidating. now there are a lot of other factors that could have contributed to the first lady changing her look for the second picture, but the comments about her arms are still ridiculous.

Sorry E, I can’t co-sign with you this time. I am the same age as the First Lady and almost as fit (lol). When you get to be 40+ and you have taken care of yourself internally and externally, it shows. You don’t always have to flaunt it. Trust, everyone knows that you’re grown and sexy. You’ll see what I’m talking about in 20 years or so :). PS – Thunder & Lightning will make themselves seen again, believe it.

Meant to say grown and fit. You can be sexy at any size.

I am taking this personally.*

*This is all – the post and the comments – tongue in cheek, btw.

Hate these stupid bullshit stories, if it were “manly” to have developed muscles and be strong, women’s bodies would be physically incapable of developing them simply by the virtue of being female and not male.
All this comes down to is that men are scared shitless of being perceived as equal to women in any way and insist on socially constructing as many differences between men and women as possible, reinforcing them through social pressure and public punishment and using them as a proof of their superiority.
And then comes along a woman who refuses to bend down and it turns out we are not so different after all. And if we are not so different they have nothing left to build themselves up with anymore. That’s what this censoring is all about, it has nothing to do with them being “concerned” with women “losing their” “femininity” and shit.

Wow. Michelle’s arms are not so cut that she looks manly. I’m not sure how anyone can look at her arms and come to that conclusion. Her arms are defined, yes, but definitely still very feminine.
With that said, I am a woman who prefers soft lines over…. lets say, Angela Bassett’s guns on “What’s Love Got To Do With It.” My eyes didn’t see anything feminine about those arms. (Although Ms. Bassett herself is the epitome of femininity in my book). BUT that is my own opinion and I’m certainly not gonna knock any of my sisters out there who’s goal is to body build to that extent. It’s just not for me.