I’m going to tell you a story I should be embarrassed to tell, but hey. No…shame…zone.

Once upon a time, all I wanted was to be skinny. “Skinny enough to fit into a Bebe dress!” is what I think my original tag line was. All I wanted was to be a “smaller version of myself” – softer, smaller, curvier. I didn’t know much about the game, all I knew was what I wanted the score to be at the end.

One day, one of my dear male friends who’d been training for years like his life depended on it (and, when you once served in the military, it’s safe to say you never lose the feeling that your life depends on it), asked me if I’d ever considered strength training.

I sent him a pretty succinct response: “Nah – I’m not trying to look like you. No shade.” 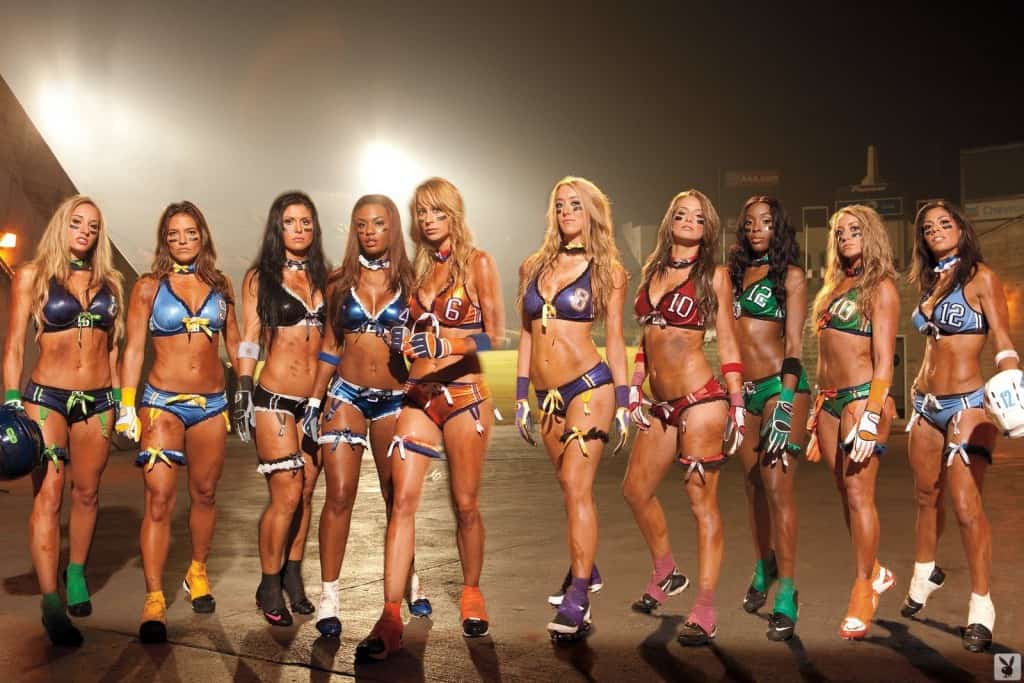 He laughed long and hard, and sent me a photo of some of the women from the Lingerie Football League, and asked me if I thought they looked like him.

I frowned up my face a bit. “Um…sort of. There’s too much definition… too many lines everywhere.”

Again, I was laughed at for a while. He then sent me a photo akin to what we could refer to as She-Hulk, because she’s literally built like The Hulk, but in a bikini.*

Finally, I could do some laughing.

He then spent a little time telling me everything I’m about to tell you, everything it took me years of training and research to fully understand – that strength training cannot and will not naturally bulk a woman up to She-Hulk status. It can’t.

No, you’re not going to go into the gym, lift a few fifteens, go home, and then wake up looking like Macho Man Randy Savage. And here are five reasons why.

1) Muscle building takes years of dedicated training. People talk a lot about how they’ve put on “10 pounds of pure muscle in one month” – I’m looking at you, Alcide – but the reality is, this is virtually impossible. Neophyte weightlifters – because, let’s face it, that’s what you are, sis…a weightlifter – can experience an early boost in ability to build muscle, but I’ve never seen a number [reported in data that I respect] higher than 5lbs in a 30-day period. After that initial boost period, you’re very lucky if you can manage to seriously build 2 pounds a month of pure muscle, and – even then – that requires dedicated, consistent training and top notch nutrition… all things exceedingly difficult to achieve in the lifestyle of the average woman, American or otherwise.

2) Here’s a little secret about the weightlifting industry that no one tells you: a vast percentage of the people you see ‘hulked’ out of their gourd? Are on something. There are entire message boards dedicated to teaching newcomers how to safely use steroids to achieve the look they’re after – this is mainly why there are bodybuilding competitions that drug-test prior to entry (and, for that matter, there are competitions that do not drug test.) You know how I said that the average natural bodybuilder takes years to build all the muscle necessary to get to that level? Well, steroids help cut that time down considerably. Think of the number of athletes we’ve heard of over the years being busted for using steroids to boost their performance – the performance boost comes from skipping years of training merely to cut right to having the power and strength that comes with added muscle.

Some of the bodybuilding greats got so great because they started scrawny or chubby just like anyone else. And now, years – in some cases, decades – later, they’ve earned not only the right to be called “the greats,” but they’ve also earned the right to compete against one another and win those hard earned trophies and cash prizes.

So no, a large number of the people you do see, didn’t even achieve their physiques naturally. Male or female. And this isn’t an accusation – this is a reminder that you never know what’s going on behind closed doors, so don’t let someone else’s physique influence you in any way.

3) Anatomically and endochrinologically speaking, females literally don’t make enough testosterone on their own to facilitate the amount of muscle growth necessary for a woman to “bulk up.” Naturally, biologically-born females make less than one tenth the level of testosterone found in a biologically-born male with comparable height, weight, and body fat statistics. This isn’t enough to get you even remotely close to where males can naturally build.

Testosterone is a key part of muscle development, but also just a key part of human function, as well. Your sex drive, your potential for developing acne, the regularity of your menstrual cycle, and even your ability to conceive and nurse are all affected by the amount of testosterone in your body. When it comes to the actual process of muscle development, testosterone aids with the repair and restructuring of muscle fibers that are affected in training through an enhanced ability to process protein. The less of this you have, the more difficult it is for you to build. Hence, no, female-type people, you won’t be able to do it.

4) You actually can control how much muscle you build on your body. There’s a massive difference between lifting to gain, and lifting to maintain. You change the number of reps, you change the number of sets, you change the frequency of the training, you change the amount of weight you use, and you change the amount of different exercises you do. And that’s not even all of the variables you can change when it comes to your workout. Everything from how fast you do your reps to how often you do them contributes to muscle growth, and are all infinitely adjustable to your desires (or with the consult and support of a specialist.) Once you’ve achieved your muscle training goal, you start to reduce the amount of training you do in one way or another, and slowly shift your training into maintenance mode and growth slows down enough to merely serve as maintenance instead of development. (And, by then, you very may well shift and decide to shoot for more, like I did.)

5) Considering all of these things, I have a personal theory about this kind of stuff. Discouraging women from strength training is not rooted in anatomy or even health, it’s rooted in sexism (and patriarchy, but I’m sleep, though.) Even among male bodybuilders, there’s a double standard when it comes to “women and how women are supposed to look,” even though this is the space you’d expect the most support and encouragement when it comes to the work of body building. The myth of women who strength train “looking like men,” in my mind, is intended to discourage women from doing the thing that makes most men embarrassed about their own lack of fitness. No woman can make you feel bad about not having a six-pack if she doesn’t have one herself; but if he undresses you and sees one, he feels an implicit shame.

There’s nothing worse than being with a person so insecure that they start to feel like you’re too good for them and, as you become leaner, healthier, and stronger – ostensibly, more like what society deems acceptable – you could easily make an insecure partner question themselves and why they’re with you. I’m sure I don’t need to tell you the kinds of desperate things partners do when their ego is brought into question. Keeping women as frail – not to be confused with lithe – as possible essentially requires the need for a man.

(As a happily married woman, I can tell you that healthy relationships stem from wanting your partner, not needing them. There’s a difference between support and dependency. This is all another post entirely.)

Women, over history, have always been discouraged from doing anything that wasn’t in servitude to someone else – especially black women – and we haven’t fully shifted away from this line of thinking. Your body is ultimately yours to plan a future for, to train with, and to determine the ultimate physical goals for… if you still want an ultimately soft physique, work for the physique that makes you happy. If you want to be rock solid hard body, work for the physique that makes you happy. If you’re still wholly uninterested in weight loss or weight training entirely, rock on. But, do me a favor: think long and hard about what you want, why, and whether it’s ultimately healthy for you. Balance what you want fairly against what you need, and if, in the end, you’re truly happy, then I’m happy for you too.

But I’ll be in the weight room when you’re ready to bang it out.

*This sounds disparaging, but it isn’t – for a lot of bodybuilders regardless of gender, hulk status is a compliment, often called “hulking” and generally not an insult, so the intention isn’t to offend; alas, to those I may have offended, I sincerely apologize.

5 Things I Learned From Practicing Yoga

When Woman Dies From Booty Injections in Salon, Salon PACKS UP AND LEAVES

In your newsletter you said you’d write more in-depth pieces on strength training and I’d like to learn more about everything you addressed in point #4 in this post. This was very helpful!

Absolutely! Anything specific you’re curious about that you’d like me to include? Let me know so I can make sure I get it in there!