I’m going to work to commit every Thursday evening to writing about self-care – what it is, how you can achieve it, and how we can become better together. As this series progresses, feel free to chime in with your thoughts, questions and concerns. Read part 1 here. View part 2. View part 3. View part 4. You are now viewing part 4. View part 5.

When I spoke at the Black Girls Run! conference in Charlotte in 2013, one of the women in the audience latched on to the fact that I identify myself as a “recovering emotional eater,” as opposed to a “former” one. I calmly, yet painfully, admitted that I’d never be fully past my former habit. I’d always know what this felt like, and in order to avoid succumbing to these habits again, I’d have to become an aggressive problem solver. I’d have to face all of my problems head on – if I could take steps towards solving or eradicating the problem, I’d do so; if I couldn’t do anything about it, I’d have to simply become comfortable with that truth. Most of all, I’d have to do so while always remembering that a failure to think critically about my actions would quickly result in backsliding.

And then, she asked me a question that I’d honestly never been asked before: “Yeah, but how do you do that? How do you solve the problem?”

Her question confused me, because I’d never thought critically about the how of stress reduction, and trying to answer it on the fly felt like I’d do it a grave disservice. I will try today, though.

I had to accept the fact that I needed to ask many more questions before I spoke decisively. So many times, we speak before we know all the details or make choices impulsively without thinking of all the things that could potentially go wrong. What’s more, sometimes we feel pressure from others to speak impulsively, failing to identify taking a moment to think as being “thoughtful,” instead calling it “indecisive.” More often than not, those people who want to force you to decide without thinking aren’t the ones whose reputation would be on the line. Those people aren’t the ones who’d be penalized by you acting without thinking. Most importantly, these aren’t the people who’d be plagued by the anxiety that comes from choosing poorly.

I had to give up the incessant need to stop micromanaging, especially when it came to dealing with other adults. They’re adults. If I’m a supervisor or authority and they need me, then they should be encouraged to come to me. Micro-managing means that’s less time spent on doing other things, like polishing whatever project or event we’re working on, or simply taking a few breaths. When I have an employee or subordinate who completely fails without being hand-held, I immediately know it’s time to reassess whether they’re currently serving in the right position. If you can’t handle the job without your boss micro-managing you – and really, who couldn’t? – then you should hold the position. Why should the boss have to suffer the anxiety while the employee coasts through?

I also had to realize that this related to parenting, as well. What parent wants to see their child hurt emotionally, injured, making mistakes we’ve already learned? That being said, so often we forget how we learned – experience. It’s oftentimes a better teacher than a parent could ever be. It’s different for every parent/child relationship and every environment, but if there’s one thing I’ve learned as someone who was once hyper-involved in her child’s school environment… it’s that regardless of what you say or do, the most learning will happen when you’re not around. You have to find a way to prepare your child for the world out there, both empowering them to make their own decisions (and make the right ones) and helping you feel less stressed about them.

Basically, I had to relinquish the need to control everything. Let go of the belief that perfection was the goal, as if everything runs perfectly when I control it, anyway. I had to accept the reality that things can go less than perfectly and still run well. It’s like throwing an exceptional party, with the attendees never realizing that only half of the initially planned menu of hors d’oeurves actually made it out the door. Little things that you stress over rarely make the big picture as fabulous as it truly is, so grasping at perfection and being overly anxious when you don’t get it isn’t necessary. 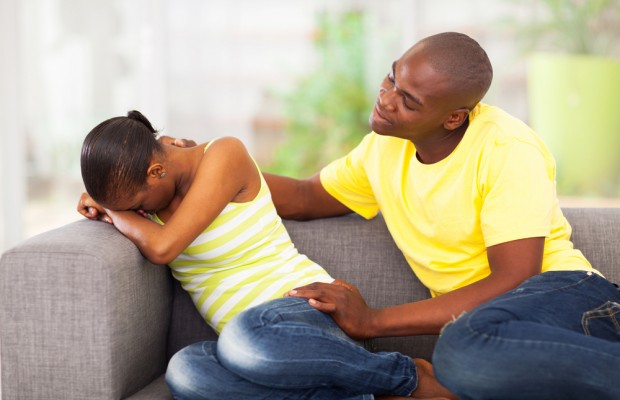 It’s okay to cry, and even let a trusted loved one comfort you while you let it all out.

You know what else I had to learn? I had to learn that, yes, it’s okay to cry. We grow up looking at crying as something that babies do, because they’re incapable of articulating what’s causing them grief. Somewhere along the line, we begin believing articulation comes with adulthood. Whew, did someone lie to us.

In those instances when I don’t know exactly what’s causing me sadness, I keep an arsenal of tears-inducers on hand. A good, heartfelt story is always helpful. A book, a movie, a long-form journalistic essay, whatever. A story that pulls tears out of you – right down to the ugly cry, sobbing, snotting up your t-shirt cry – will undoubtedly make you feel better, if for no other reason than the fact that you are a human being capable of understanding and compassion, and you can connect to and empathize with what’s happening in the story.

Sometimes, you just need that – the opportunity to cry, to feel sad. I’d once read somewhere the anger is merely the recognizable intense form of another emotion, and the intensity of that anger affects our ability to identify that emotion. I wonder if anxiety functions in the same way, an intense form of something else – frustration, disappointment, uncertainty – that we sometimes cannot identify. Sometimes, being able to tease out that cry – maybe alone, maybe with friends, maybe with your significant boo-thang – can help you relieve the pressure that the anxiety builds up.

Crying is merely a tool in the arsenal, but an essential one, no doubt. Many people aren’t comfortable with it – they believe it shows weakness, “youth,” inexperience. I actually think it’s the complete opposite – people who refuse to tune into their feelings (publicly or privately to themselves), people who are hell-bent on proving themselves to be as tough and hard as porcelain are oftentimes the ones most likely to shatter and break… or are, quite frankly, sociopaths.

But the complexity of our feelings and the newness or intensity that some of them bring shouldn’t be so debilitating that we can’t carry on our everyday lives, leaving us curled up in a ball shivering on the floor surrounded by cookie wrappers.

And, no feeling is more capable of doing exactly that… than grief.

Sound Off: Have You Ever Been ‘Fit-Shamed?’

I Finally Answer the Question, “What Do You...

Erika, I just stumbled on your page yesterday when I was doing research about adding strength training to my regimen. Thanks for having that information and sooooo much more. Your essays about emotional eating are ones I will keep in my own arsenal as I deal with my own habits. Thank you!