Home Social Construct Sound Off: Have You Ever Been ‘Fit-Shamed?’

Sound Off: Have You Ever Been ‘Fit-Shamed?’

Last week or so ago, @FemmePolitique asked me on twitter,

Yes & yes RT @FemmePolitique:i know you talk a lot about fat shaming..but is there such a thing as “fit-shaming”? Have you experienced that?

and I didn’t even have to think twice. Of course I have. In fact, it’s part of the reason why I write so much about fat-shaming.

When I was heavier, I believed that part of the shame I felt about my body would dissipate once I reached a certain size. That I wouldn’t feel that pressure to be something else anymore, that I’d finally be “okay” and “left alone.” 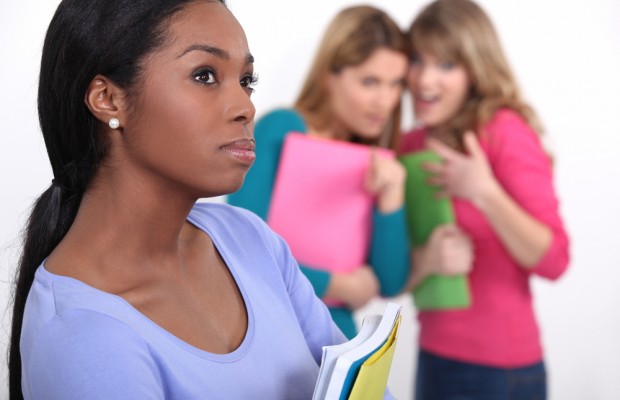 Boy, I couldn’t have been more wrong.

Every choice I made, every move I made, every ounce of food on my plate… for a while, someone was always asking me questions. Not in an inquisitive fashion, but in an accusatory way.

“Doesn’t that make you fat?”

“Don’t you worry about that going straight to your thighs?”

It took me a long time to realize that these people’s questions are less about me, and more about them. It’s so much more about them trying to challenge their own beliefs about how they can get healthier.

That’s why I want to hear from you – have you ever had someone challenge you on your efforts to get fit? What happened? What did they say to you? What did you say back? How did it make you feel? Sound off!

Yes! Along with constantly being challenged about my vegetarian lifestyle people constantly tell me I work out too much. It’s annoying and at this point most people know not to comment on what I eat and how much I work out. I actually like working it out, I know most people don’t but I like it. I love the constant challenge of pushing my body to lift more weight or run longer and harder.

I think I’ve been fit shamed, I think. I use ur website to figure out recipes and just to get inspiration for meals. I was approached by a coworker while I finished up my breakfast at work. I was eating fruit, I think it was an apple, Cantaloupe, and pineapple (my favorite fruit). My Co worker was like “wow that’s a lot of sugar to eat at one time, won’t that put on lbs”? I kindly said,” no, the body knows how to process the sugar in natural foods efficiently so it doesn’t make us fat. ” then I just walked away as she ate her hotcakes from mcdonalds or burger King or wherever the box said, bet they were processed to no end. People really need to do some research and trials before they try to eat healthy or lose weight or before they approach someone else eating….. Fruit! I’ve encouraged friends and family to do research or to even just take a look at ur site, they just don’t do it but claim they wana lose weight. Whatever, not my prob but very annoying and I just don’t get it. Still not sure if I was fit shamed….. Hhummm

I feel like once you’re working hard and results become apparent, people feel like their support affords them the right to comment and be a part of your “Show”. It’s like Interactive Fitness…”make sure you do this and that” and “if you’re going to eat that, make sure you do a couple of miles and work it off!”

It has been the world’s worst kept secret that I had VSG surgery and with my tool and hard work I have lost close to 100 pounds. You would think that some people had surgery right along with me. So much plate watching, like I don’t know what and how much I can eat. “Didn’t you just eat? Can you eat that? Are you allowed to eat that? You can’t eat that, can you? Are you working out again? My you’re getting thin… how much more weight are you going to lose?”

My response is always, “I know what I am doing. If it’s a mistake, it’s mine to make.” And then I have to just move on with my life. I tend to not be very specific about what I am doing. I don’t announce when I change my eating plan, I don’t declare my goals in five bullet point format. I share enough info to let folks know I WORKS FOR DIS, my weight just didn’t fall off… but I don’t talk much about what I eat and my philosophies because I don’t need the constant input from the Studio Audience.

I can really relate to this. When I first started working at my job there were several people who talked about wanting to get in shape. Dumb me suggested that they start taking the stairs “oh we only take the stairs in an emergency”. From that moment on the dynamics changed, the smaller I got the less friendly they got. I can count on one hand the times I was asked out to lunch with them. Oh well, I’ll eat my apples and drink my water lol

I’ve been fit-shamed, not much but it has happened. I once went out to dinner with a group of girlfriends and one of my good friend’s home girl came along. I ordered a salad and she goes, “Who orders a salad.” My response was a dry, “Me,” but she was just saying that she wanted to lose weight a few moments ago. A similar thing happened another time where I went out with friends and before we walked in a friend said, “Please don’t order a salad.” I actually didn’t want a salad that day but got one just to spite her. When I came back to the table with it she goes, “You’ve been on such a health kick lately.” It was more envious than observational. I just responded with, “I wouldn’t call it a health kick. I’m simply trying to adjust my lifestyle so that I feel better about the things that I eat. I’m not perfect but it’s fun finding a good balance, you should try it” (this was also a friend who said she wanted to lose weight). That was the end of that conversation.

YES! my plate has never been watched more than when I decided to live a healthy lifestyle and get fit. I often get the “are you allowed to eat that?” on the rare occasion that I eat something that’s not all the way healthy. or the “how many carbs are in that?”. WTH?! This is all coming from people that dont eat healthy EVER!

Just over 2 weeks ago, I finally decided to stop kidding myself about only “eating right” as a means to get fit…so I got off my butt and started a hill-walking routine. The hill near my house is brutally steep and even when driving up the hill you have to “put the pedal to the metal”. I had already crested the hill for 10 solid days (plus walking to total 1hr worth of deliberate exercise) , my plans where to make 1 trip on week 1 and 2 trips on the second week, etc.. Someone who is always giving me unsolicited health advice (they are always sending me emails and text messages, FB links about fitness, weight loss, exercise, etc.) made a comment, “So you started walking”. Me: Yes, the hill. Them: “Oh, you go over it several times, right?” Me: silence. From not exercising at all to getting off my butt and moving is motivation enough for me, but for some people, it is just not enough to please them. And what’s so funny is, even though this person is slim, she’s not healthy. She eats more junk food on a daily basis than I’ve eaten in 5 years. She has serious medical conditions and problems galore and I barely get a headache! I’m proud of my efforts and I won’t let this “fat/fit-shaming” stop me.

All the damn time. I started running a couple of years ago – I’m not a fast runner, but I like to run. When I began I would post some of my stats on Facebook because I was proud of what I’d accomplished. I wasn’t looking for accolades, but I wanted to share something that was important to me. What I did end up getting back were an array of passive-aggressive posts from “friends” with snark-e-cards talking about not caring about how far you ran today, or people telling me how terrible running is for your body and that I’m ruining my knees. Nevermind that those same people are posting photos of the 1,500 calorie dinner they ate last night, but it offends them when I discuss my running. I no longer share my running successes with the general population, or even with most of my friends. I save it for my fitness group and my parents and husband…which is sad.

So many times. Being a vegetarian almost always opens you up to the “are you getting enough protein” questions. Then there are people who want to tell you avocados are fattening or question my choice not to eat diet foods.

Then you get the gyms that want to try and hard sell you on personal training packages. Honestly if I could afford one I would but my membership is a splurge in and of itself and I picked a gym with a pool and regular workout classes specifically because I can’t afford a trainer, much less one that wants to promise me miracles.