Home Did You Know What Does “USDA Inspected” Mean On Your Poultry Label?

What Does “USDA Inspected” Mean On Your Poultry Label?

So… I admit that I have a strange habit. Whenever I’m in a new neighborhood, if I have the time, I’ll take a peek inside their grocery store to see what they’ve got going on in there. I mean, what can I say? If there’s something new in there that I can try, I’ll snatch it up. Besides, the grocery store will tell you a lot about an area: who the people are, what they like the most, how culturally diverse their food tastes are and what’s most important to them. My local grocery store carries traditionally Cuban, Argentinian and Peruvian foods… and a good chunk of it all is in Spanish. That tells you a lot about where I live.

That being said, I recently visited another area and – as expected – I crept off into their grocery. I didn’t find anything new, so to speak, but I did find something a little confusing: 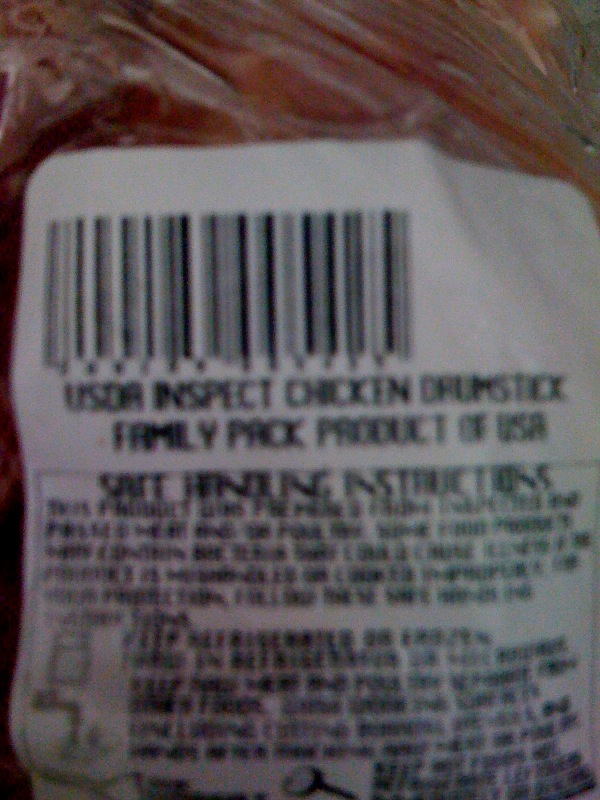 What the hell does “USDA Inspect” mean? You know me. I asked.

“It means that this meat, here? It was inspected by the USDA!”

I calmly snapped my photo, and off I went to double check what I thought I already knew.

That label was affixed to a 25-pack of chicken drumsticks sold for $5. And under any other circumstances, that might’ve seemed like a pretty good deal to me… but I needed to be sure on what it meant for meat to say “USDA Inspected” instead of “Grade A” or “Prime.”

Again, I was right. In an article written about Yum! Brands – the makers of Pizza Hut, Taco Bell and KFC – most recent brochure about the quality of their food, Melanie Warner wrote the following:

There are several worthwhile messages tucked into Yum Brands‘ (YUM) recent “Did You Know?” food quality brochure. For instance, the fast food giant — owner of Pizza Hut, Taco Bell and KFC — highlights the fact that KFC’s Kentucky Grilled Chicken Meal is only 415 calories and that the chain sells corn-on-the-cob, which is a good source of fiber and folic acid.And then there’s this on page 3: “We use only high quality USDA-inspected chicken in our restaurants.” Here, Yum is asking its customers to believe that the official-sounding term “USDA inspected,” which the company also trotted out in January in ads defending Taco Bell’s beef against a lawsuit, actually means something. It doesn’t.

There are several levels of absurdity here. Virtually all of the meat sold in the U.S. is USDA-inspected. Federal inspectors are required in slaughterhouses if the meat is being sold out of state, which is almost always the case. To market your chicken or beef as USDA-inspected is like boasting the potatoes for your fries were grown in dirt.

And having a USDA inspector glance at the meat that will become your fried chicken as it’s whizzing along a conveyor line (usually in carcass form) doesn’t mean it’s going to be free from deadly bacteria or other contaminants. The burger meat that paralyzed Stephanie Smith was USDA inspected, as was the salmonella-infected chicken that went into Marie Callender’s pot pies a few years ago.

This is not to say that federal meat inspectors are worthless. They’re charged with making sure that diseased animals don’t make it into the food supply and that meat processors are following their own food safety guidelines. But while an inspector can point out a cow with a big clump of poop still stuck to its hide, he or she can’t see E. coli or other harmful bacteria.

And for all their usefulness, there have been well-documented problems with the USDA’s meat inspection system. A Humane Society investigation in 2007 showed crippled cows being tormented and sent into the food supply at a Southern California slaughter plant, despite the fact that several inspectors were at the plant every day.

When looking at the USDA’s website for clarification, this is found:

Poultry
The USDA grades for poultry are A, B, and C.

So, is that what’s happened, here? Is the perception that “Grade B” and “Grade C” isn’t a better “marketing pitch” than “USDA Inspected?” Sneaky, sneaky. Don’t be fooled: this is code-language for “It’s sub-prime meat.

But look at the USDA’s definition of the non-grade A poultry: “used in further-processed products.” So even if it IS, in fact, the stuff used in food manufacturing and fast food, why is it being sold to the public at a grocery store?

My first instinct is to say that one should forego quantity for quality, but that’s a hard message to send out to people who may very well be more focused on quantity because they feel as though they can’t focus on anything else. I get that, but if you’re a person who is aiming to prioritize your health a little higher on the list, here’s a hard and fast realization that we don’t like to apply everywhere, but we must: the cheap solution isn’t always the best one, no matter what quantity it offers us, and its much better to learn how to use less of a better quality product in a more effective and efficient fashion.

When it comes to clean eating, we do what we can to emphasize quality of food, here, and the higher up the chain we can go, the better. If you’re going to eat meat, do what you can to get higher quality. Consider this a brief lesson in meat quality, and cutting through the BS to avoid being fooled into spending your money on something you thought was higher quality than it is. The phrase “USDA Inspected” doesn’t mean anything. Don’t believe the hype, and don’t buy into the bull.

200lb 3rd Grader Put In Foster Care Because Of His Weight

Okay- so what you’re saying is- if I see meat in the store, and ALL IT SAYS is ‘USDA inspected’ with no mention of it being Grade A, I should err on the side of caution and act like it’s Grade B and C.

You know, I predict at some point in time there is going to be a class action lawsuit towards the FDA for their crappy, dubious labeling.

This isn’t even the FDA – it’s the USDA. And since their original purpose was (and always has been) to protect the agriculture industry, we shouldn’t expect them to speak out against ANYTHING the agriculture industry is creating. Their sub-prime gradings? Yeah… those don’t even speak to WHY an item receives a sub-prim grading. They just tell us what kinds of items receive sub-prime grading. That’s how you know it’s hellasuspect. Sigh.

Wow! This post was extremely informative. I too am guilty of going into grocery stores in different neighborhoods to check out the produce and protein. I tend to shop all over the place based on what I’m looking for. It is interesting to learn what the words on the meat labels mean. I’m new to your blog, but I’m definitely coming back!

Love your site! Thanks for bringing this up – the more people we can get talking about he humane treatment of animals the better. Congratulations! 🙂 Kelly