“In China,” she said through a translator, “there is an old saying, that fairness covers one hundred faults.” 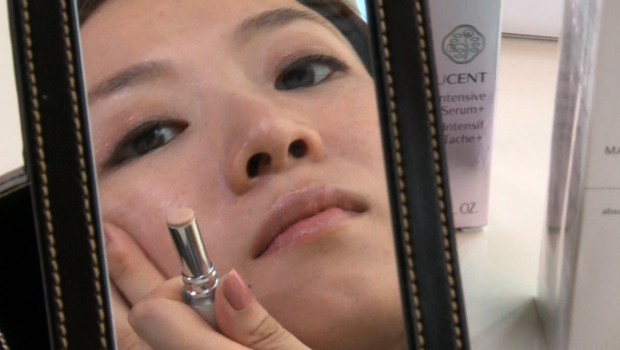 Then, a special diet of foods that she believes have skin-lightening abilities: Milk and Chinese yams. She said, “If you eat dark, like soy sauce, you will get dark.”

Also, she keeps well-hidden from the sun when she’s outside. “It shows that a woman takes good care of her skin, and more people will be jealous of her.”

[…] TV advertising is making sales of skin lightening products a $2 billion a year business in China, and still growing, in a country where a focus on beauty is one of the benefits of new-found wealth, and where many Chinese women think fairer skin makes it easier to get everything from a better job to a better boyfriend. And here’s the OLD part, going back, say some, to 700 BC, as depicted in the 2006 film “The Banquet” – a time when rich women at the Imperial court used ground-up pearls as a white face powder to give them that light complexion.

“Those who work outside, till the fields, of course tend to acquire a very dark complexion, whereas those inside – nobles, aristocracy – highly value white skin as a result, or lighter skin,” said Dikotter. “Women in Europe and North America tend to want to have a tan skin … whereas in China, what is wanted is very clear complexion.”

At a Chinese beach, one can see the anti-sun mask, a full head-and-neck no-tan system.

And for those with money to spend who want to take it a step further, there is another expensive fashion trend ready to help out. At the EverCare plastic surgery center in downtown Beijing, Dr. Chang Weiling shows off before-and-after pictures of saggy skin tightened, noses reshaped, and skin lightened with freckles gone, thanks to laser treatments and whitening injections.

“You know, no one would like to be called a ‘yellow-face woman,’ so you have to get rid of brown spots in order to maintain a fair color,” said Dr. Chang, through an interpreter.

Which brings us back to Aki. […] “For you, what color are you trying to achieve?” Petersen asked.

“My ideal is, of course, to have even, white, luminous and smooth silk, like the egg white of a boiled egg,” she replied. [source]

Okay… so, maybe one comment: doesn’t this all sound familiar?

I just…I guess this is what happens when we only allow for one idea of “beauty.” People are resigned to buying billions in products to chase after it.

For goodness sakes, how many white women have skin “like the egg white of a boiled egg?”

Someone help me out with this?

It goes back centuries like in the article said where if you were tan you were more then likely a low class worker when if you were very pale you had money to hire people to work for you and never had to go outside so you never got dark. It kind reminds me of the house slave and the field slave. It the reality of centuries of culture that view that if you have lighter complexion then you are wealthier, smarter, and more beautiful because hundreds of years ago that was actually true. You paid people to work for you so you had time to study and learn and also more time to yourself for your looks.

So many possible things to say…but I’ll just say that the world will be a better place when two things happens: 1. When women appreciate their natural beauty, whatever that looks like. 2. When women realize that they have more to offer the world than just beauty.

Not blaming those involved, but just saying: colorism is a system where no one is happy. I have very, very fair skin (albiet not the luminous, even white of an unboiled egg, lol) and I was teased mercilessly when I was in elementary/middle/high school… kids telling me to get a tan, that being pale made me look fat, and a lot of telling nicknames (‘bleach’ for example). Being ‘tanned’ as a white person in the northeast costs $$, so this form of colorism is just another way for the beauty industry to manipulate people into spending their dollars by promoting a hard to attain ideal. Asian ladies have to be pale, white ladies have to be dark, ladies in Africa have to be pale… whatever group you’re in, chances are the beauty ideal is whatever you’re NOT. In so many words, this is just me agreeing with Jan L. Your beauty doesn’t define your worth, only your worth to the fat cats at Revlon.

The egg reference made me laugh because just today a white male friend of mine told me that he was embarrassed to take his shirt off for the first time in front of his black girlfriend because he’s “white as an egg.” Grass is always greener….

Ugh. I went to India a couple of years back and I thought it would be a great place to get a decent foundation that would match my skin tone (I am ethnically Indian with your average brown Indian skin). Clearly this was a ridiculous thing to do because, get this, a shop assistant in a Mumbai department store told me they didn’t stock foundations in my colour. After standing there with my mouth hanging open, I told her that was the stupidest thing I had heard in a LOOOONG time and walked off.

Oh, and this made for verrry interesting viewing:
http://www.bbc.co.uk/pressoffice/pressreleases/stories/2009/05_may/01/white.shtml

Ahem, and don’t forget this completely and utterly mental thing… I’m almost embarrassed to even post it – mortified on behalf of all Indians everywhere.

She has some very deep inner issues. Deep and learned. I wonder what the long term effects of skin lightener is let me as Sammy Sosa 🙂

Articles like this are always so interesting, because it just reminds me of what I have actually come to know about the successful and the wealthy in my personal travels. Those wealthy ( not nouveau riche ) don’t care, they enjoy the comfort and relaxation of being themselves, why? Because they can afford that. So if I plan to emulate anything. It’s going to be the cultivation of being smart, articulate, educated and comfortable in the skin I was given.

“It shows that a woman takes good care of her skin, and more people will be jealous of her.”

Who lives their life to make people jealous? That is the most vapid and insecure comment of this whole meditation on “fair skin”.

Learned something new everyday. I always wonder do people actually get what they really want when they treat themselves like they are a commodity instead of a human being worthy love and respect?

It’s funny I never really paid attention to the shades of black until I moved to Texas. I grew up on the east coast and my family ranges from nappy red hair and freckles to redfish brown curls. It makes me sad that we judge each other by the shades of blackiness

Blackness of the fulcrum for all other forms of oppression.

Colorism is crazy. My family comes in all shades, and we have a lot of different races. Me, I look like a black chick. Dark hair, brown skin, though I have freckles. My cousin (the son of my mothers’s brother) has blond hair, green eyes, and is my complexion. While I has the occasional brush with racists, on both sides, colorism wasn’t something I experienced until I was in high school. I got everything from Oreo to white-washed, all because my mother is lighter Black and my father is Jamaican. It’s something I never understood. Darker girls didn’t like me because I was light and had curls as opposed to kinks, and lighter girls didn’t like me because I had curls as opposed to waves. I worry sometimes that it’s Black people doing more damage to Black culture than anything else. When I had my daughter, I was so happy she was darker than me, because her father is dark and I think his skin is so sexy, but he was glad that she was much lighter than he and his family. I understand that society has taught us that fairer is more beautiful, but isn’t it up to us to teach our children better?

That woman in the article jut hasn’t realized that slowly but surely, Asian body type and features are becoming the new standard of feminine beauty… more and more men of all races are not just dating, but are also marrying Asian women (and it seems the opposite with women of other races- they date but do not marry) and more and more beauty regimens (such as japanese hair straightening and the darkening of hair color) implicitly nod toward Asian women… It will be interesting to see what happens in the 21st century and how the idealization of their beauty will affect the weight loss industry as they tend to be smaller in the first place…