Want To Lose 20lbs In Two Hours? Read This!

Pardon me while I snicker:

You see them on 30-second commercials and 30-minute infomercials. You flip past them in glossy magazines, supermarket tabloids and major newspapers. They’re used to promote diet pills, diet books, exercise equipment, gym memberships and fitness DVDs. Their message is as powerful as it is simple: In a short period of time, you can become a better you.

I’m talking about “before and after” photos, like the ones you see with this article. Photos like these often accompany unrealistic weight-loss claims such as, “Lose 20 pounds in 20 days on the new Hawaiian Milk Shake Diet!” And like the claims, the B&A photos themselves can’t be trusted. 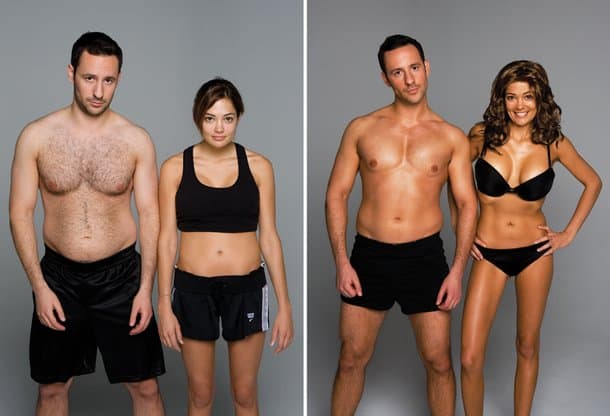 Many such photos begin with the implicit misrepresentation that the person in the “before” photo could be you. In reality, successful “before” models are extremely healthy people who have gotten injured or temporarily let themselves go. The weight loss/muscle gain displayed in these models’ “after” shots merely showcases their bodies’ return to homeostasis.

Some bodybuilders pack on pounds of fat for the sole purpose of taking these dramatic photos. Maybe they’re in cahoots with the makers of the diet supplement or exercise machine they plan to promote, or maybe they’re hoping to win a B&A photo contest, such as the EAS Body-for-Life Challenge. Other bodybuilders take “after” shots during bodybuilding competitions, and then they go home and binge on pizza and beer for a couple of months, and then they take their “before” shots.

Of course, there are simpler ways to take effective/deceptive B&A photos. So if you’re looking to win a B&A photo contest (or looking to become the next Hawaiian Milk Shake Diet spokesperson), follow these guidelines:

Trick No. 1: Suck in your stomach

If you exhale and suck in your stomach, you’re going to look thinner. This is particularly true for men, who store a lot of their body fat around their bellies. Remember to inhale and push out your stomach when you take your “before” photo.

Trick No. 2: Flex your muscles

Take a page from the professional bodybuilders’ competition-pose playbook; you’ll look stronger and more muscular if you flex your muscles. Be careful not to flex your muscles in your “before” shot, though.

Lift some weights immediately before you snap your “after” photo. Like flexing, anaerobic exercise will temporarily increase the size of your muscles.

Trick No. 4: Fix your posture

If you stand up straight and roll back your shoulders, your chest will stick out more, and your waist will look smaller by comparison. So find a mirror, and align your ears, shoulders and hips.

A smile is your best bet. A smile won’t make you look thinner or more muscular, but it will imply that you’re enjoying your new healthy lifestyle (your Sunday afternoons playing flag football at the park, your six-pack-bearing weekends on exotic ports of call …). And don’t grimace in your “before” photo—that’d be too obvious. Instead, go for a blank expression or one indicating slight depression.

Trick No. 6: Shave and bronze

Removing your body hair and tanning will better showcase your muscle definition.

Trick No. 7: Get a mini-makeover

Put on some better-fitting clothes, fix your hair and slap on some foundation.

If you don’t believe that simple tricks like these can be used to simulate weight loss, take another look at the “before and after” photos on this page. They were taken just two hours apart, and they have not been digitally altered in any way.

After the photo shoot, Battistini and I got to talking about the diet pills that are typically advertised with B&A photos. “Most consumers,” said Battistini, “aren’t aware of what’s in those supplements because they’re not regulated by the FDA.” Battistini also told me, “The American Dietetic Association encourages people to lose one-and-a-half to two pounds per week. But with consultation of a physician it might be acceptable for obese individuals to lose more than the recommended amount, per week.”

Keep that in mind the next time you’re debating whether to spend $39.95 on another “Lose 20 pounds in 20 days!” scheme advertised with B&A photos. And remember, you really can become a better you … but it might take some time and hard work. [source]

Pair this up with the video from FuriousPete, and it doesn’t seem like any of this stuff is real, huh?

The Power of A Twenty Dollar Bill

That is awesome. Like in the funny way that showcases how fake the B&A photos are. Excellent post!

You forgot one – Get fake boobs!

Yeah, I pretty much knew all of those ads were crap. But I just seriously LOL’d at those pics up top!!!!!! hahahahha!!! It is hilarious (and of course SADly true!) that the woman’s WEIGHT LOSS included adding 10lbs of BOOBS AND HAIR!!!!! It reminds me of that show “The Swan” where they gave makeovers to people. I always noticed that it didn’t matter WHAT it was that they needed fixed in the beginning…teeth, club foot, halitosis…the end result was ALWAYS that PLUS BOOBS!!!! I’m like, did she even ASK for DD’s or was she just under getting her grill fixed and they were like “What the hell! Give her huge boobs while we have her here!” RIDICULOUS!!!

Hahhah…and just realized she was just HIDING the boobs in the first pic. hahahha…STILL!

I have a question about real results. First, congratulations on your successful weight loss. Can you share any tips for preventing loose skin after significant weight loss?

A clean diet, proper hydration, and burn ALL the fat you can. It’s pretty simple. Doesn’t happen overnight, but it happens.

Thanks for the tip. I have been losing weight on and off for the past 9 years and I am contemplating surgery to remove loose skin especially in my ‘pooch’ abominable area. I hate that area. I do reverse crunches to help.

Nope. Cardio and a clean diet gets rid of that. Crunches only build muscle in the area. They won’t do anything about a pooch that actually “pudges.”

Why does the female model look like she is wearing a lace front in the 2nd photo? lol

I hate all those ads. This is great stuff here. I want more people to read what you’ve written because it’s so true. I went to an all girl school, and everyone was so obsessed with ads and magazines. I still want my butt to be firmer. Guess I better start flexing my butt muscles. LOL.

I saw a tweet about “black women losing weight” so my inquiring mind set off to see what challenges were gong to be different for a black woman. I see from your well written article that what I had susupected was correct. Absolutely no difference based on one’s ethnic background is kinda how I was “leaning” in my own understandings. I always take some time to try and understand others here on our little “speck of dirt” called Earth. Knowing I wasn’t qualified to to make any kind of recommendations to my black friends/clients without getting some real “insider type” information. I have had my friends, etc. ask me how I overcame some of the challenges with my own weight problems and I have pretty much told them all the same thing like that Erika had commented on before about changing what we put into our bodies and the eating habits that usually gets people to be overweight or obesse in some cases. Another reader commented, I believe it was Starchile that all the ads are “crap” but that really isn’t the case for all weight loss programs. Granted so many of them do use paid professionals for those before & after shots but there are some programs that are far from “crap”. I know because about 5 years ago I was weighing in about 285-290lbs which was some 65-70 pounds over my ideal body weight. I had always struggeld with weight from when I was only about 10-12 years old all thoughout my twenties and long into my thirties. It was over 5 years ago I decided to make some changes that would allow me to stop “being a prisoner” to all that excess weight I had carried around for years. I did a lot of diets, did weight watchers, and didn’t have any real results until I educated myself about why the weight had become such an issue that it was affecting my health & happiness most of the time. I went with a program from a certified nutritionist (which is what Erika sounded like she just might be) and with just a “walking routine daily” and excercise a couple times a week I have managed to keep 35lbs of that weight off since. I still fluctuate and am constantly trying to achieve that “ideal weight” but am always on the right track and continue to loose small amounts even now after the 35lbs were gone. No I not going show any “photo shopped” before & after pics, not going to show any at all but know that I am lots more energetic and overall a lot happier with my life today. I share what helped me with others knowing that when we share & encourage others it makes for a better world for us ALL to live in together. Thanks for your candid approach to writing your articles, your genuine concern is easily recognized by your writing. Keep up the good work. Thanks for letting me share as well, Take Care, Have Fun, Be Safe. TCHFBS…my own little acronym I’m trying to send around the world like LOL was for somebody. Have a “better than great” week!

I had no idea that models deliberately put on the weight for before photos! I always thought they just chose people with ‘potential’ then worked them like crazy – makes so much more sense, though. Loved this post!

Uh, is the woman model in the picture the same one? Or is she wearing heels? Because she looks taller in the second picture… it looks like a different model

She probably IS wearing heels! I’d add that to the list since heels kind of make everything line up a little differently (sexier) and as those of us who are short know, more height makes a person appear thinner!