Home What Are You Eating? The Right To Know Proposition, From A Geneticist’s Perspective

The Right To Know Proposition, From A Geneticist’s Perspective

Mother Jones, effectively dismantling everything you thought about food nutrient by nutrient, had an actual geneticist weigh in on the topic of California’s Proposition 37, which reads the following:

Before I quote her article,

Actually, scratch that. I sincerely read the argument against Proposition 37, and was thoroughly disgusted. The counterarguments are rooted in the same bulljive these companies have been misrepresenting for years, now, and I’m not giving it a place in this post or even on this blog until I can thoroughly go through it, line by line, and debunk it myself. I only wish I would’ve done it sooner.

There is absolutely no reason to not invest in educating the public. It isn’t costly to anyone but the companies, and that’s only because it’d require them to do what they can to avoid having to label their foods… which would mean having the genetically engineered material removed from their products.

Countless countries already have this law in place. The only reason we don’t is because our USDA and FDA – as well as our Supreme Court… I see you, Clarence Thomas, Monsanto alumnus – are overrun by ConAgra and Monsanto former (and future, don’t sleep) employees. Period. Any attempt to obfuscate the truth about a product that a consumer has to purchase is an attempt to undermine the integrity of capitalism, and any government that allows it to go on is only showing us the extent to which its been bought and paid for.

There’s a documentary out there titled Killer At Large, and there’s a great clip in there in a California court room where a representative of the food industry basically implies, “We believe that the public won’t buy our stuff if we tell them what’s in it.”

On to the MoJo essay, though: 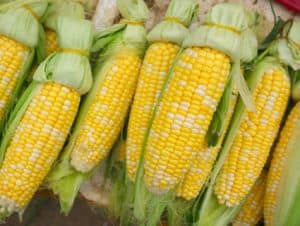 Genetically engineered (GE) sweet corn is being sold at a Walmart near you. And because that company has said it sees “no scientifically validated safety reasons to implement restrictions on this product,” and because US regulations don’t require it, it isn’t labeled “GE.”

Developed by Monsanto, this GE sweet corn is beautiful by fresh corn standards—not a worm hole in sight—since it contains not one, not two, but three insecticides engineered into each cell of every kernel. Having the corn make its own insecticides means that farmers don’t have to spray those chemicals out in the environment. The end result is that no earworms or European corn borers will have anything to do with this good-looking GE sweet corn. But, you may be wondering: should I?

So here’s the 411 on GE sweet corn at Walmart, based in large part on information available on Monsanto’s website.

First, although Monsanto provides links to “Peer Reviewed Safety Publications” for many of its other GE crop products, it does not do so for its “Seminis Performance Series Sweet Corn.” The peer-review process is a hallmark of scientific validation.

As it turns out, scientists have found reason for concern about the sweet corn. There’s this peer-reviewed report documenting the development of resistance among western corn rootworms to one of the bacterial insecticides present in Monsanto’s GE sweet corn. Another peer-reviewed study finds that weeds such as Palmer amaranth are now resistant to glyphosate, the active ingredient in products like Monsanto’s Roundup herbicide. Since a fourth foreign gene in Monsanto’s GE sweet corn confers glyphosate-resistance to it, I expect we’ll see even more of these “superbugs” and “superweeds” showing up in US farmlands soon, unless this new GE sweet corn is agriculturally managed a lot more carefully than previous GE crops have been.

But that’s not what California’s Proposition 37 is about. Instead, it asks: Do you deserve some indication that pesticides are intentionally present in the fresh corn you contemplate purchasing and eating? And should you have the right to support, or not support, agricultural methods used to produce food crops that could also be producing new plant pests at the same time? My answer: Yes, definitely.

So… what do you think about this? Californians, what’s going on?

For more information on California’s Proposition 37, visit Ballotpedia’s lengthy and balanced wiki page on it… and pay close attention to how voting goes on it… after you’ve voted, of course.

If I was in California it would be a definite yes. Hope the East Coast gets to vote also. I would definitely love to know. Here I am eating raw food for the enzymes and nutrition to regulate my body then I watch Dr Oz and find out even Papaya is also genetically engineered.

He had on a scientist that swore up and down I would give it to my children. How can scientist improve upon the original..that kind of ego is why America is in the state it is in now. They never know and if they do the risk is so small why even mention it, until it you or your family. There are better ways to do this and still make a profit.

The list is growing longer and longer and I want to know. Unless you keep track of this topic most American’s don’t know. Always trying to take the cheap way out to make a better profit as an excuse.

Genetically altered food don’t give the energy and the other intangibles that the scientific community aren’t aware. It gives life to us, toying with it damages it’s structure. I hope the NY/NJ area also adopt this. I read up on anything to help with healing my body. Now I go by how I feel afterwards when I eat some food to determine to include from my diet.

Already voted for it this morning!

I really hope that Prop 37 passes. I am pregnant and terrified about the corn. Not because we buy this corn, but because of cross-breeding/pollination and how Monsanto in general (legally) seeks to take over other crops. It’s not just the first generation of GE/GMO products we have to worry about, it’s the offspring. Scary. And there’s also the fact that corn is in everything (as a preservative, sweetener or additive) from ethanol to meat preservatives and most animal feed. I really hope that Prop 37 passes and other states follow suit. I need to know what’s in my food. I want to know what my food eats. I want enough information to make an informed choice.

I need prop 37 to pass. The food offered at a cheaper rate to Americans is disgusting. the people should have the choice to know what they are buying. Maybe they will stop making processed or genetically modified foods. Since they are worried about people not purchasing the product. The restaurants should tell their consumer if they cook genetically modified foods as well. It should be a requirement.