Home What Are You Eating? The Problem With Processed Foods, Part II: The Change In Food Manufacturing

The Problem With Processed Foods, Part II: The Change In Food Manufacturing

I get lots of questions about why I’m such a huge stickler for chemical-free foods and why it matters… and instead of writing 3,500 words every time I’m asked, I wrote one 3,500-word blog post.

Surprise, surprise, no one was reading all that.

That’s okay. I’m breaking it up into a few parts that everyone will be able to digest slowly and properly (pun intended), and hopefully we can explore why healthier, cleaner, more chemical-free food choices are so important. It is critical that any person embarking on a clean eating journey have an understanding of why the journey is so vital to their success in losing weight.

Consider this part II of the series.

I’m a small business owner, so while I could interject right here about what it does to our local communities to not be able to buy our food locally and keep our money in our communities… I won’t. Just know that I could. 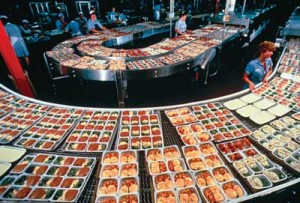 As I said, the larger food manufacturing grew, the more we were distanced from it’s production, and the less oversight we were granted to it’s creation and ingredients. Because (in my opinion) the government wanted to simply do what it could to ensure that the US had a consistent food supply, lots of leeway was given to big food factories to help ease them along their way in supplying our supermarkets with food – glorious food! Want an example? The food industry was able to get the FDA to change the law – imitation foods that weren’t nutritionally deficient in comparison to their whole counterparts didn’t have to be clearly marked as “imitation.” (You can skip the below quote if you like because I’ve quoted it before, but it’s valuable enough to read twice.)

The 1938 Food, Drug and Cosmetic Act imposed strict rules requiring that the word “imitation” appear on any food product that was, well, an imitation … [And] the food industry [argued over the word], strenuously for decades, and in 1973 it finally succeeded in getting the imitation rule tossed out, a little-notice but momentous step that helped speed America down the path of nutritionism.

… The American Heart Association, eager to get Americans off saturated fats and onto vegetable oils (including hydrogenated vegetable oils), was actively encouraging the food industry to “modify” various foods to get the saturated fats and cholesterol out of them, and in the early seventies the association urged that “any existing and regulatory barriers to the marketing of such foods be removed.”

And so they were when, in 1973, the FDA (not, note, the Congress that wrote the law) simply repealed the 1938 rule concerning imitation foods. … The revised imitation rule held that as long as an imitation product was not “nutritionally inferior” to the natural food it sought to impersonate—as long as it had the same quantities of recongized nutrients—the imitation could be marketed without using the dreaded “i” word. — In Defense of Food: An Eater’s Manifesto

Families who survived the rationing and the famine were happy about this! No more struggling, breaking their backs to stretch food. They could eat like the rich folks! They could also gain weight like ’em, too. Alas, the way men and women were employed in this era, they weren’t granted the same amount of time for leisurely activity like the rich. In other words, we were eating “like the rich,” but not burning the weight off like ’em. This part of the story, can be evidenced by Katharine Flegel’s study of weight gain from the sixties to the present. This New Yorker article summarizes it briefly:

In the early nineteen-nineties, a researcher at the C.D.C. named Katherine Flegal was reviewing the results of the survey then under way when she came across figures that seemed incredible. According to the first National Health study, which was done in the early nineteen-sixties, 24.3 per cent of American adults were overweight—roughly defined as having a body-mass index greater than twenty-seven. (The metrics are slightly different for men and women; by the study’s definition, a woman who is five feet tall would count as overweight if she was more than a hundred and forty pounds, and a man who is six feet tall if he weighed more than two hundred and four pounds.) By the time of the second survey, conducted in the early nineteen-seventies, the proportion of overweight adults had increased by three-quarters of a per cent, to twenty-five per cent, and, by the third survey, in the late seventies, it had edged up to 25.4 per cent. The results that Flegal found so surprising came from the fourth survey. During the nineteen-eighties, the American gut, instead of expanding very gradually, had ballooned: 33.3 per cent of adults now qualified as overweight. Flegal began asking around at professional meetings. Had other researchers noticed a change in Americans’ waistlines? They had not. This left her feeling even more perplexed. She knew that errors could have sneaked into the data in a variety of ways, so she and her colleagues checked and rechecked the figures. There was no problem that they could identify. Finally, in 1994, they published their findings in the Journal of the American Medical Association. In just ten years, they showed, Americans had collectively gained more than a billion pounds. “If this was about tuberculosis, it would be called an epidemic,” another researcher wrote in an editorial accompanying the report.

Food was becoming way more accessible to us. I do want to go back to the point about the FDA’s law about imitation substances, though. It does a lot more to the food industry than you think it does. Take a loaf of bread, for example. Bread has maybe five ingredients in it – flour, water, sugar, salt, and yeast – but if you look on the label for the bread in your house right now? You see what – hyphenated chemicals. The food industry now has the ability to put anything in your food, so long as it is not deficient in the nutrients that science recognizes are valuable… in comparison to the food it imitates.  Remember this part. No, really – remember this part.

Stay tuned for part III, on the nutritional deficiencies of processed food!

I have been reading your posts about food processing and thought this update would be of interest : http://publichealth.lacounty.gov/phcommon/public/newsalert/nalertprint.cfm?id=10719

Here is a partial quote I found of interest: “The concern is that some antibiotics given to treat illnesses in people are widely used on animals to promote disease prevention and weight gain…” If it promotes weight gain in other mammals, why would it not promote weight gain in us?

“Take a loaf of bread, for example. Bread has maybe five ingredients in it – flour, water, sugar, salt, and yeast – but if you look on the label for the bread in your house right now? You see what – hyphenated chemicals.”

I’m in India right now, but I’m sad to say that even in the grocery stores here they have this crazy chemicals. And almost all of the imports from the USA have corn syrup – in salad dressings, pancake syrups, everything. It’s so sad and I know India’s obesity rate is increasing as well!

This is crazy!!! I just was having a small argument with my boyfriend as we were grocery shopping. I am trying to embrace clean eating and he wanted to save .34 cents. I told him if you want butter it will need to be butter… the one with the three ingredients. Cream, milk and salt. He read the label on the cheap “margarine” he was holding and was shocked @ what was in it. So… suffice to say he thinks I’m a food snob. I’m not! I just want wholesome food! When did that become snob eating. Believe me I want some of my good ole processed and questionable ingredient food (at times) but when I think of what I am giving my poor body… I just CANNOT!

Lastly, I am a compulsive over eater and have had weight struggles my whole life. I just found out I was a compulsive eater so this new way of thinking about food is intriguing and enlightening. I like it …A LOT!!!