Video Vault: Robyn O’Brien, And The Quest For Real Food

Lovingly dubbed “Food’s Erin Brockovich,” Robyn O’Brien has spent quite a few years doing what this blog has slowly headed toward, which is campaigning for real food. To quote the NYTimes article that covers her: 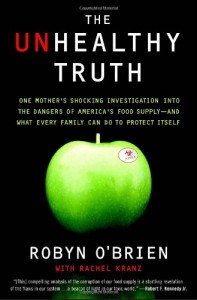 She grew up in a staunchly Republican family in Houston where lunch at the country club frequented by George and Barbara Bush followed Sunday church services. She was an honors student, earned a master’s degree in business and, like her husband, Jeff, made a living as a financial analyst.

Ms. O’Brien was also the kind of mom who rolled her eyes when the kid with a peanut allergy showed up at the birthday party. Then, about two years ago, she fed her youngest child scrambled eggs. The baby’s face quickly swelled into a grotesque mask. “What did you spray on her?” she screamed at her other children. Little Tory had a severe food allergy, and Ms. O’Brien’s journey had begun.

By late that night, she had designed a universal symbol to identify children with food allergies. She now puts the icon, a green stop sign with an exclamation point, on lunch bags, stickers and even the little charms children use to dress up their Crocs. These products and others are sold on her Web site, AllergyKids.com, which she unveiled, strategically, on Mother’s Day in 2006.

The $30,000 Ms. O’Brien made from the products last year is incidental, she said. Working largely from a laptop on her dining room table, she has looked deep into the perplexing world of childhood food allergies and seen a conspiracy that threatens the health of America’s children. And, she profoundly believes, it is up to her and parents everywhere to stop it.

Her theory — that the food supply is being manipulated with additives, genetic modification, hormones and herbicides, causing increases in allergies, autism and other disorders in children — is not supported by leading researchers or the largest allergy advocacy groups.

That only feeds Ms. O’Brien’s conviction that the influence of what she sees as the profit-hungry food industry runs deep. In just a few dizzying steps, she can take you from a box of Kraft macaroni and cheese to Monsanto’s genetically modified seeds to Donald H. Rumsfeld, who once ran the company that created the sweetener aspartame.

Through creative use of e-mail, relentless inquiry and a persona carefully crafted around the protective mother archetype, Ms. O’Brien has emerged as a populist hero among parents who troll the Internet for any hint about why their children have food allergies.

“You have changed my life … my diet … my health … my spirit … and I thank YOU,” a father who had lost his teenage daughter to anaphylactic shock told her by e-mail.

Ms. O’Brien encourages people to do what she did: throw out as much nonorganic processed food as you can afford to. Avoid anything genetically modified, artificially created or raised with hormones. Don’t eat food with ingredients you can’t pronounce.

Once she cleaned out her cupboards, she said, her four children started behaving better. Their health problems, which her doctor attributed to allergies to milk and other foods, cleared up.

In the video, Robyn (who gos by @unhealthytruth on twitter) does a fair amount of explaining about the money behind the moves made regarding our food supply. It’s an extremely valuable video worth viewing. As we all know, the money is always the motive – not our safety or the lives of our loved ones – and we’d be wise to keep that in mind when we trust nameless, faceless entities with our health.

Robyn’s book, The Unhealthy Truth: One Mother’s Shocking Investigation into the Dangers of America’s Food Supply– and What Every Family Can Do to Protect Itself, is available right now at Amazon, and while I don’t yet own a copy… after viewing this presentation? I’m going to have to check it out.

An Open Letter: Domestic Violence, Self Esteem, and the Right Kind of Support

Seven Foods You Should Never Eat

Video Vault: The Best Treadmill Fails Of All...

I’m hugely in favor of clean eating, but I’m kinda creeped out that she feels the need to draw a connection all the way from processed foods to autism, etc. — sometimes our kids aren’t as healthy as we desperately want them to be, and there’s no reason for it. Sometimes it’s the “crunchy” kids who have problems, and the eat-whatever kids are fine, like those rare cases of “I smoked 10 cigarettes a day for 80 years and I’m not dead yet!”

Wow. I had an experience when I was younger, I went to a weight loss camp where all they taught was to eat low fat, no carbohydrates, splenda or aspartame sweetened foods. All we did was work out all day. It was never about clean eating. The foods was horribly gross and everyone uses to come back and the girl suffered from horrible allergies. It was never about nutrients. The genetically modified chemical laden foods is messing with our health.

I’m not a parent YET, but this is one of the main reasons I started my journey to eating clean. Unfortunately, science can sometimes take a long time to catch up to our guts, especially when it’s been manipulated and paid for. Hey I don’t care what they say, eating better quality food can’t hurt. I see the job they’ve been doing with “organic” and “HFC”.

That seriously made me cry. I want to give her a hug.