Presented… with a smile:

From the makers of the video, the Center for Science in the Public Interest:

The Center for Science in the Public Interest is escalating its longstanding campaign to reduce the consumption of soda and other sugary drinks today with the release of an animated short film exposing the drinks’ unhappy health consequences. 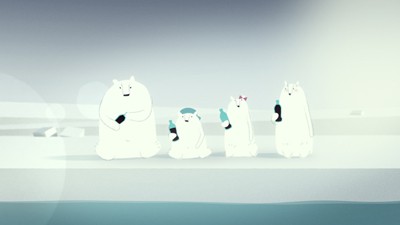 The Real Bears tells the story of a family of polar bears who, even in their distant Arctic environment, are not immune from sunny marketing messages from Big Soda. The whole family is consuming too much soda… and is experiencing everything from weight gain to tooth decay to problems in the bedroom. Only after recuperating from a terrifying visit to Doc Fox’s chilly surgical suite does Pop Bear come to realize that soda has brought nothing but sadness to his family. In the film’s stirring dénouement, he leads his family to reclaim their health—and their happiness.

The film features an original song, Sugar, by Grammy-award winning singer-songwriter Jason Mraz which he wrote and performed with the San Diego-based rapper MC Flow.

Though consumption has declined slightly in recent years, soda and sugary drinks still are the biggest single source of calories in the American diet, accounting for about 7 percent. And while Coca-Cola, PepsiCo, and other soda companies spend lavishly to position the products as sources of happiness, sugary drinks are directly linked to obesity and diabetes. Each additional sugary drink consumed per day increases the likelihood of a child becoming obese by about 60 percent. Drinking one or two sugary drinks per day increases one’s risk for type 2 diabetes by 27 percent. The Real Bears family learns—like many real American families have—that these conditions and their complications are sources of sadness, not happiness.

“Coke and Pepsi have skillfully cultivated incredibly strong emotional bonds with consumers around the world even though their products actually cause quite a bit of misery,” said CSPI executive director Michael F. Jacobson. “The Real Bears seeks to sever some of those bonds, and to get people thinking about what they’re drinking. We don’t have their budgets but we do have the truth. And the truth is that soda equals sadness.”

Shhh, Idiots are Talking: “…with Her Elephant Ankles and Gigantic Arse”

Overeating: Comparable To Drug Use, Cause of Mental Illness?

frickin’ loved it! thanks for that & your rad website.

This commercial is funny. I rarely consume soda but once I go to a baby shower, school event with sugary drinks, and a party with little kids its in my hands. I find myself drinking some but I have been leaving the soda alone in social settings. People say I am a social drinker but I am a social soda drinker but I think I will bring lemon water to these events instead.

I hadn’t seen this. Thank you for sharing, I’ll be sharing this with family too.

Thanks! I already re-posted this!

I hadn’t seen this. I work in a community health center; I wish I could have it playing in a loop in my waiting room!

That was awesome! I am not a soda drinker because my mom never bought it for us growing up, therefore I never developed a taste for the stuff. I need to show this to my 23yo daughter tho! :/

Loved this, man! It reinforces the truth that when people truly love their families, they can overcome the marketing. We know when something is not good for us, it just takes a few moments of clarity (and that usually involves looking at our children and not wanting them to suffer) to spur us take action.