Home Exercise 101Running Sound Off: To Run, Or Not To Run… In A Group?

In the comments of another #Runtober post, tons of people mentioned the benefit of running with a group… and that’s something I’d never done before… until this last weekend, when I headed out with the other FitFluential Ambassadors to run with Reebok’s Run Club that they’re testing out. It was a quick two miles, but it was laced with boot-camp-style workouts every third of a mile. Did you see a bunch of people squatting, on one leg, in Bryant Park this past Saturday? Yep.. that was us. 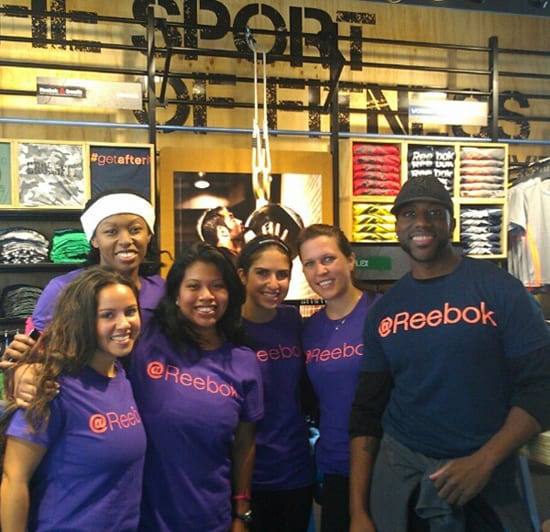 The run was fun and I can see how running with a team can give one that extra push to go even harder but, as I’ve said before, I’m a loner. I run solo… if you’re not counting the puppies.

That being said… what running groups do you run with? Have you given group running a try? Are you a lone runner? Did you dislike your group run experience? What makes group running valuable to you?

Special shout out to Girls On The Run, Team In Training, GirlTrek and Black Girls Run!

Supermarket Swindle: Are You Sure That’s Ice Cream?

I prefer running in a group but mostly for my long runs, over 8 miles. I feel much more motivated and am likely to keep a consistent pace when I’m in a group. It has also helped me to knock 28 minutes off of my half-marathon times in the past two years. Running with the Jeff Galloway program has helped me become a more efficient runner.

I run alone. Always. I’ve tried running with groups and it doesn’t work for me. In order to have a good run that doesn’t lead to injury, I need to set my own pace and listen carefully to my body, and pay attention to my breath. I speed up when I feel good and slow down when I feel not so good. I also like to use my running time as time to meditate, which is hard to do with a bunch of other people around. I don’t even listen to music anymore when I run, just my thoughts, or (preferably) my lack of thoughts, and the fluctuating rhythms of my breath. Pure bliss.

Couldn’t agree more… except for when it comes to the music. I’m just not there yet. LOL

There are a number of reasons for why I came to running without music, one of which was the time it took to find the RIGHT tunes. It’s a very specific thing, but when you lock into the perfect combination of rhythm, tempo, vocal quality, etc., that actually makes you go faster, it’s exciting. If you were to devote a whole blog post to “running music” I’d pay close attention and might even dust off my ipod!

I like both. I will lace up and go out for a lone run. But I also do standing weekly runs with Black Girls Run here in Baltimore. I may get lazy when I’m alone and end earlier or do less miles. But the camaraderie of the group helps me to keep going and finish.

I find that I have to mix it up between solo runs and group runs. I enjoy the camaraderie of running with a group and I feel like sometimes it pushes me harder in my runs out of competitiveness; I don’t like finishing last. But if I have specific goal, for instance–I’m training for a race and aiming for a specific time, I’ll run by myself also because I want to be able to focus on my own time and distance without adjusting to the group. Right now I try to do one run a week with a group, 2 by myself.

I live in OM, and was wondering if your group welcomes new runners.

I do both. But mostly I like running alone. My music, my pace, my thoughts no chatter. However there are times when I will join a BlackGirls Run in Delaware meetup .

I am a fan of running alone. I recently ran my first half marathon and I was doing great! I had my music playlist on point plus my pace was great then boom! All of a sudden at mile 5 this chick decided I was her new running best friend and screwed up my pace from talking my ear off up until mile 12 and then bolted on me! At that point I was so worn out from trying to breath and talk to her I was ready to pass out and barely made it to the finish. I was so angry but I am stil happy I made it! 🙂

I’ve just joined a running club and it was the best decision I’ve made. Previously I have only ever really run by myself and didn’t like running with company but found that I couldn’t run and talk at the same time. However, I now find that being able to have a conversation and run at the same time has actually regulated my breathing.

The group I am running with have helped me increase my speed and stamina and it’s nice to have the support of others especially if you are training for a marathon!

I run with Black Girls Run South Florida and I love it. I was always a runner but got tired of running alone. Running with the ladies is great and pushes me to run longer. I’m currently preparing to run my first half marathon. This group of ladies helped me take my running to another level. No one left behind…run, walk or trot.

I belong to BLACK GIRLS RUN, at the moment I perfer not to run, I walk and am enjoying every step I take.

Hi! Just wanted to invite you out to another Reebok Fithub Run Club tonight Nov. 13 at 5:45pm Tell friends and bring them along if you can make it. Meet @ Reebok NYC 5th Ave (37th and 5th)

I’m with Black Girls Run – Delaware Chapter. I love it! These sisters are so motivational and the contact with keep with each other via our facebook group helps us to coordinate runs, provides encouragement, tips, mentoring, etc. it’s a family, not just a run club where we see each other on the track and no more. we have several outings and gatherings throughout the year. you’re gaining helpers. i started as a walker and no one ever left me behind. i’m just starting to jog now and i have support at that level too. i love it.

I would love to join the BGR-DE Chapter. Can you tell me how to join?
I live in Newark. Would love to hear back from you.

Check out the BGR! website at blackgirlsrun.com. They should have all the details you need, there.

I used to run alone and only alone, and then I started running with a friend for weekly long runs, and then I got hooked on that and joined my local MomsRunThisTown group. I still run alone for short runs, and for some long runs, but 10 miles goes by so much easier with friends to motivate you and chat with!