Home Social Construct Support for Baltimore, A Request for Empathy, and a Note on Censorship

Support for Baltimore, A Request for Empathy, and a Note on Censorship

You called the hood “sketchy” and made sure you rolled up your windows and locked your doors when you absolutely HAD to drive through it. You even created and make copious use of apps that HELP YOU AVOID THE “SKETCHY” NEIGHBORHOODS.

Now, when you see people destroying it, you want to talk that good sh-t about “savage” behavior, “destroying property,” “earned disrespect,” “delinquency,” “why should a criminal get justice?” and “black unemployment.”

And, of course, all this and you want your cookies for not being racist, all because you didn’t say “n-gger.” You want us to throw a celebration for your petulant ass for not hanging a human being from the poplar tree in your front yard.

Congratulations for finding a thousand different ways to say “n-gger.” Congratulations for, instead of spittin’ that dog whistle nonsense about “lazy black people,” you now want to crow on about how all the burned businesses only add to “black unemployment,” while some cornball friend of yours snarks about how that’s “probably what they wanted.” Neither one of you realized that the hood doesn’t own those businesses, rarely ever is employed BY those businesses, and when they are…they’re paid literal pennies on the dollar of what they’re worth. None of you read that the unemployment rate for that particular part of Baltimore is hovering around 25%. But you’re worried about businesses there NOW.

Congratulations for, instead of repeating that petty ridiculousness about “makers” and “takers,” you’re now focused on “looting.” The “looters.” The “looters.” The “looters.” Guess what? That population is so economically depressed – no jobs, no banks to help them get loans so they can create their OWN economic opportunity, no ability to actually build the generational wealth necessary to pass money down to their kids so THEY can create their own economic opportunity – that they feel like they have next to nothing. Why are you surprised that people with nothing to lose will take what someone else has…ESPECIALLY when they value those THINGS more than they value human life?

You expect people who have purposefully had their property stripped from them through eminent domain, through corruption of federal policy, through manipulation, through burning down entire avenue blocks full of their businesses….after you’ve taken everything from them, you expect them give a damn about what YOU have? You’ve already taught them these things mean nothing and can be stolen at the drop of a hat – including their lives.

Congratulations for not hanging any black people anymore. Except, oh wait, you are. Not only are black Americans still being hung in the US, but you’ve evooooolved! You’ve found new and creative ways to punish and penalize and torture black and brown people OUTSIDE THE CONFINES OF OUR LEGAL SYSTEM. So, instead of that whole trial, jury, hire lawyer, innocent until proven guilty thing we’ve created to protect the individual livelihoods and freedoms of our great nation, we’re OKAAAAAAYYYY with *certain* people being murdered extrajudicially because they “shouldn’t have been breaking the law.” Except, what’s the deal with that criminal scumbag police officer who lied and claimed HIS victim stole his taser and therefore earned the death sentence HE received… and we would’ve believed that, too, if it weren’t for someone determined to ensure that the truth was heard.

Somehow, the Oklahoma bomber, the Boston bomber, the Colorado theater shooter, and countless other criminals manage to be taken alive… but a man standing on the street allegedly carrying a knife is grounds for brutal treatment. A man who takes off running for reasons unknown is justification for a criminal scumbag officer to square up and shoot him to death.

It is NOT okay, however, to destroy some shit when you’re rallying against the fact that people are consistently denied access to the justice system because cops are acting like judge, jury, and executioner by shooting people just because they have black skin. I got it, yeah?

Congratulations for not saying “n-gger,” and for not being photographed eating any ice cream cones at any lynchings in the US. I’m proud of you! That’s big progress!

Here’s your cookie. And a book. Focus more on the book part, though – maybe that’ll teach some of you some damn empathy for perpetually and purposefully disenfranchised people. Maybe you’ll give a damn about them before they have to burn a tenth of your city down to get media attention. Maybe you’ll learn that they, too, are human, and deserve access to all the same rights as the rest of us, no matter how much money they have. [original source]

My heart is with you, Baltimore, and you, Ferguson, and here in NYC, and you, North Charleston, and you, Detroit, and you, and every other city likely to suffer from the civil unrest borne of people who feel like the only way they could get attention drawn to their needs and concerns is if they blow up your beloved pharmacy.

I will never agree with destroying my city, but guess what? I understand – infinitely, so – why it happens. And I’m not going to front for the cameras or anyone, for that matter, to pretend that I don’t.

Actually, I’ll just let the tweets speak for themselves. This is a storify of the conversations we’d been having on Twitter the past couple of days, with some insight you might find helpful. (I had it embedded, but I didn’t realize how long it’d be, so I’m merely linking to it. You’re free to check it out.)

Some people will work overtime to miss my point, so I want to make it clear: if people have even a passing interest in changing the nature of what is happening in our society, we cannot start from a place of interpreting everything as blame. We cannot translate “understanding” into “excuse making.” If we want to work on poverty, if we want to work on racism, we have to bring ourselves to a place where we can say that, even though we don’t agree… we understand.

I don’t agree with burning down the neighborhood where I raise my child, and I have too much to lose to be involved. But guess what? I can empathize with those who don’t feel as if they have anything, and I know that many have been denied the ability to build enough to the point where they could have something to lose.

The very people refusing to empathize with or even listen to the people of the United States who want police officers to stop playing judge, jury, and executioner… are the very ones halting change in our society. They are the ones who don’t want to hear the pain and anguish, until it’s time for politicians to pander to “the middle class,” then it’s time toyelp and pray that they’re heard. They are the ones on which any nuance is lost – everyone is a drug dealer deserving of death, until their daughter or niece gets busted selling their ‘scrips and then we need to beg the judge for mercy. They are the ones who have been taught, through a century of anti-blackness, that black pain is unimportant, unimportant, unimportant. Black pain – in myriad forms – is deserved, self-caused, and necessary. It will “teach” them. We deserve the cruelty. It’s what many people have been taught in a low-inference fashion, and it always seeps out in times like this.

The people we need to listen the most, are often the ones most resistant to human connection with us. They consistently question and challenge our humanity, but they are the inhumane ones. They are the problem. May they learn.

May we all do our part to bring peace – even if “our part” merely consists of saying things like “I don’t agree, but wow…I understand.”

Hundreds of likes and shares on a post from my private page – not the one for the blog – and lots of dialogue later, I was happy to contribute what I did to the dialogue happening there.

Alas, someone else didn’t agree. The post attracted its fair share of racist trolls, idiots, and unpleasant people, and I enjoyed the camaraderie that I experienced with strangers, as we shared the task of challenging their thinking. The weirdest part of it all was how Facebook itself treated my essay.

I received this notification: 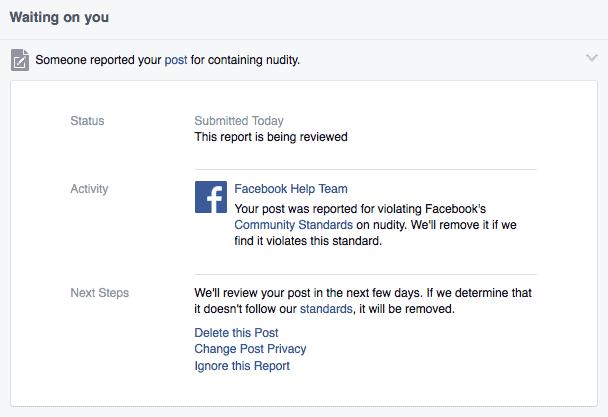 …followed by this one, which I expected since there wasn’t actually any photo in the post… 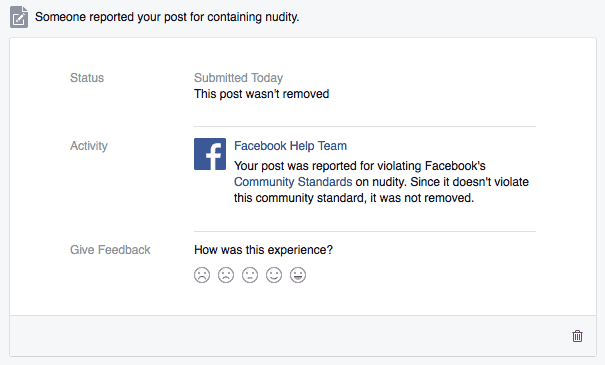 …only to be completed with this message over a half-a-day later.

I couldn’t imagine what the problem was.

Either you’re on the right side of history, or you’re not.

5 Things You Should Know About Becoming A Great Cook

Hi, Erika, do you think you will be reposting this? I would love to share this on my own page.Is it ok to copy and paste this onto my Facebook page?

Racists need to be called out whenever possible.

I don’t want to run the risk of losing my FB account and, thus, the BGG2WL FB page, so I don’t think I’ll be reposting. Besides, I’m so disappointed in the entire affair that I’m pretty much done with FB at this point.

You’re free to share the link to this on your FB page, but I think it’s best if the contents stay here. I hope you’ll understand.

[…] This FB post by Erika Nicole Kendall. (Note: This now links to her blog since FB apparently deleted her post, which is a whole different problem, I think.) […]

Just wanted to say again how SPOT ON you are with your truth. Thank you so very much for sharing. Much love!

You can’t see me, but I am giving you a standing ovation on this post, girl! Well written!!!!

I have been following you for quite some time now and as always you are always on point! Well said!