Considering the questions surrounding Waco’s very own Fat Ho Burgers between both the FB convo as well as the Weekend WTF? post dedicated to it, I figured this follow-up from Eat My Words would be appropriate to share: 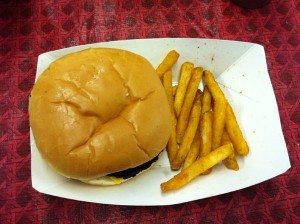 The launch of Fat Ho Burgers feels like a soft opening. A temporary sign featuring the name in bright red letters flutters above the front door. Not much has been done to spruce up the interior—the mural of a mariachi band on the wall makes it clear that the restaurant has not received a fresh coat of paint since its last life as a taqueria. Mismatched chairs are pushed up to the tables, which are covered in plastic-coated red tablecloths.

Newly minted restaurateur Lakita Evans, 24, said the joint’s provocative name came to her when she was watching Mo’Nique’s 2006 film Phat Girlz. “I was trying to make myself laugh,” she said. “I knew the name would put a smile on people’s faces, so I just did it.”

Evans, a 2005 graduate of Waco High School, studied culinary arts at community college and worked overnight shifts in the produce department at Walmart prior to striking it out on her own. “All I wanted to do is find a way in this economy,” she said. “I was just planning on opening a regular burger shack. I didn’t know it was going to be like this.” Fat Ho Burgers has been so popular that they’ve been selling out each day.

The burger joint has enjoyed both national and international media attention since opening its doors last Tuesday. There has been some handwringing over the suggestive name from local churches, and others have complained of the restaurant’s casual misogyny. But business is booming. Some glass-half-full Wacoans view any press as good press for the town. “Shout out to @fatHOburger for making Waco in the news for something other than drugs, Baylor and Branch Davidians,” Katie Beaird tweeted. A fan (perhaps hoping to piggyback on the restaurant’s buzz) has even written and recorded a theme song for the restaurant, with the chorus: “Fat Ho Burgers, juicy as they want to be/Fat Ho Burgers, one bite will set you free.” 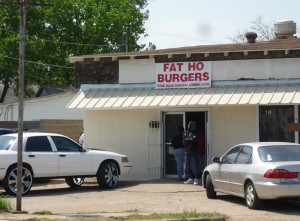 Two Baylor freshman made the trek from campus to the restaurant after hearing about it on the news. The pair braved the lunch rush Monday, when they patiently waited over an hour for their food.

Both admitted they were intrigued by the name. “I’m sure the name was a shock to some of the people in the community,” said Thomas Gibbons, 19. “It’s smart though—it’s packed.” Native Houstonian George Strake, 19, joked about the lack of dining options in town. “It’s always exciting when there’s a new restaurant in Waco,” he said. “It’s amazing what a name can do,” Strake said of Fat Ho’s busy first week.

But while the name will get you in the door, the food won’t necessarily keep you coming back. “Supa Fly Ho with Cheese” was not especially juicy—or fatty, as the restaurant’s name would suggest—and the patty itself was almost charred. Strake said while his Ho burger wasn’t amazing, he preferred it to the fare at Health Camp, Waco’s other cheekily named burger joint.

Evans’ offerings are unlikely to score her a spot on TEXAS MONTHLY’s 50 best burgers list unless her cooking catches up to her marketing acumen. In the meantime, she can cash in on the name’s shock value. Both Baylor students happily chirped that they’d buy Fat Ho T-shirts if the restaurant were to sell them.

I always found the “moral” critique of the restaurant to be an interesting one. I mean, we’re a capitalist society, right? And realistically speaking, a capitalist society is only as “moral” as its buying public. That’s why “Fat Ho Burgers” can flourish next to a “Gospel Cafe” that serves meals to the homeless. If it isn’t sacred to the people of/near Waco, then someone’s gonna use it to make money.

And while the “double standard” question – would this be funny if a Black man or non-Black person did this? – is an interesting one, I don’t know that I’d be ashamed of my answer. It’s the equivalent of “Bitch Cafe” to me. The person behind the restaurant had better have a damned good answer of why they’re misappropriating such a loaded term, and their answer had better be believable.

Lastly, that Ho up there? He does not look Supa Fly. It looks like a bun made of enriched flour; I can’t tell what’s going on with that meat and, although I don’t eat beef, I spent enough time working in restaurants to be able to identify the quality of the food I’m looking at; those fries look a little less than appetizing and that looks like a slice of processed cheese food product. I was hoping she could do much better – and she still can – but right now, Clean is something that that Ho up there… is not.

I’m still proud of her, buuuut… I reserve my financial support for restaurants that serve quality products. Here’s hoping that she’ll get there someday.

Q&A Thursday: How Can We Support BGG2WL?

Friday 5: 5 Reasons to Give Up Processed Foods

Sorry, the place looks like a dump and I wouldn’t even touch that place. The food looks horrible. The name is horrible, the place looks horrible. I am all for capitalist ventures and going into business, but the Fat Ho Burger was a bad idea. IMO. At the very least, I am hoping that she’d make the place look a little more respectable. It takes money to do that, I realize. So who knows? Hopefully she can use this as a stepping stone to bigger and better things.

Sad to say based on everything presented here this doesn’t look like it has staying power. A McDonald’s meal looks better than that pic *bleck* well with that said maybe there’s hope for her after all.

And while the “double standard” question – would this be funny if a Black man or non-Black person did this? – is an interesting one, I don’t know that I’d be ashamed of my answer. It’s the equivalent of “Bitch Cafe” to me. The person behind the restaurant had better have a damned good answer of why they’re misappropriating such a loaded term, and their answer had better be believable.

My concern is that it shouldn’t really matter who appropriates something as loaded as “Fat Ho.” If it’s not good for the goose, it shouldn’t be good for the gander. I’m not a betting woman, but I would bet money that all kinds of protests would be flying if it was a non-black person or a black man as the owner. Lakita doesn’t appear to have a reasonable explanation other than she thought it was funny. So……if a customer, in jest, calls her or one of her female staff “a fat ho,” she’ll think it’s funny? I don’t know, maybe she will. It’s not about a moral argument so much as a “consider your brand” argument, for me.

Ultimately, I feel, in this context, the quality of her food doesn’t matter (and the quality may have been impacted by the unexpected press she’s received, resulting in more customers than she bargained for this soon). While I can respect her hustle, that she chose such a name is not a good look. The good thing is that she’s young, can learn and grow, and if she maintains an entrepreneurial spirit, there’s no telling what else she can do, even if the restaurant doesn’t last.

I don’t understand why there would be protests if a non-black owned this restaurant….Are we to assume that if a Caucasion woman, or an Indian woman, or a Spanish opened a restaurant called “Fat Ho” that they’re automatically degrading black women? Is the term “ho” synonymous to black women today like nigger was to our race 60 years ago? So, if for some reason, I’m walking down the street with a white prositute and somebody yells out “Hey, Ho!” does that mean their speaking to me because I’m a black woman? Anybody feel what I’m saying? Regardless of the proprietor’s race, the name is tacky and tastelss. ALL women should hold themselves to a higher standard!

It’s not a dump it’s a small local place. I’m proud of her for doing her. Saying that. I have heard nothing but bad reviews about the food especially the burgers. If you are reading this Lakita, PLEASE, if you want to still be open years from now do something special with your burgers. The name alone is not going to cut it. Your food has to be good also. Waco has too many really good local burgers for you to come with burnt pre-cut patties and think you can make it.
Also George is very wrong about the lack of dining options in Waco, if nothing else you will find good food in Waco.

Sorry Local Wacoan, but I beg to differ about the quality dining options in Waco. I am a vegetarian and believe me this city leaves much to be desired. Sure there are a lot of mom and pop stores offering food. But with respect to quality and variety, nothing could be further from the truth. Hardly any vegetarian options, no Indian restaurants, no Mexican food (other than Tex-Mex), or other ethnic options.

“I knew the name would put a smile on people’s faces, so I just did it.”

No, ma’am.. no. I can’t remember ANY woman “smiling”, including myself (Yes, I’ve been called this) because she was called a “Fat Ho”.

This in my opinion is a fail.

Looks more like Busted Ho. And I doubt this woman’s objective is to do more than open a sub-standard burger shack with controversial name.

Nope, I will never support a business with such a degrading name, I don’t care what they’re selling. And I refuse to pat her on the back for opening a business when she took the easiest route to getting attention for her business: an offensive, sensationalistic name rather then a well-made, quality product.