In the midst of a busy weekend, I caught a glimpse of a story that hit me with a case of PTSD, and I’m sure I’m not the only one:

Playboy’s Playmate of 2015 has exposed her ugly side with a naked picture — and it wasn’t even of herself.

Dani Mathers faced unrelenting criticism on Thursday after she cruelly shared a photo of a naked unsuspecting woman showering at her gym, mocking the woman’s body.

“If I can’t unsee this then you can’t either,” she captioned the post taken at an L.A. Fitness gym.

She also added a photo of herself laughing at the vulnerable woman, whose nude body has now circulated across the internet. [source]

After being dragged internationally Mathers issues The Standard Apology, simultaneously claiming “I understand fully the magnitude of this post that I have hurt a lot of people, women. Body shaming is not okay…and not something to joke about,” and “That photo was taken to be a personal conversation with a girlfriend” in a video. Mathers apparently is unaware that if she truly believed body shaming is “not okay” and “not something to joke about,” then she wouldn’t be doing it in a “personal conversation with a girlfriend.”

I remember when I first joined a gym. It was a small 24-hour facility that had two full-service bathrooms. No stalls, no giant lockers, none of it. Each bathroom was for both genders and each had their own showers, counters, toilets, and even offered light toiletries for those who might’ve been missing their own. I couldn’t bring myself to use it, but I appreciated the way it kept me from feeling like I was re-entering the Phys. Ed. locker rooms in high school all over again.

When I moved to NYC, I joined a gym in the middle of Manhattan (unsurprisingly, the gym that was caught giving people membership prices based on their body size.) I wanted to train under the best trainers in the city—not just for myself, but so I could learn what “good training” looked like. It was expensive, but I learned a lot.

The reason I mention the expense, is because I expected something like what I received at the tiny little 24-hour gym I had back in Indiana, but on a larger scale. Instead, it was a room flush with mirrors everywhere, full of lockers, seats, blow dryers, benches, big-screen TVs and open showers.

Now, I won’t lie and say I have always been a confident woman, but during my time at this gym, I was more confident and comfortable than I’d ever been to that point. That doesn’t change the fact that the locker room of a gym—especially the most expensive ones—is engineered to breed the kind of insecurity and narcissism that people will either succumb to or feed on, the kind on display in Mathers’ photo. 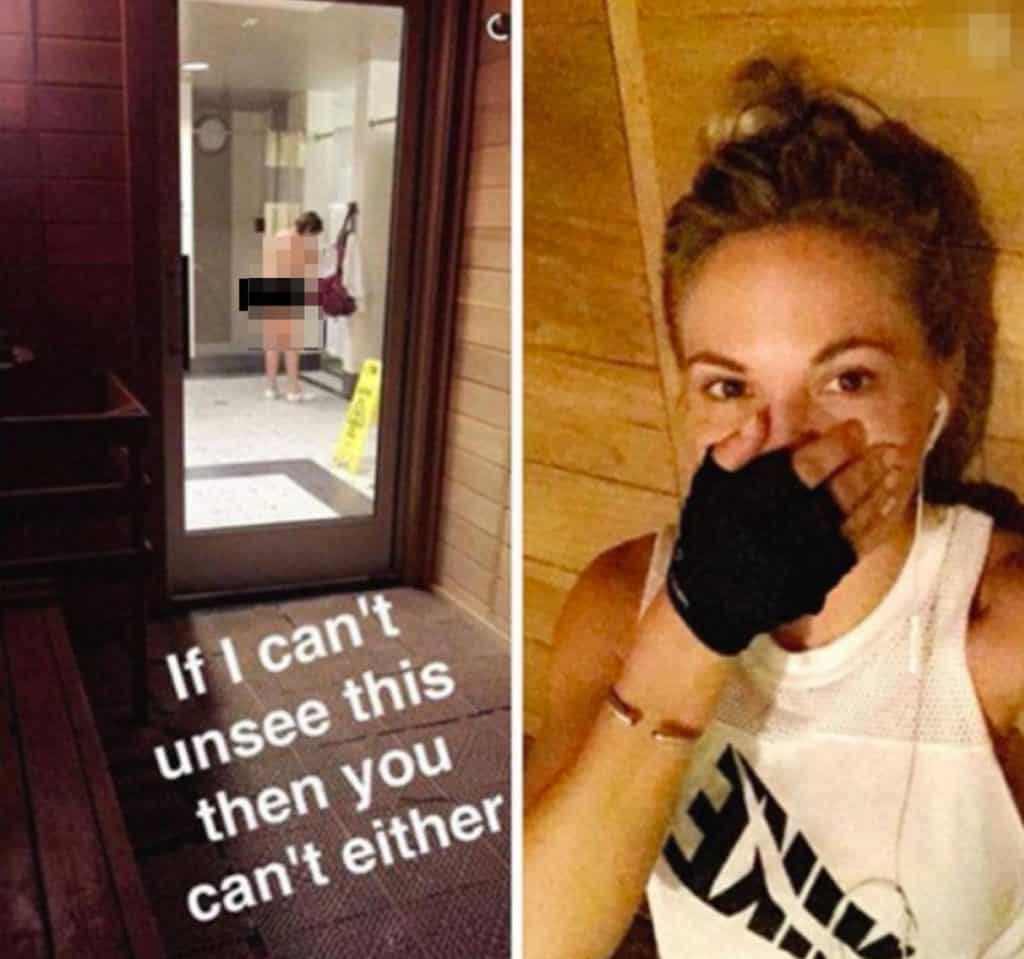 No one is immune to it, either. Gym locker rooms provide little space for privacy, encouraging members to tend to their personal hygiene in front of complete strangers with whom they share no bond, often in the nude. Sure, you can wait for a bathroom stall to undress and change in if you like, or you can do some strategic towel work and build a little fort with towels and locker room doors, but someone is always looking. Someone is always watching. Even when they aren’t, you always feel like they are.

The mirrors create a space where you are constantly looking at yourself, constantly assessing yourself, seeing your body and how it looks in multiple positions… and doing it while other bodies in various states of undress are in the background. It also creates a situation where people—people you don’t know to be good, decent people—can see your body and size you up or use you as cannon fodder.

Lots of people join gyms because they’re unhappy with their bodies and want to change. They’re there to work, perhaps be inspired, learn some new tips and techniques, and maybe make friends. It’s already a vulnerable position to be in to admit that you’re unhappy with your body. Imagine the kind of fear you’d feel, being naked in front of strangers with a body you’re not comfortable in. The mirrors and shared close quarters create the kind of access that leaves people open to judgment by strangers and, ultimately, the careless and thoughtless treatment Mathers gave her victim.

I get sooo many e-mails from people terrified to join gyms because they just know that there’s some loser who doesn’t have enough business of their own to mind, who’ll mock them or shame them for their size, or make them feel like idiots because they aren’t as fluent in the art of the deadlift as they are. How can I tell them to just pretend those people don’t exist, encouraging them to see the potential for positivity, when a Playmate of the Year is making the news for being this same kind of scumbag? Every single one of us who has apprehensively joined a gym immediately saw a piece of ourselves in the person in the background. And we were horrified by what we felt seeing that.

Mathers’ behavior reflected the worst of gym environments. She was the Alpha Dog, the person who walks around making jokes out of people. The person who finds your body ‘funny.’ But you know what? Virtually every gym has one of those Alpha Dog Assholes, and I’m not convinced that it’s not by design.

A month or so ago, Well + Good posted an essay asking “Why aren’t more gyms and fitness trainers embracing body positivity?” In far too many cases, it’s built into the business plan. Seeing as how research has shown that negative body image is what motivates so many to get moving to begin with, why wouldn’t a gym encourage that negativity—deliberately or not—if it meant keeping their business running?

I’ll tell you why they shouldn’t: because you shouldn’t need to break a person down to the nothingness in order to build them up with strength, pride, and power. You shouldn’t need to create and encourage a negative body image in a person in order to position yourself and your service as the path to change. You know why? Because once you create that kind of negativity in a person, it never goes away. Once you encourage that need to compare yourself to others, constantly body snarking others, the condescending demeanor, the nitpicking…getting “the perfect body” doesn’t change that. It never would’ve changed that.

Since this horrible woman has forced my hand, let’s face it: there are some cruel and inhumane people in this world, and unfortunately you are likely to meet at least one or two of them at the gym. Believe it or not, it’s not very different from bullies in the world outside of your gym—they thrive on their ability to point out how different you are from them, positing themselves as the ideal and you as the joke, and take advantage of it. They need you in order to feel like they’re the ideal. Their lives are often so empty, the only redeeming quality they have is a socially-acceptable body, and they have to constantly remind themselves of that in order to experience joy. That’s not your fault, nor is it your responsibility.

Don’t let fear control your actions. Don’t let the potential for negativity impact the choices you make. Jerks like this exist everywhere—on the train, in line at the grocery store, anywhere—not just the gym, and none of that changes the fact that you’ve still got a goal to achieve. It’s not about pretending they’re not there, it’s about focusing on what’s important to you: getting in, getting it done, and getting the hell out of there.

You may not be a Playmate of the Year, but you’re also not the kind of jerk who uses the locker room as a space to make others feel less than, or put a woman on display without her knowledge. And, in my book, that definitely counts for something.

Q&A Wednesday: We All Fall Off the Wagon, Including Me

Q&A Thursday: Do I HAVE to Give Up Carbs?

Folks demand fat people go to the gym, and when we do, we are subject to hatred, ridicule and people posting our images on the Internet to make fun of us.

We cannot win. Nothing fat people do is okay in this world. People don’t care about the health of fat people. They care only about making our bodies disappear by any means necessary.

And watch how many fitness heads agree with this woman, watch how only certain bodies and certain voices will be central to this convo (hint, it won’t be fat positive activists who have been fighting this for decades. It will be skinny people and fitness people who hate our fat bodies.)

I love your blog Erika. This exact issue kept me from going to a gym for decades. The gym culture kept me feeling insecure and horrible about not only my body, but ME as well. What ended up working for me is the YMCA. They have wonderful equipment without that typical gym environment. People are there to work out, not to look at other people. Most of the clientele are far older than me, but that works well for me too. You are so spot on with your blog. I think you have the best nutrition/weight loss/fitness blog out there. Thank you for what you do.

I am new to your blog, but I am already impressed by your writing. Thank you for observing the way that our gym culture works and our culture at large. It is such a trap for those who are already at a disadvantage.