Diet Drinks Bad For Your Heart?

Seen on The Today Show this morning: 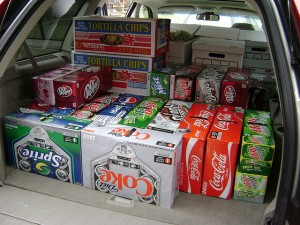 Just as you were starting to feel virtuous for having switched from sugary sodas to low- or no-calorie substitutes, a new study comes along suggesting that diet sodas might be bad for your head and your heart.

The study, which followed more than 2,500 New Yorkers for nine or more years, found that people who drank diet soda every day had a 61 percent higher risk of vascular events, including stroke and heart attack, than those who completely eschewed the diet drinks, according to researchers who presented their results today at the American Stroke Association’s International Stroke Conference in Los Angeles.

Still, the researchers aren’t ready to tell consumers to skip diet sodas. More studies need to be done before that happens, said the report’s lead author Hannah Gardener, an epidemiologist at the University of Miami Miller School of Medicine.

“I think diet soda drinkers need to stay tuned,” Gardener said. “I don’t think that anyone should be changing their behaviors based on one study. Hopefully this will motivate other researchers to do more studies.”

That advice may not stop some from skipping their diet drinks. “This is pretty scary,” said Denise Gainey, a 49-year-old administrative assistant from Amelia, Va. Worried that she might have inherited a higher risk of heart disease, Gainey wants to be careful. “I guess I’ll just be drinking a lot more water,” she said.

For the new study, researchers surveyed 2,564 north Manhattan residents about their eating behaviors, exercise habits, as well as cigarette and alcohol consumption. The study volunteers were also given physical check-ups that included blood pressure measurements and blood tests for cholesterol and other factors that might affect the risk for heart attack and stroke.

The increased likelihood of vascular events remained even after Gardener and her colleagues accounted for risk factors, such as smoking, high blood pressure and high cholesterol levels. Pointing the finger more squarely at diet drinks, the researchers found no increased risk among people who drank regular soda.

Does this mean there’s something in diet sodas that hurts our blood vessels? Nobody knows the answer to that question, yet, Gardener said. There could be something else that people who drink diet sodas have in common, she explained.

For example, it’s possible that people who drink diet sodas are replacing those saved sugar calories with other unhealthy choices, Gardener said.

That explanation makes a lot of sense to Dr. Nehal N. Mehta, director of inflammatory risk cardiology at the University of Pennsylvania. Although the researchers know the total calories study volunteers were consuming, they weren’t able to account for unhealthy eating habits, Mehta said.

“Maybe along with the diet soda, people are grabbing a Big Mac and a large fries,” Mehta said. “Soda may not be the villain. It may be the other things people consume in association with diet soda. After all, what goes better with pizza or fries than a soda?”

That said, it is always possible that there is something about diet soda that leads to vascular problems, Mehta said, adding that this is the second study to associate diet soda with health issues. An earlier study found that diet soda consumption was linked to an increased risk of metabolic syndrome, which is also a risk factor for heart problems and stroke.

Further, Mehta said, there are animal studies suggesting a link between vascular problems and caramel-containing products. Among other things, caramel is the ingredient that gives the dark color to sodas like Coke and Pepsi, he explained.

Despite all of that, you probably don’t want to give up diet soda until — and if — larger studies confirm the results of this one, Mehta said.

That is, unless you’re someone with a lot of risk factors for stroke or heart disease, said Dr. Tudor Jovin, an associate professor of neurology and medicine and director of the Stroke Institute at the University of Pittsburgh Medical Center.

So, in other words… this edible substance, completely devoid of any nutritional benefit… not only cannot provide you with any nourishment or improve your health, but actually may have the ability to cause you harm by way of those heinous chemicals listed in the ingredients?

We knew this already, right?

But what’s so bizarre to me, really, is the fact that nooooooooooooooobody in the video wanted to just come out and say it: leave the damn chemicals alone!

I’ll be writing my thoughts on this up a little later… but for now, what are yours?

Q&A Wednesday: How Do I Work Out While I’m Injured?

So my initial reaction to this isn’t suitable for public viewing! Once I calmed down, however, my not-so-inner researcher/scientist kicked in and I realized that I need to see this study in order to make a properly informed decision. I’ve read too many studies where the title is SO promising and then you look at the results and its like, “Um…yea no!”

However that is not to say I don’t think diet sodas are bad for you (isn’t this common sense by now?!) just that my thoughts on this study need to be validated by the actual results.

Either way, I would err on the side of caution both as an individual and a researcher and say that YES you should give up your soda based on a handful of studies because IF it is the soda you are NOT going to be happy that the researchers said it was ok, that we needed more info, etc when it comes to kick you in the booty later.

I’m with you, and that’s why I’m going to have to post my thoughts separately. There’s a hint of “causation and correlation are equal” here that makes me uncomfy… but I want to follow this simply because I’m interested in how far down the rabbit hole this entire fight is going to go.

I said a LONG time ago that because the ingredients and their origins and what they can do in our bodies is STILL unknown (as said in the video clip), we shouldn’t be eating it. To me and MY beliefs, this study is pretty inconsequential. ROFL

I gave up soda many moons ago & never understood diet soda. My favorite connection (and I’m being sarcastic here) diet caffeine free soda. So there’s no real (and by real I mean HFCS) sugar AND there’s no caffeine?? And you’re drinking it for what?

I don’t need a separate study to tell me that these fake sugary drinks are not only NOT helpful to my health but possibly harmful. We all really need to retrain our taste buds. Our taste buds have led us down a dangerous path.

MAN! When I used to wait tables in undergrad, I remember people asking for diet caffeine free soda. I was like ROFL ARE YOU SERIOUS?

I mean, seriously – do they still sell THAT? LMAO!

I first gave up regular soda, and now I will be completely giving up diet soda. I guess it’s true the only safe thing to drink is water!

I haven’t drank soda for nearly 24 years, don’t miss it.

I don’t think sodas are all that bad, the problem is that people drink them all the time, at every meal. When I was a kid I was only allowed soda in the afternoon, for lunch. Today I see people drinking soda at 7am in the morning and for some reason that grosses me out.

First of all I want to say thanks for posting this informative article. Secondly I think anything can be seen as harmful in excess. Personally if I want a soda I am just going to have a soda bc a diet soda is just as bad just in a different way.

“Anything can be seen as harmful in excess.”

This is so untrue that it’s silly. Here’s hoping you don’t “want a soda.”

I wonder why more people don’t drink beverages like Clearly Canadian? It tastes good, it’s made with real sugar and it seems like a good replacement for pop. I don’t know how healthy it is, but it seems like the lesser of all the evils.

Ever since my old classmate – who works in a dialysis clinic – gave me her lecture about the evils of pop and phosphoric acid, I’ve ALWAYS thought Clearly Canadian was the “smart” choice. But when I just read your comment my exact thought was “Dang, why she gotta bust me out?” I guess at the end of the day, you’re right, it is just empty calories.

*going to drink some water*

I gave up regular soda a year ago, and thought diet soda was a better choice, I was on board until my pregnancy…for some reason this baby will not allow me to drink regular or diet soda, sooo soda has been off the grocery list for a while now, strictly water!
SN: While having lunch w/ my 2 year old daughter, I ordered water for the both of us, the waiter thought it would be a good gesture to bring me water and my daughter HI-C juice, and with a wink said “it’s on me”….I wanted to throw the juice in his face, I DON’T WANT YOUR HFCS!! I politely gave it back, and requested WATER again. Why do ppl assume every kid drinks juice/soda…

My chemistry teacher told me that the chemicals in diet and decaf drinks cause cancer. After that I was in shock.

Every since I’ve followed your blog my body has been screaming at me to give up diet and regular soda. I listened to it. I can’t consciously put chemicals and acids in my body and then ask God to heal me when I get sick from it. I’m not a walking picture of health but I’m slowly making changes for the better. This is the only temple I have.