For some reason, I woke up and said “I want potatoes.”

And, so went my search and destroy mission. I got dressed, left everyone behind, and – at 7AM – went to procure potatoes.

When I finally returned home…it was time to put in work. 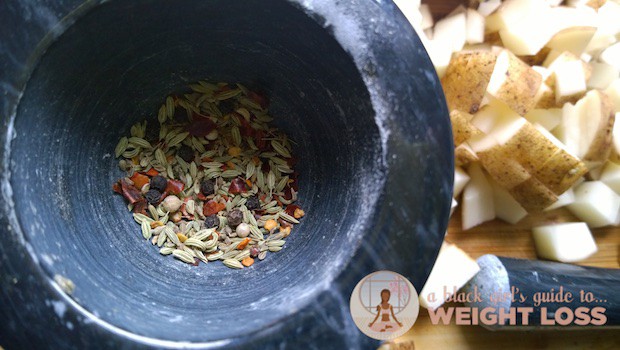 Your first step is to preheat your oven to 450 degrees. Get a large pot going full of water, and bring it to a boil. Inside of that pot, you’re going to put a large amount of salt – about 4 tablespoons – as well as a pinch of black peppercorns, crushed red pepper flakes, fennel seeds, and anise seeds and drop it in the water.

For the record, if you don’t have all of that, don’t sweat it. They’re inexpensive spices available at just about any store, but if you want your potatoes now and not after you procure these weird random spices – spices which, by the way, will totally rock your tongue – then keep this in mind: the goal is to add some flavor to the water, so that the water doesn’t just taste like water when you boil your potatoes in it. When you boil your peppercorns, or whatever have you, it changes the flavor of the water, and when the water cooks the inside of the potato cubes, it gives it a light flavor.

The salt by itself is enough to get the job done pretty well, but for something a little more remarkable, add some spice to the pot and get your life.

On to the next one. 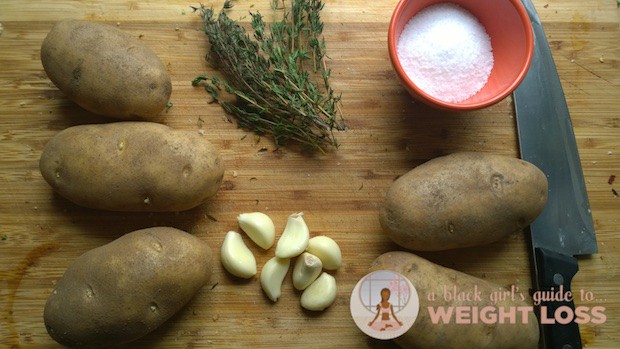 ingredients for this particular recipe

Five potatoes, 7 cloves of garlic, an obscene amount of rosemary, and salt. Time to cut those potatoes.

When you cut your potatoes for a recipe like this, you want to get chunks that are as close to equal in size as possible. Sizes that are too small will burn quickly and easily; pieces that are too large will be undercooked and annoying. We want as even a browning process in the end as possible. 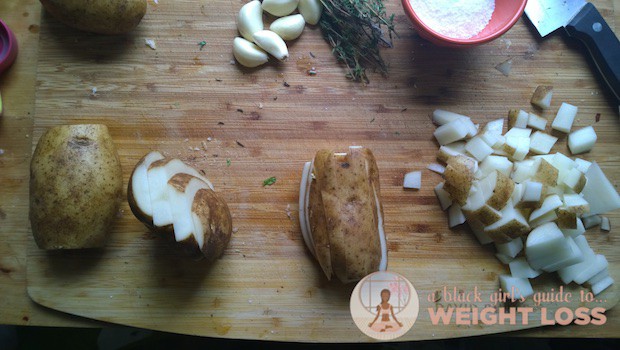 There are four steps to cutting your potatoes. The first, is to cut off a sliver of the ends, so that you can stand your potato up without it rocking from one side to the other. 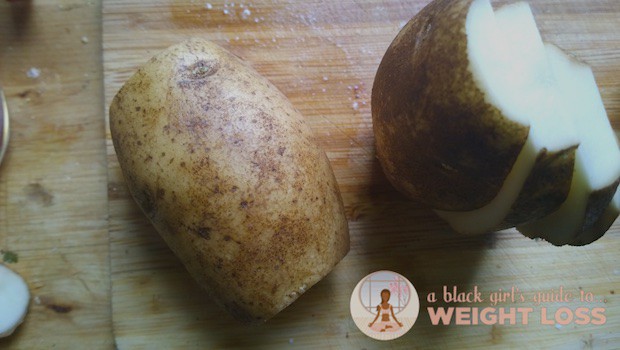 here, you see the cuts made on each end of your potato!

If you take a look here, you see that I cut a thin sliver off the edges of the potato, making it easy to stand it up for the next step… 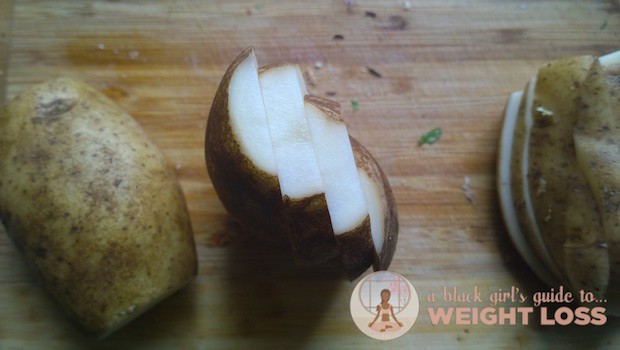 stand the potato up, and slice it into four long pieces

…which is where you make your second set of cuts into your potato. You’ll want to slice through the potato enough times – usually four, maybe more or less depending on the size of your potato – so that you get reasonably similar slices. Then… 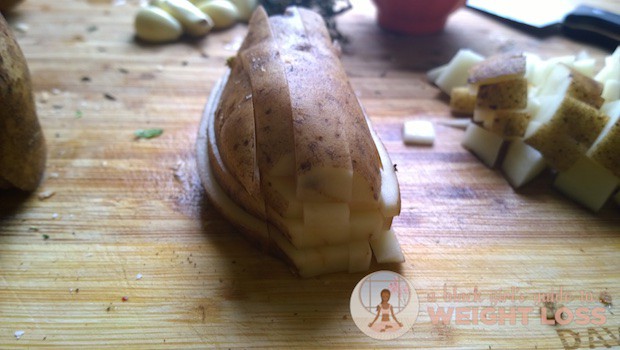 lay your slices down, one on top of the other, and slice the long way!

you’ll want to lay your slices down, using your fingertips to balance them on top of one another, and very carefully cut through the stack of slices so that you have what, essentially, looks like fries. 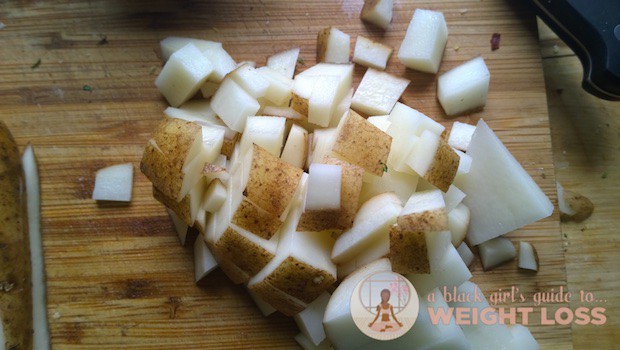 get your dice on!

Dice away! Carefully holding the stack of fries, cut across them in evenly-sized chunks until you get a giant mass of raw potato cubes.

Now hurry up and chop the rest before the potatoes oxidize and begin to turn brown.

By the time you finish those potatoes, your entire kitchen should be smelling like awesome. Yes, awesome has a smell. 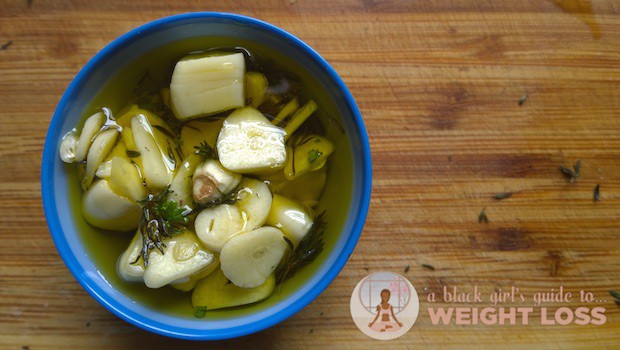 garlic and thyme diced up and soaking in olive oil

While your potatoes are boiling, take your thyme and garlic, dice ’em up, and soak them in two tablespoons of extra virgin olive oil, and let them sit near the stove. The heat will make the herbs and garlic give a little flavor to the oil, so when you eventually use it, it’ll spread nicely across the pan. 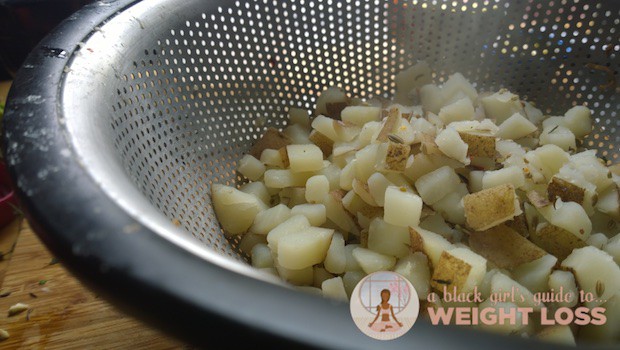 potatoes drying in the colander

Once they’ve cooked through for ten minutes, grab a fork and spear one of your potatoes. Let it cool, and then take a bite – is it soft and creamy on the inside, like mashed potatoes? If not, give it a few more minutes and then taste test them again. If so, drain your pot by pouring your potatoes into a colander (a colander is the safest way to drain things you’re boiling), and let them sit while you grab your baking sheet, where you’ll spread all your potatoes out across the pan. 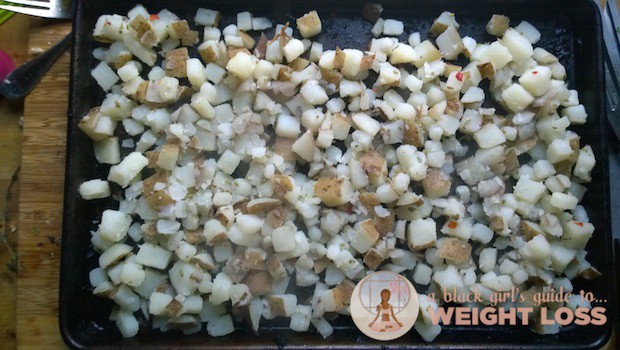 Spread them out, and slide them in the oven. You’ll want your potatoes to be in the skillet for about 20 minutes. 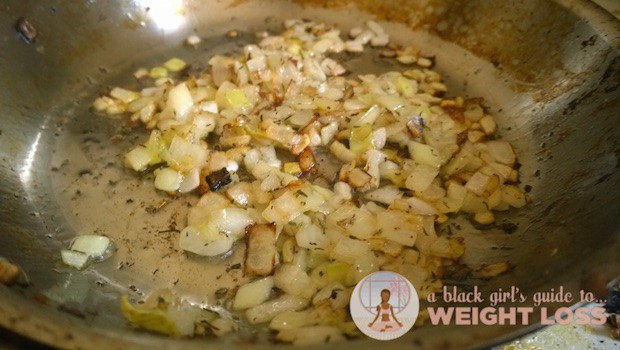 onions and garlic, looking a little browner than you might otherwise want for yours

In the meantime, pour your garlic and thyme oil in your skillet while it’s still cold, and let it heat up with those aromatics in the skillet. You always want to try to avoid putting fresh garlic in a hot skillet or it’ll burn, so put it in there when the skillet’s cold, and then turn the skillet up to medium-low heat while it’s there. Once the skillet starts to sizzle, drop your onion in there and let it soften. Once the onion starts to look a little bit more see-through (also known as ‘translucent’), you’re good to go. 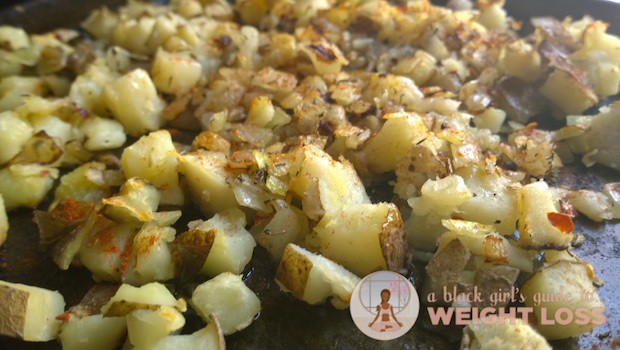 After about 20 minutes, you should get something looking pretty close to this. Take a bite of one of your chunks – it should have a light crisp to it. You’re in the home stretch, now.

Drop your onion and garlic mixture into the baking sheet, oil and all, and – with a big spoon – mix all of your potatoes and onions together, and even add a little cayenne – a little – at this point if you like. Spread it back out on the baking sheet and slide it back into the oven. Give it another 10 minutes. You should be good! If not, let it roast a little more.

Now, because of #babysprout, my potato craving was very particular. My potato craving said eggs, blue cheese, cayenne, potatoes, and thyme. So, that’s what I gave it. Willingly. 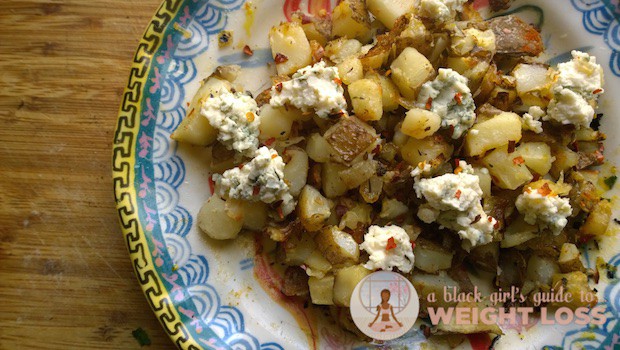 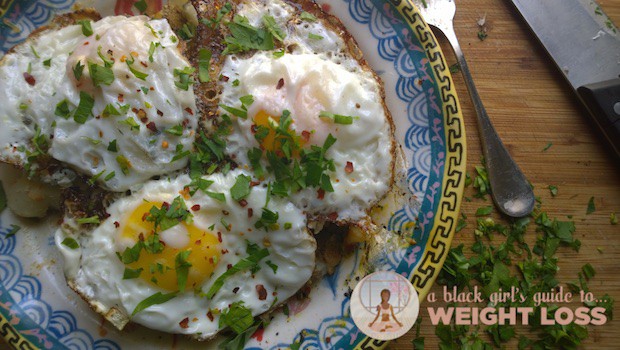 …with a little chopped parsley over the top? 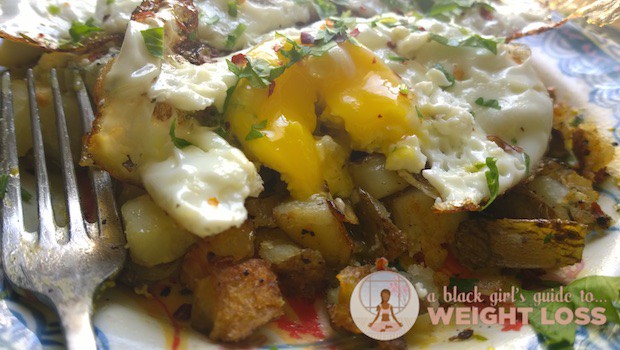 What makes this recipe so healthy, Erika?

For starters, those of us who are endurance athletes know the virtues of potatoes. Full of antioxidants and that much-needed potassium, if you run in the right places, it’s highly likely you’ll run into a runner with a bottle of water in one hand, and a baked potato in the other.

Secondly, if you’re in the mood for crisp potatoes and you’re ambivalent about the frying process, this gives you the option to enjoy potatoes without the added oil. I’m not opposed to frying – that is, with the right oils and the right products – but I also know that I can’t take all the oil that comes with fried food, even in mild portions. (Although, it must be noted that this boiling-before-you-bake technique has been known to also work with frying, too; simply boil and drain the potatoes before you fry them, and you get much more crisp potatoes without the extra grease.)

Lastly, since you don’t need the fat to get the crunch, a recipe with a bit less oil involved saves money and reduces the calories without negatively affecting the flavor.

This is a pretty easy recipe, so the only troubleshooting issue I can think of is whether or not yours come out crispy or crisp enough to your liking. If you’re used to yours being crunchy all-the-way through, no fear! I tested that, too: 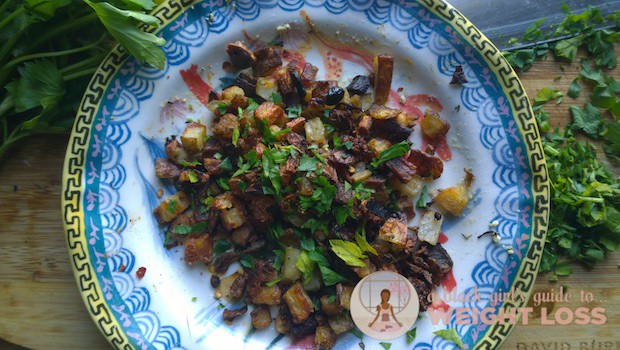 You might not want to pour your onions and garlic in until the last five minutes, but if you want yours to be ultra-crispy, then just extend the first baking period to 30 minutes instead of 20, and continue checking every five minutes from there on. Taking a bite of one of your larger chunks of potato will give you an idea of what you’re working with, here, in terms of time.

Now, if you’ll excuse me, I need to go cut some potatoes… because I’m hungry again. #pregnantlife #greedylife

That looks wonderful! My try it with sweet potatoes! Congrats on the pregnancy;-)