I’ve got a loved one who looooooves creamy soups… but can’t cook to save her life. I’m posting this for her, because I think she melted in my chair when she tasted this soup. 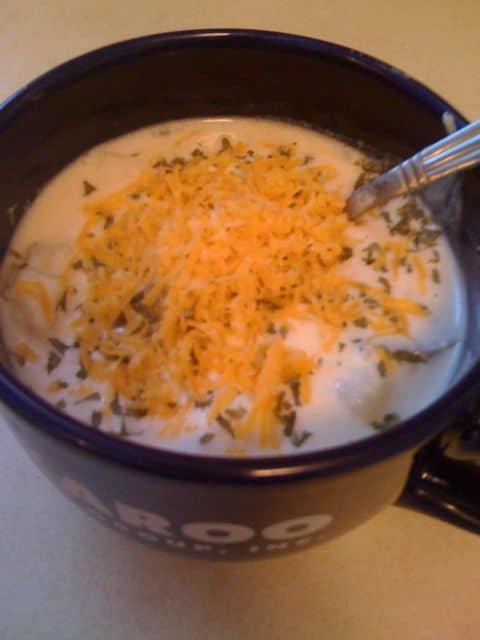 2 cups milk (as long as it isn’t skim milk, it doesn’t really matter what kind so long as it’s cow’s milk… a low-fat version is preferred, though) 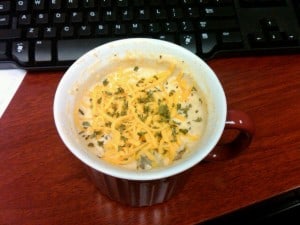 Photo sent in by @21dollface!

Pierce your potatoes with a fork. Place in large microwaveable dish, with 1/4th of a cup of water in the bottom of the dish. Microwave for 10 minutes. Once finished, slice in smaller pieces to allow potatoes to cool faster.

Pour your oil in your large saucepan, and toss your onions inside alone for 3 minutes, then add your chicken broth. In another bowl, combine 1/2 cup of milk with your flour, and whisk until blended. Pour this into the broth and onion mixture, then add the rest of the milk and bring it to a boil. Pull it from the heat, then pour in your sour cream and seasonings. Mix in half of your cheese.

Take your potatoes – they should be cool by now – and chop them up into fat but small chunks. Leave the skin on – added fiber! Toss them into the pot, and with the back of a large spoon, mash the potato chunks up against the insides of the pot. It doesn’t have to be every potato chunk, and it doesn’t have to be perfect. Stir up your soup, and ta-da! Finished. Serves approximately 4, while using the remaining cheese and a little parsley to garnish your dish!

PS: Now, I’m #teamANTIbacon, but if you added a little turkey bacon to this recipe… I wouldn’t be mad at you!

The “Nomadic Night” Print Sports Bra and Matching Tights from @NikeWomen: Do We Love It?

Fitness Tracking Tools: 7 Days With the Jawbone UP, What Does A Day’s Worth Of Data Look Like?

This looks good! I have GOT to get out the fear of cooking new things. Thanks.

I tried this recipe the other night and it ROCKED! My husband, the non-believer of all things healthy ate the most.

I made this last night. I cooked some bacon, let it cool, placed it in ziplock bag and crunched it up. I added natures seasoning, a tad more salt, and garlic powder to the recipe and garnished the soup with parsley, cheese and bacon. It was delicious and my boyfriend tore it up!

I really like this but every time I make this my leftovers turn solid! It turns from soup to mashed potatoes lol Should I use less potatoes?

Try putting it in a covered pot on super low heat. That’s what I usually do with these thick kinds of soups.

Looks delicious. I loved the recipe. Thank you for sharing this. I’ll try this soon.