Home Friday 5 Friday 5: Five Ways To Switch Up Your Workout And Bust Through A Plateau

Friday 5: Five Ways To Switch Up Your Workout And Bust Through A Plateau 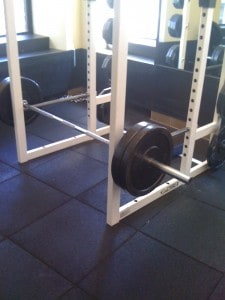 Life tries to hand me a plateau? I answer with... two giant plates on either side of my weights, baby. That's right.

Weight loss plateaus happen to the best of us. They’re supposed to – you commit your time, energy and body to one strict workout on a consistent basis, and the body builds, molds and reshapes itself as a means of adapting to this new set of conditions it’s thrown into on this regular basis. It makes sense.

It also can make you a bit rage-y. Yes, I made that up.

Because your body is constantly changing – hopefully losing fat and building muscle – and the pounds keep melting, your ability to burn calories is continuously decreasing. A person who weighs 200lbs might burn 180 calories jogging a 13 minute mile, while a person who weighs 140 might only burn 130 in the same conditions. During a four-mile run, that’s 200 calories worth of difference, and after a while, it can start to hurt. Let’s face it: plateaus can be a bit demoralizing.

Sure, you have to change your eating habits, but you also have to adjust your workout, too. Lots of people think “adjust your workout” means things like give up what you might’ve grown to love – like a special Zumba class or a body sculpt session – for something completely dreadful – like, say, lifting weights – but… I’ve got something to tell you: you don’t have to give up anything.

With these five quick tips, you’ll be able to manipulate just about any workout you’ve got, and bust through that plateau like nobody’s business:

And, no, I don’t necessarily mean in the sense that you need to be lifting hundred-pounders, but you do need to be adding some ..er, more weight to your routine.

Developing muscle (and maintaining it) actually increases your metabolism, because muscle carried on the body burns somewhere around three times as many calories as fat carried on the body. This means that you burn through calories quicker in both your workouts and in your day to day lives, which also means you can eat more without the fear of gaining fat. (I hope this also sheds light on the weirdness with people’s obsessions with telling women to lose weight, diet and be thin… but discouraging them from lifting weights to actually accomplish that long-term.)

It doesn’t have to simply be you grabbing some dumbbells, though. You can wear ankle and wrist weights, carry heavy backpacks or weighted vests, or even – yes, I lied a bit – carry dumbbells when you walk or run. Ankle weights can tone your legs as you run – the lifting of a much heavier leg can serve as a challenge to your quads and calves, providing a little thickening action there – and weights in your wrist/hands can work your arms out as well. You can sneak in some ankle weights during your fitness classes or even during your regular day. You’ll be worn the hell out and even a bit sore, but you’ve also got to take some time to figure out what conbination works best for you to break through the plateau.

2) Add more reps. Sometimes, when you’re nearing the end of a set, eeking out that last two or three sets will really push you over the edge. So, just when you think you’re struggling… make yourself topple over. Put all the energy you’ve got into an extra one or two. Before you know it, you’ll be adding more reps to that.

3) Adjust your pace. Whenever we do our sets of an exercise, we tend to always do them at the same pace we’ve always been used to, and that’s okay… until we hit that plateau. Are you getting in those crunches so often that you can’t even feel the burn anymore? Try going faster – you’ll get a bit of a cardio burn out of it, too – and see if your body can handle that motion at a faster repetitive pace… or try going three times as slow and even holding your position in mid-crunch just to extend the amount of time your body has to commit to the exercise, thereby forcing the body to adapt by developing the ability to endure the activity for longer. Either option – speeding up or slowing it down – will help create that glorious burn we all look for.

4) Get in those “super sets” or “drop sets.” If we’re talking about dead lifts, here, a drop set looks something like the following:

…and that counts as one super set. You’d then repeat that super set three times or however many times you were going. You have to figure out which weights work best for you and at what count, but the 8/6/4 is a generally reliable number of reps.

Drop sets are similar in that you drop the weight, but you keep the number of reps the same.

5) Circuit training! Similar to super sets in that you’re counting a lot of similar – yet, different – actions as “one set,” circuit training is where you incorporate vastly different actions or exercises in one “circuit,” and that would count as one set. My old gym, when I first started out, kept a 30-second interval timer in bright lights near the lifting area so that you could know how long you’d spent on one machine. You could spend 30-seconds doing one of your favorite exercises, take the next 30 seconds to do your next favorite exercise, and run through your entire routine in this fashion until the end, and count that as one set. From there? You start over. See, also, both Tabatas method, Interval training and the Bodyrock.TV crew. All of which are successful ways interval and circuit training can kick your tushy.

What do you use to bust through a plateau? What’d I leave out? What are your experiences with what’s listed here?

Why I Rock The Red Pump

I agree with you! I currently follow the Beginner program from the book ‘You are Your Own Gym’. It utilizes all of those techniques and more: Supersets, Tabatas, Intervals, Ladders (Perform 1 rep of any exercise, rest, perform 2 reps, rest, perform 3 reps… Keep increasing your reps until going any higher would cause you to hit muscle failure on subsequent sets. Once you’ve reached that point, come back down without repeating
the highest number. The rest intervals are the time it just took you to perform your reps.) and Stappers. Stappers is doing a circuit for 20 minutes straight without stopping. Changing it up every week has kept my muscles growing.

This stupid plateau is a month old now and I’m sick of it. I thought I had changed my routine but so far nothing is making it budge. So frustrating! Especially when people say you look like you’ve lost and you know the scale hasn’t budged in a month!

I feel you, Belindia! My plateau lasted 365 days — I’m a Zumba instructor, so I assumed if I increased the amount I taught I’d lose more –> SIKE! Keep doing what you do! Don’t get discouraged!

Thank you for blogging, Erika!

And yea everyday i can feel muscle failure even during workout. That playeau went out.

I’m there now. So this is right on time. Stupid plateau! *arms crossed*

I just picked up the book You are your own gym. Any tips or advice? I’m excited to get started

I don’t know of a track coach worth his or her salt that would recommend running in ankle weights. Very good way to injure yourself. As far as lifting- I’m with you. Bench pressing your body weight and deadlifting twice your body weight are great goals to shoot for after being trained to do the lifts correctly.

I’m not sure that a track coach would have a legitimate reason to ever suggest ankle weights, when a track coach’s goals are far different from someone who’s focused on a fat burning goal, especially when someone with a fat burning goal is going to train much differently from someone who legitimately treats running as a sport, you know? In instances like this, what’s appropriate in one space wouldn’t be appropriate in another when it comes to training for specific goals, and we need to remember the importance of context.