I can’t be out here referring to the First Lady as a “fit chick,” man.

But still…a few months ago, the Fit First Lady hit the Heisman pose with a few Dallas Cowboys (yuck) players in this adorable aqua-colored skirt. I guess this really is the color this year, huh? 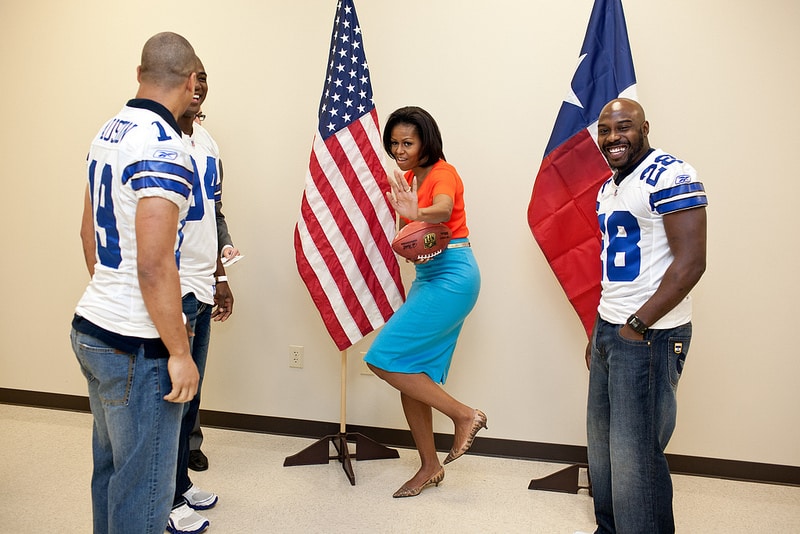 Those poor guys are totally beside themselves, right now. Look at the one on the right – I bet his face hurt later from all that ear-to-ear grinning.

Also got a couple of other photos from the event (mainly as an opportunity to post pictures of my secret love, favorite TV chef/personality, Tom Colicchio): 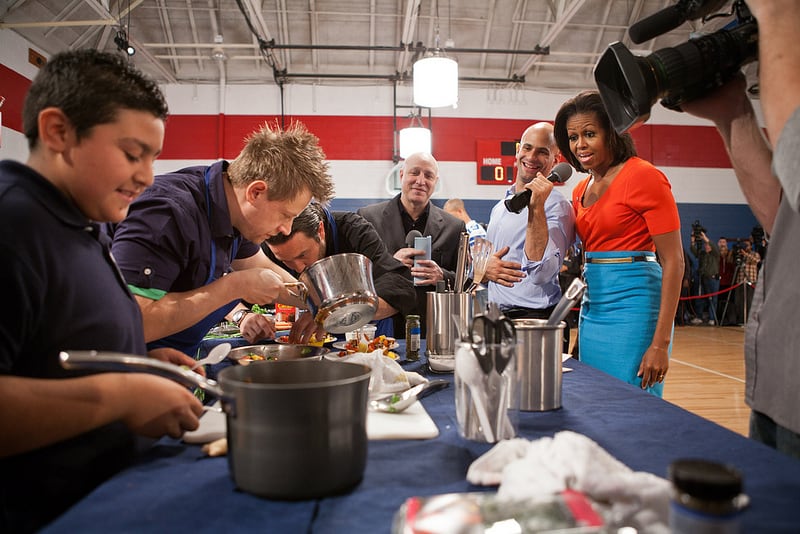 Listen. I’m trying to be on Madame First Lady’s level when I reach her age. I just… I love she.

The Problem With Genetically Modified Foods

That outfit is nicely colorblocked. I always adore this woman. There is NOTHING about her I don’t like. I would be crushed to find that she is a serial killer….

Love her too, the White House gardens were open to the public last weekend I would have loved to tour the White house kitchen garden *le sign*

Man y’all just don’t know. i have the biggest lady crush on Michelle. And yes, i refer to her as Michelle; not out of disrespect, but in my head we are best homies. She always looks so great. love her. Thats another thing i love about the Obamas: they smile. And the smiles look sooooo geniune. and they’re contagious. i find mysef just a cheesing whenever i see her making an appearance.

Amazing woman strong and not afraid to show her greatness. I would love to know how she deals with everything she is just a rock.

She stands tall in who she is, her convictions and comfortable being herself.

The First Lady is like concentrated awesomeness! I’m inspired by her in so many ways. She’s one of those people that makes you want to be the best person that you can be. And you know what… she’s a “chick” too.
I can totally see her and the Pres kicking back on Sunday watching the game in rival basketball jersies. Talking smack and everything. lol
She’s just that real and complete!

Why is she so fly?

Dude. I don’t know. I just hope it rubs off.

…excuse me for a few moments while i swoon…
Michelle Obama is the kind of strong, confident Black woman that i loooooooooong to be.

I guess we all have a “girl crush” on the lady. I am working on my Michelle arms and shoulders for next summer. My goal is to wear my first strapless dress and look good!

She is the first “First Lady” that has been just so…fantastic! Has anyone heard the interview of how they met? if you haven’t you should look it up! Lol i loved the story. *sigh* Anyhoo she is a great role model. 🙂
Yeap. Total crush lol.