Home Fashionably Fit Sound Off: Do You Wear Undies When You Work Out?

Sound Off: Do You Wear Undies When You Work Out?

In the midst of admiring Well & Good’s coverage of the new Under Armour store that opened here in SoHo, I noticed the following:

Sports bras, bra fittings, and a wall of thongs and briefs—who would’ve guessed how sexy (and colorful) you could look underneath your sweaty outfit? The stretchy and seamless undies come in everything from neon stripes to pink snake-print, plus, they’re not hiding in bins, so you can easily find what you need. The bras are arranged by low, mid, and high-impact. We’re calling Under Armour “the Victoria’s Secret of workout underwear,” minus the thong bling.

Once I tweeted about Under Armour being dubbed “the Victoria’s Secret of workout underwear,” I was asked the following question:

@bgg2wl @UAWomen I had a conversation with friends this weekend. Are women supposed to work out without panties?

….at which point, I was stumped. 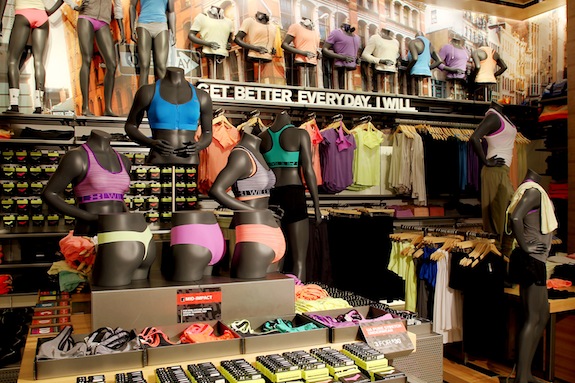 I mean, I can understand not wanting to wear regular underwear if you’re going to get all sweaty-soaked, especially in activities like running or cycling where regular underwear can bunch up in uncomfy places, or have seams that’ll cause you to feel like you have rashes or “rug burns” in unpleasant places… but is the answer fancy panties or no panties at all?

(And if you’re going commando, are you wiping your booty sweat off the machines? Don’t make me shake my fist at you!)

On Becoming “That Fit Bitch”

The Ten Commandments of Gym and Workout Wear

Training Undies: Should You Wear Any? Which Kind?...

I wear my regular cotton panties under my exercise clothes

Well, I have to admit…I GO Commando (lol)! Not to worry. I wipe equipment down after working out. I don’t see the point of wearing panties just to sweat them out and feel uncomfortable during my workout. I make sure that all of my workout bottoms are as flattering as possible and have cotton crotches (to avoid yeast infections). I’ve recently started my weight loss journey, so underwear is the last thing on my mind. I’m concentrating on getting through the workouts. 🙂

I don’t wear panties when I work out. Not for any sweaty reason. I don’t wear panties unless I have my cycle in my regular life, so why would I wear them to work out. I don’t wear a sports bra. I wear a regular bra. I have one in particular that feels good and gives the smallest amount of jiggling. I am a 42J. I have dropped real money on sports bras that didn’t hold up their end of their end of the bargain. So I do my own thing

I wear thongs when I run because the usual panties move about and I don’t like the feel of wet material sticking to my body. I have considered not wearing underwear but I don’t feel comfortable going commando in public, I would be paranoid about random leakage and everybody seeing an outline of my privates. Just the fact that there is an outline of my behind is distressing enough as it is.

Yup, commando under workout pants, but I do wear a sports bra (otherwise I’d be in SUCH pain!) And I ALWAYS wipe down the machines, whether my butt touches them or not. =)

I don’t wear a regular bra, though. I just do a sports bra.

I workout in panties. Really doesn’t matter, whatever underwear m wearing before the gym, is the gym underwear for that day.

I feel like such a prude here! It never even occurred to me to not wear panties (btw I hate that word!) but I usually wear regular cotton undies if I’m just around the house doing a dvd or pilates. Cotton thongs for everything else.

Commando. That’s the purpose of those thick Lycra pants. Always wipe down.

OMG I could not go commando all day, only at night while sleeping!! Or if I am trying to be super sexy for the hubz. Otherwise, I have “workout thongs” that I wear ONLY to workout because they are so uncomfortable to me to wear on a regular basis. I like a nice cotton panty, good for the lady parts.

I usually run after work so I wear my underwear and then change them after I shower. Honestly, I’ve never had any issues with my regular underwear and working out, and I’m a runner. Also, most of these underwear are hella expensive to be wearing simply for an hour or two tops. The only times I’ve had undies issues is if the underwear just weren’t fitting right to begin with, and that has nothing to do with sweat and working out.

Also, the thought of putting my underwear-less behind on a machine at the gym when I’m not 100% it’s been wiped down properly makes me feel violently ill (I go to a campus gym and a lot of those college guys are kinda gross). I’ll stick with my cotton undies, thank you very much.

“Also, the thought of putting my underwear-less behind on a machine at the gym when I’m not 100% it’s been wiped down properly makes me feel violently ill”

I’ve said it before, and I’ll say it again… y’all should be wiping down equipment before you use it, anyway.

I don’t wear panties while working out; I put a small towel down on the equipment even after wiping it down.

It depends on the day, I regularly go commando because I am always in leggings for work and working out. Side note: I work in a gym..I am not a Trainer just a behind the scenes staff but my uniform is comfortable gym like attire. Those panty lines ain’t cute so coworkers wear thongs or go commando too. If I have on baggies clothing, jeans or in that time of month I will wear undies and therefore wear undies to workout (don’t worry I mean 2 separate pair). I don’t really do sitting exercise but when I use a mat for yoga or an ab workout, the towel goes under the booty.

Absolutely, don’t want to get hit in the face with these boobies..lol Seriously, don’t perspire I sweat a lot it helps to wick away the sweat and keep me comfortable.

I wear panties, but bought special microfiber boyshorts for working out in. I read an article a couple of years ago where a trainer said not to wear cotton panties to the gym (she said nylon and 100% polyester are not good choices either) and switching to a non-cotton microfiber made a WORLD of difference. No more bunching, no more sweaty clinging. I don’t go commando except to bed.

Howdy,
For me it depends on what I’m doing in the gym. For workouts that require more movement or bounce as my daughter would say such as running on the treadmill or Zumba I wear fitted boy shorts due to my blessed bottom. All other activities I too am commando and YES I wipe machines before and after use. There’s my 2cents from Texas!

I work out at my home gym most of he time, but I NEVER wear underwear!

Haha! I love this topic! I go commando to work out, and I wipe down machines before and after myI use them. But because I don’t wear underwear I make sure I’m not wearing shorts on legs day! Get on that thigh abductor and spread your legs wide in front of a gym-length mirror… Don’t want to be in shorts with no underwear! 😉

Panties for me!! But the bunching always bother’s me. I’ll try commando and see if that’s better for me.

I don’t workout in a gym. Sometimes I wear them, sometimes I don’t. When I do it’s whatever I wore that day. I don’t wear thongs or boy shorts so regular old undies. But I haaaaaate to be pulling underwear all through my walk and what have you so if they’re going to impede my movement I take them off.

I wear cotton undies to run or do zumba in the winter. I wear moisture wicking workout briefs or bikinis by Moving Comfort to do Bikram Yoga or to run in the summer. They’re great. I’ve tried commando and couldn’t last 5 minutes. No bueno!

YES! Cotton only. I can not wear spandex (anything!) Cotton, always cotton. Cycling, yoga, walking, aerobics.

I have to wear a comfortable boy short or some kind of cotton underwear to help hold everything in lol.

Well………I don’t work out in a gym. I run and do bootcamps. Needless to say, I do not work out with underwear on unless I’m wearing something that would require me to have them on (high impact days, wearing shorts etc). They just get too uncomfortable for me, whether it is a thong or some grannies.