I’m pretty sure I called it months ago…but hey:

Jessica Simpson is on a mission to get back in shape after giving birth a month ago – and today was officially announced as the new face of Weight Watchers. 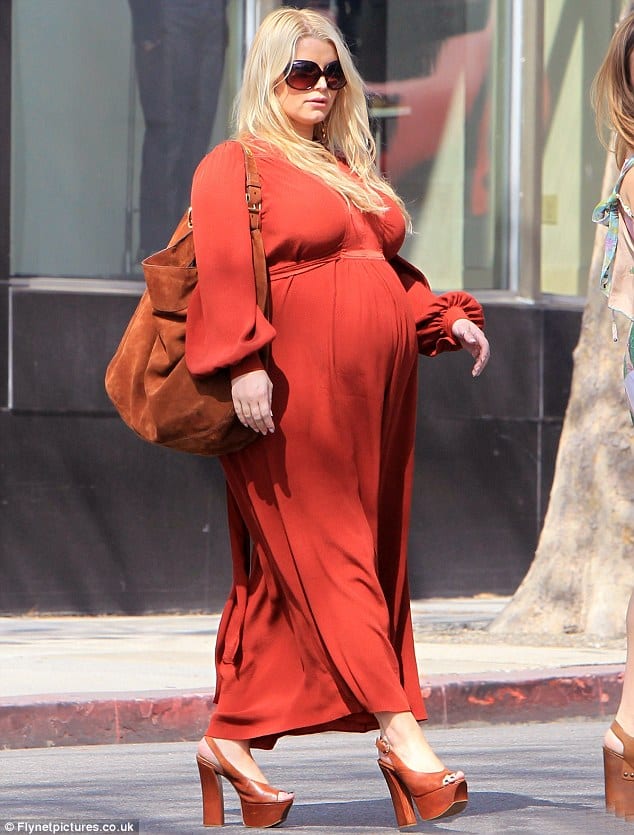 The former singer, 31, is the new North America ambassador for the points-based weight loss programme and joins the likes of Jennifer Hudson, who also fronts campaigns for the brand.

Jessica will trade ‘yo-yo dieting for a healthier lifestyle,’ according to a Weight Watchers spokesman.

Jessica spoke to the new edition of People magazine, in which she appears in a photo shoot with daughter Maxwell Drew and fiance Eric Johnson.

She revealed she is eating simple meals, including shrimp with sautéed spring vegetables and quinoa.

Talking about how she is anxious to shed her baby weight, Jessica told the magazine: ‘After you have your baby it’s like, “Oh my God, what happened to my body… this is not me”.’

Simpson revealed she planned to join Weight Watchers before she learned she was pregnant.

Her weight has yo-yoed over the years and she is keen to feel comfortable in her skin again.

She went on: ‘It would be nice to feel comfortable in a bikini, but that’s not my goal. I just want to fit into jeans.’
Read more: http://www.dailymail.co.uk/tvshowbiz/article-2152333/Jessica-Simpson-announced-new-face-Weight-Watchers.html#ixzz1xasiropx

I really… really hate this for her.

I hate seeing a woman say she’s not comfortable in her own skin. Gabi Gregg, epic fat-shionista, said something that I think is relevant here:

“I’m all for health. I think people should be really aware of what they are putting in their bodies and try to get more active, but the truth is we have to live in the bodies and be happy with the bodies that we have right now, regardless of where we are in our journey to health.”

Like, if Jessica wants to lose weight and stump for Weight Watchers, then hey, whatever. YOLO. But please, for the love of all that is kind and good, stop perpetuating the idea that a woman should be unhappy until she can “fit into jeans,” as if “jeans” aren’t made in every size and she doesn’t have enough money to get new ones. A woman doesn’t need to think less of herself in order to want to change her body and if weight loss is, in fact, this very emotional thing, then trying to bring those negative emotions about herself out of a woman when all you can do is help her eat more vegetables… it’s irresponsible. You don’t fix negative body image by “getting skinny.”

Just… if your company so about “feelin’ good” and flying, stop perpetuating poor body image to make money. It might be profitable, but it’s gross.

5 Things You Need to Know About Salt

Being Overweight Increases Risk of STDs and Unplanned Pregnancies?

Do you consider weight watchers to be a form of calorie counting?

I don’t know enough about the program to comment on it, I’m afraid to say.

I do know that I find the statements and phrases I hear in their marketing to be problematic.

Jennifer Hudson’s “screaming” notwithstanding, I think she and Jessica Simpson are doing the smart thing, as Weight Watchers is truly about changing one’s lifestyle, rather than following a “diet.” Much of what you advocate, about 99.7%, is present in the WW Points Plus program, and it offers support through meetings, which many need for accountability.

That Jessica defines “healthy” as being able to fit into jeans is unfortunate, but it’s not that different from what many women see as the end goal, particularly those who are in the public eye. I’ve lost 5% of my body weight following WW Points Plus program, so I know that I’m becoming healthier, and I’m closing in on my 10% goal. I know that this journey will be a long one, as I have to lose the equivalent of an adult male, but it’s doable, and I have an amazing support structure to help me see this through to the end. I count Ericka and this blog as part of that support structure, too, so perhaps we need to pass along the URL to Jessica and Jennifer so they can thrive at whatever weight they are, as they continue to pursue health, not a particular size or weight.

“That Jessica defines “healthy” as being able to fit into jeans is unfortunate, but it’s not that different from what many women see as the end goal, particularly those who are in the public eye.”

I mean, I get this. It isn’t about me chastizing her for having a physical goal. There’s something in the language being used here that is highly problematic for me and it’s triggering something serious.

Every woman wants her body to look a certain way, after all and any health issues are settled. But this PR… something absolutely does not set well with me, here. It just doesn’t.

I totally get that. I have to say that nothing in the WW promotional materials ever enticed me to join (it was a turn off, actually), but when I saw my sister become healthier using them and then complete two half-marathons, I knew that I wanted to see what my body would do, despite having a chronic disability. I had used that as an excuse for why I ate only once per day, why I gave in to fatigue rather than fighting through it to maintain an active life, etc. Without that personal connection, I doubt I would be doing this now, but I know it’s been beneficial to me.

In fact, now that I think about it, the only spokesperson that really resonated with me was Queen Latifah, who wanted to lose about 10% so she would be healthier. Too bad that campaign only lasted for a *very* short time, but I thought it was a more effective approach to marketing the program.

Now, when you begin to franchise BGG2WL, I’m definitely buying one! 😉

She sounds very unhappy with her body after pregnancy. This is not healthy. I hope she loses the weight but also it should be recommended to talk to a counselor for post pregnancy and her body image issues. During her weight loss journey she might need extra support that helps her understand her body changes.

It’s hard to be happy in your body if YOU are not happy with your body. Personally, I wasn’t happy and I’m definitely not content with mine, so instead of complaining about it I decided to change it. I tried WW before and it didn’t work for me, but more power to her! Another thing I know is that the longer you wait to try to lose weight, the harder it is.

You guys are missing my point.

Why does being unhappy with your body overpower your ability to be happy IN your body?

Here’s a revolutionary thought: you can experience progress in your goals without the self-hatred and negativity. It doesn’t serve as a positive motivating force within our lives. (Sorry. A little 90s R&B never hurts a convo.)

I was saying that she should get therapy to build up better body image during her weight loss journey. This is teach her to be positive throughout her journey.

Um, the media and everybody I see and talk to that has lost weight makes ME FEEL that they are so much more HAPPIER with their NEW bodies. There is no commerical, as much as I want one LMAO, that says, You are beautiful the way you are and you should be happy with yourself no matter how much you weigh…..um, where is that commerical lol. I know, I know, I should already know this and on the contrary I have seen women that are plus size that have high self esteem and I love it. But yeah that’s where I get the idea from, as you asked.

So, in other words… you didn’t get that idea from a rational and conscious conclusion that YOU made for yourself – you got the idea from all the other people and things around you?

Wished they had a program that did healthy eating along with therapy. It’s not only about what you look like cause many “thin and beautiful” people are having a hard time loving and accepting themselves. Getting in the jeans you want isn’t all of a sudden going to erase the issues that got you overeating while you were pregnant.

I do consider Weight Watchers a form of calorie counting. I’ve been doing it for a while and have gone from 203 to 174. Still on the journey to my goal weight, but it does work, when I do it it correctly. I wouldnt want to be skinny though. healthy is my goal. You can by skinny and very much so unhealthy.

As far as Jessica Simpson, she’s going to struggle with body image period until she comes to grips with what she looks like at 100 lbs or 200 lbs. I hope she gets help or it’s just going to trascend to her daughter.