Home Celeb Watch So…How Can I Hang in the Air and Flip Like Pink?

So…How Can I Hang in the Air and Flip Like Pink?

Now, if you ask me, the best musical performance of last night’s GRAMMYs was, without fail, Kendrick Lamar and Imagine Dragons. They slayed, no question. 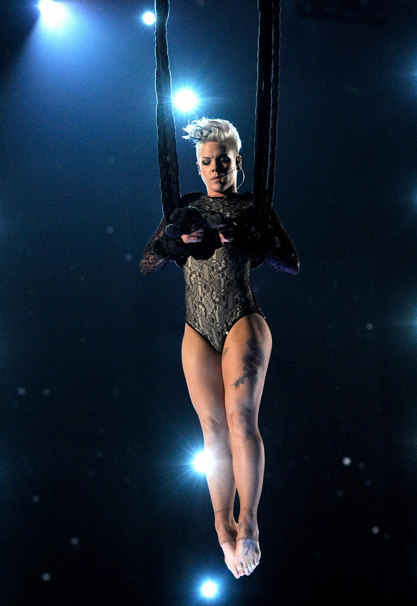 If you want to talk to me about breathtaking, intriguing, and low-key awe-inspiring, I’d have to say Pink.

I know, I know, we’ve all seen her acrobatics before, but I think there’s something about her particular style of acrobatics – she might be in the air during every performance, but you have to pay attention; it’s not the same moves, the same flips, and if you’re familiar with the work of Cirque du Soleil, this kind of work is less of a “gimmick” and more of an “art form.

Pink, with a grown man flagpoling off of her. Holy moly.

Believe it or not, you, too, can learn to flip in the air like Pink! Known as “aerial silks,” the average class teaches you how to perform a lot of the same moves that Pink performs, only maybe two feet from the ground as opposed to the 40 that Pink performed.

Unless, of course, you’re this girl and you’re doing it comfortably after only six months:

Pink’s performance was a combination of Cirque and pieces reminiscent of the @progressive_calisthenics twitter:

were all enough to make me feel not only proud of the athleticism displayed, but inspired. Capable bodies, bodies that perform, are strong. Kudos to Pink for displaying that during the show. Her physique is obviously strong, and it’s clear she trains hard – only the most confident of performers can do what she’s done, and do it repeatedly. That’s so, so major.

If you want to test out aerial silks for yourself, you’ll need to find a trapeze school, a Cirque-inspired dance studio, or – very simply – an Aerial Silks studio in your area. Trust me, I know – Mini-me wants to be Pink when she grows up!

And don’t ask me how I feel about it – I tried a class once, and was so unready. So, soooo unready! (I’m going back, though!)

What about you? Have you taken aerial silks before? Got any good studio recs for your area? Let’s hear it!

Guess Who Was Featured on Well and Good NYC?

I have never tried and I would be way too scared to attempt lol But she was definitely amazing. I agree with your favorite performance- I can’t believe Kendrick Lamar walked away without a grammy! I love your blog, you motivate me to stay positive throughout this emotional weight loss journey- thank you! 🙂

See, I happen to be a big Imagine Dragons fan, but the energy Kendrick gave on stage made the performance better than I think ID could’ve done on their own. I mean, it TOTALLY ROCKED. *head bangs*

You should consider it! As I showed in Mini-me’s class, they start you pretty low to the ground. LOLOL

LOL you are so funny! I agree with you- the performance was amazing!! Best one. But I loved seeing me some Beyonce! I love her.. I hear people saying she looked too skinny and I’m like wow, you just can’t win in this society. I thought she looked amazing and that performance motivated me to take my butt to the gym!

I loved her performance, too! And I totally expected her to get backlash for her figure, but I hope no one’s paying that any mind, especially her. Other people can’t decide for you what works best FOR you.

They have studios in dallas where I live. currently doing crossfit to get stronger so I can do it.

I did an open house at Philadelphia School of Circus Arts once which let me test out Aerial Silks. SO hard on the hands.