Home Beauty Don’t Have a Thigh Gap? Just PhotoShop One!

Don’t Have a Thigh Gap? Just PhotoShop One!

Why the hell not? One brilliant photo editing team did:

The last question you should be asking yourself when you’re cruising Target’s website and looking at pictures of the models showcasing the clothes is: “Where is her vagina?”

Oh Target, trying to nail that ever so popular crotch gap pic.twitter.com/pfUcIWiiON

And yet, that’s almost definitely what ran through people’s minds when they stumbled across this horribly (and that’s an understatement) photoshopped pic of a model wearing a Junior’s bikini. Obviously they were going for that whole thigh gap look that people disturbingly crave, but they forgot to make sure that her uterus remained intact.

Young women, to be clear, you do not want your undercarriage to be this skinny. Because a huge chunk of it is missing, and you need that to reproduce, among other things.

Apparently, that thigh gap wasn’t the only thing that got a little bit of touching up. Take a look at the model’s armpit:

Oh, but wait. That’s not the only part of the photo that’s embarrassingly hacked up. Take a look at Target’s attempt to make her arms and waist a bit skinnier: 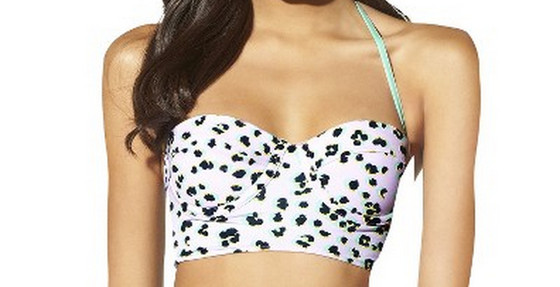 Who can guess what I’m about to say right now?

Get Life: The Power of ‘No’

This one trend I do not get. I live in a community where thick shapely thighs are the dream…not thin and skeletal. It’s not attractive. Personally, I’m looking to get thicker more shapely thighs through exercise.