I’m very aware of how rarely I talk about body image issues for men, but that’s because I don’t think I could do it justice. I’m not a man, and I’m willing to respect that body image holds a different effect in the lives of men in this world than women.

That being said, when I read the bulk of this article, it’s worth noting that I saw more than my fair share of similarities and, for that matter, lessons that we can learn.

I give major kudos to dos Santos Alves, for his self-awareness and self-compassion. He’s very clear on what has contributed to his need to continue the practice, and what challenges his ability to stay clean. Yes, “stay clean” – his interview makes a pretty clear case for why this kind of thing quickly becomes an addiction, regardless of which gender you’re talking about.

A BODYBUILDER who modelled himself on the Incredible Hulk risked his life injecting a cocktail of oil, painkillers and alcohol to pump up his biceps — with astounding results.

Former bodyguard Romario dos Santos Alves, 25, terrifies children with his supersized muscles and is facing a catalogue of serious health issues since turning to the injections. The married dad-of-one says his experiences of using the synthetic filler became so extreme that he was even scheduled to have his arms amputated.

“If you take it once there will definitely be a second time — it’s addictive,” Romario told Getty.

When we talk about the addictive properties of both cosmetic surgery and black market procedures, alike, we’re talking about two sides of the same coin – people believe that “fixing” this thing about themselves will bring them great joy, satisfaction, and an improved quality of life.

Like we always say, when you look hard enough for something, you’re certain to find it.

After the procedure, you’re most likely to put yourself in situations where you’re likely to receive the praise and compliments you originally sought out. And, once you get them – “them” being the praise you’d once desired so much – you fixate on it. You’re finally happy. It consumes you…until it’s time to “get more.” And the cycle repeats itself.

Romario became obsessed with the drug cocktail after moving from his hometown of Caldas Novas to Goiania in Brazil three years ago.“I saw some really big guys in the gym with huge arms and I started to make friends with them. They introduced me to it and I got excited about the results — I lost control,” he says.

As an aside, because of the size and shape of these kinds of implants, I cannot imagine – for the life of me – what it does internally to attempt to still build muscle on top of these kinds of implants. It’s already destroying the fiber of the muscle group in which it’s implanted, virtually to the point of no return. Working out and further destroying the muscle fibers? What kind of pain does that feel like?

The same goes for implantation in your behind, as well. Things like sitting, standing, dancing, eventually have the same kind of effect on the gluteal (booty-based) muscles, and the injected implant makes it difficult for your body to heal.

I’d also be curious about whether or not that would have a major effect on your kidneys, if you’re constantly breaking apart muscle that is unable to heal.

Romario soon found more dangerous ways of injecting himself with the oil, to the point where his muscles “started to solidify and I couldn’t even inject my arms — they were full of rocks.

“I decided the only thing I could do was buy specialist needles to inject, the kind of needles used on bulls — there are no stronger needles around. I know it seems stupid but I had to get my fix.”

Your arms are full of rocks, so to penetrate the rocks, you purchase needles strong enough to be used on bulls. 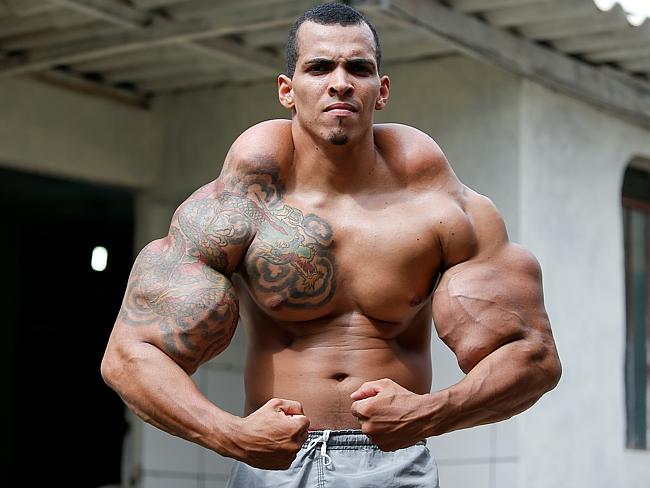 The cycle requires you to abandon logic and safety in order for you to continue to receive the benefit and, in the case of these kinds of procedures, the “benefit” is the praise from both others and self. Looking in the mirror and seeing the fantasy that you dreamt up… that’s the benefit.

He even tricked wife Marisangela Marinho, 22, into injecting him with the oil in places that he could not reach.

“I told her there was no problem with it — that it left the body after a short time,” Romario explained. But after she learned the truth she made it clear that he had to choose between their relationship and the oil.

“She told me that if I start using it again or anything like it she will leave me because of what she went through. That was the hardest part of our life because I had depression and I was removed from my job because I tried to kill myself.”

When you have to lie to your partner in order to avoid the consequences of using [the injectables], you have a problem.

Romario’s biceps had swollen to an incredible 25 inches when he ended up in hospital.

“I was hospitalised in a clinic and my wife was six months pregnant — it was just me and her, no friends or family,” he says.

“I decided to fix my ways and I never again wanted to take any drugs. We went through a really hard time and almost starved.”

The filler was causing Romario constant pain, and he almost suffered kidney failure due to the toxins in the oil. He was at one point told by a doctor that his only course of action would be to have his arms amputated.

Oh, wait – there’s that kidney problem I mentioned. In conjunction with what his doctor told him, it’s also worth noting that an overabundance of protein in your blood stream can cause kidney issues too – much like what happens when you lose too much muscle all in too short a time period.

Romario’s bizarre appearance generates mixed reactions from people in his hometown, and reactions from some members of the public meant that his mental health deteriorated.“One time I was working in a Catholic Church and a woman came up to me and said that her 12-year-old daughter wouldn’t come in because she was afraid of me,” he says.

“She said that she thought I was a beast, a monster — I just put my head down and didn’t say anything.”

He did also receive praise and adulation for his incredible physique — which made it even harder for him to kick the addiction.

Romario has not used the substance for two years, but other muscle enhancing drugs still tempt him from time to time.“Two weeks ago I bought a horse hormone. I put the needle in my chest and sucked in the air to see if I got a vein but nothing came out. I froze and started to sweat,” he says.

“My mind started remembering things that I’ve gone through and I thought that I couldn’t do it — I couldn’t give into temptation again.”

Romario still has ambitions to become a professional bodybuilder but is committed to staying clean.

When people ask me why I haven’t actually done a competition yet, I think back to issues like this – there’s a reason why there are “tested” competitions and “untested” competition, where they drug test you to guarantee that you’re clean and not using a performance or appearance-enhancing substance. This largely contributes why to untested shows always have a much larger pool of competitors than untested shows.

Honestly, the industry isn’t quite what I expected – from an abundance of eating disorders to appearance-enhancing drugs – and people who aren’t quite able or equipped with the right resources to get involved instead… well… cheat. Like this. And, thanks to big prizes, it only feeds the individual’s desire to continue the practice.

It’s not just the bodybuilding industry, though, and many people involved in it are in fact on the up and up. The same could be said for the stripping industry, too – there, it is incentivized to use appearance-enhancing injections, and you earn big prizes for doing so.

That being said, we need to do what we can to make sure people are informed about the consequences of these kinds of choices. They’re not safe, they force you to think and function illogically, and they alienate you from the people who love you and want to see the best for you, all on top of potentially risking your health, your limbs, and your life. And I want to see y’all thrive. So, please. Just say no.

What did you take away from this article?

Think of the mental damage this guy went through!

To get to that point in the first place, to do that to your body. And than lose it…

Thank you for the good read!
-Jessie