Warning: there is a suggestive photo included near the bottom of this post.

From the Photoshop Blog:

As a mother of two young children, I often have thoughts of how life will affect them. What will bring them joy and what will hurt them. Will a word make them lose their confidence? Will an image cause them to question their self-esteem?The American Medical Association (AMA) adopted some new policies at its recent annual meeting. One of these was around “Body Image and Advertising to Youth.” Here’s what the AMA said:

BODY IMAGE AND ADVERTISING TO YOUTH: Advertisers commonly alter photographs to enhance the appearance of models’ bodies, and such alterations can contribute to unrealistic expectations of appropriate body image – especially among impressionable children and adolescents. A large body of literature links exposure to media-propagated images of unrealistic body image to eating disorders and other child and adolescent health problems.

The AMA adopted new policy to encourage advertising associations to work with public and private sector organizations concerned with child and adolescent health to develop guidelines for advertisements, especially those appearing in teen-oriented publications, that would discourage the altering of photographs in a manner that could promote unrealistic expectations of appropriate body image. 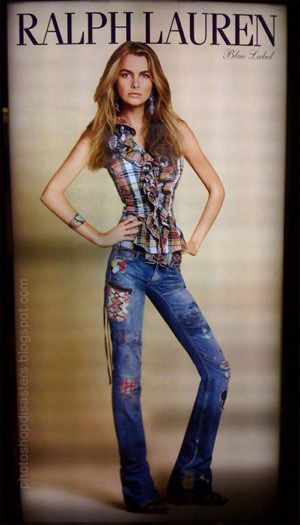 “The appearance of advertisements with extremely altered models can create unrealistic expectations of appropriate body image. In one image, a model’s waist was slimmed so severely, her head appeared to be wider than her waist,” said Dr. McAneny. “We must stop exposing impressionable children and teenagers to advertisements portraying models with body types only attainable with the help of photo editing software.”

We have a lot of parents on the Photoshop team. And while we respect each person’s creative expression, realizing that art is in the eye of the beholder, there is also the responsibility to consider context, especially in the case of youth. This is not about censorship – it’s about supporting creative expression and encouraging responsible use.

We at Adobe applaud the AMA for raising this issue so parents can be prepared to have open and honest dialogue with their children about body image and advertisers act responsibly. As a parent and proud member of the Photoshop team, I look forward to contributing to this important dialogue.

Now, while I’m not entirely sure that we see an abundance of Black women being airbrushed to such a degree that their heads are larger than their waists, I’m well aware of the fact that many are airbrushed – and positioned – in ways that imply their bodies are something they are not. We’re all familiar with that “look back at it” pose where women hide their stomachs and flash their behinds to the camera. It’s one thing to have a body similar to that naturally. Having your head measure as larger than your waist? Doubtful.

I cover this stuff a lot, but that’s really because I don’t have much hope in industry changing their minds. Why?

A study by business professors at Villanova University and the College of New Jersey, inspired by Dove’s “Campaign for Real Beauty,” shows that ads featuring thin models made women feel worse about themselves but better about the brands featured.

Women in a sample of 194 college students aged 18-24 expressed more negative feelings about their sexual attractiveness, weight and physical condition after seeing thin models than before. So-called high self-monitoring women, or those more concerned about what others think of their appearance, were the most negatively affected by seeing the thin models in the study.

More likely to buy
The professors are still preparing a written report on results from a second phase of the research, which found that despite the negative effect on their body image, women preferred ads showing thin models and said they were more likely to buy products featured in those ads than in ones showing “regular-size models,” said Jeremy Kees, a business professor at Villanova.

Karen Becker-Olsen, a business professor at the College of New Jersey, also has been conducting the research. She couldn’t be reached for comment by deadline.

“The really interesting result we’re seeing across multiple studies is that these thin models make women feel bad, but they like it,” Mr. Kees said. “They have higher evaluation of the brands. With the more regular-size models, they don’t feel bad. Their body image doesn’t change. But in terms of evaluations of the brands, those are actually lower.”

Mr. Kees acknowledged the findings create something of a quandary for marketers, who might have a positive effect on young women’s self-esteem by showing more typical women in ads, but suffer in the marketplace as a result.

“I’d tend to be cautious about using models in advertising that wouldn’t maximize the attitudes and evaluations of the advertising and the brands,” he said. “Certainly [Dove is] getting a lot of publicity, and it’s a great, innovative campaign. But in terms of the bottom line of how that might be impacting … purchase behavior, I’m not sure.” [source]

It’s things like this that make me less hopeful for any meaningful change, specifically because I don’t expect companies to take the chance of doing something that isn’t inherently profitable for them, especially when the harmful thing is what brings in the money… regardless of how it affects the buying public.

I guess that’s why it’s most important for me to write about what goes on behind the scenes, the logic behind creating these images. It feels more important for me to explain how unreal they are – and to hammer that point in over, and over and over again – so that the public can stop supporting images that don’t support them and raise our children to do the same… and knowing the realities behind why this happens is important. Stop consuming media that is, apparently, harmful to our collective self-esteem. Make conscious decisions about who you support, and why.

Thank you for posting this! I think it’s seriously shocking to see the difference between real and photoshop. I think most adults these days know it’s photoshopped and not real especially when we browse the tabloids that like to show the celebrities au natural. The sad part is pre-teens and kids don’t know the difference and are striving for a sense of “perfection” that’s unrealistic!

This right here is why I limit my viewing of magazines and commercials. I am not subscribed to any of the popular magazines for I refuse to clot my brain with a false view of how I should look. This is a good post!

I try to remind myself that even celebrities who aren’t being photoshopped – in video interviews for example, are still not operating under the same reality as me. I could work out and eat perfectly, but without the genetic blessings, stylists, team of people working to make me beautiful, surgeons, nice lighting… well I’m not going to look like that. Nobody is, not even the celebrities.

I think in some ways the “curvy” body type is even harder to achieve than just thinness. Beyond surgery, there are some things that if you don’t have it, you’re just not going to have it. That said… I never knew there was a name for the “look back at it” pose, and I may need to make that my new twitter icon! Jk 🙂

This is such a good post . It let me know that these images are always altered and not telling the real story. These unrealistic are daunting on the human. Marketers will not want to use real bodies because they are afraid of losing money. Hopefully they wll condition this new generation with realistic images so that the girls will be healthier mentally and physically. Since reading these articles I am no longer obsessed with bikini models, fitness models or anytype of models especially from victoria’s secret models.

Seeing thin models also made college-age women far more likely to turn down a snack pack of Oreo cookies offered as thanks for their participation in the study, or to opt for a reduced-fat version.

That’s not a TRUE reason to say “it’s a good thing to put only thin models in magazines”. I’m pretty sure these women turned those cookies down more because they were ashamed of eating that after receiving the message that “Thin is sexy and beautiful” than because it was a real conscious act.
It does not mean that behing closed doors, they don’t binge on those cookies. It was the immediate after effect, I’m curious to see how these women felt few hours or days after this experiment… did they turned Oreo down forever?