Adidas Accused Of “Promoting Slavery” With Shackles On New Shoe

I’m not going to lie – when I saw this, it literally took my breath away. I’m overwhelmed by the sense of tone-deafness I get from this:

Adidas has sparked outrage and been accused of ‘promoting slavery’ by creating a new pair of trainers which have bright orange ‘shackles’ that fit around the wearer’s ankles.

The clothing giant is under fire for its August scheduled release of the JS Roundhouse Mids, which many have compared to the devices worn by black slaves in 19th Century America.

The seemingly innocent promotional material, uploaded to Facebook earlier this month, asks: ‘Got a sneaker game so hot you lock your kicks to your ankles?’

But the shoes have sparked angry debate online, with many saying there is a more cynical tone to the advertisement.

More than 2,000 people have labelled the design ‘offensive’ and ‘ignorant’ and say the firm has ‘sunk to new lows’ in its ‘slavewear’ product. [source]

The article also mentions quotes from Dr. Boyce Watkins from YourBlackWorld, who said the following:

JS Roundhouse Mids, are purple and gray, with HANDCUFFS that wrap around the ankles.  Yes, I said handcuffs…shackles….the stuff that our ancestors wore for 400 years while experiencing the most horrific atrocities imaginable, most of which were never documented in the history books and kept away from you in the educational system, all so you would be willing to put shackles on your ankles today and not be so sensitive about it.

I laughed when I saw the shoes, because I already know how many people are going to say, “Boyce, why are you overreacting?”  There is always a group of Negroes who are more than happy to resubmit themselves to slavery.  In fact, commercialized hip-hop culture teaches black men everything they need to know in order to guarantee their own self-destruction (stay high/drunk, carry a gun, sleep with every woman that moves, remain uneducated and waste your money).  We follow instructions very well.

And now… the shoes. 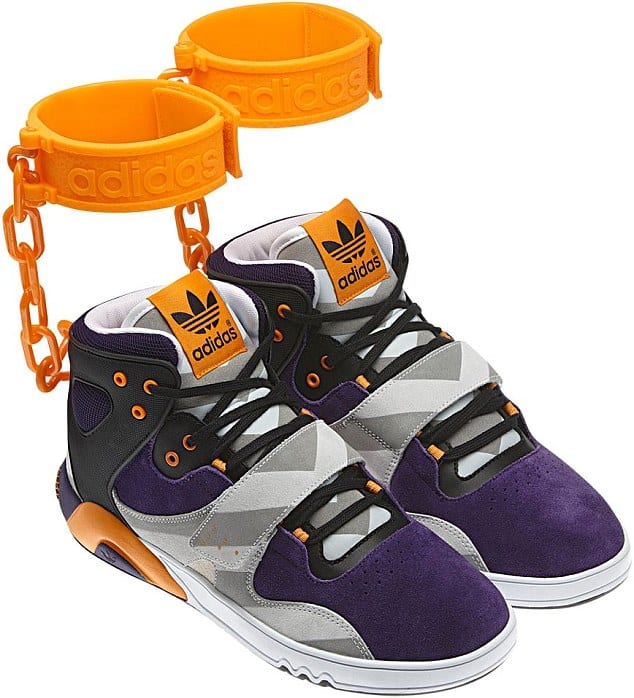 To balance out Dr. Watkins’ heavy-handedness, my girl Luvvie also had something to say about the Adidas shoes:

I know innovation is important and Adidas is tryna push the envelope but if they’ont tell Jeremy Scott to get in the garbage, I will. Harriet Tubman didn’t wade in the water so Juneteenth could exist for Adidas to make these sneakers. Sojourner ain’t speak her truth for this. Frederick ain’t part his ‘fro JUST RIGHT for these shoes to be so oppressive. NO MA’AMS! I AM FREE NOW! I’M IS FREE NAH, I SAY!

I’m just… I’m not going to pretend that prison and slavery are the only systems where people were subjected to treatment involving shackles. But I am curious as to what kind of historical ignorance must exist where someone thought that shoes with shackles might go over well.

Furthermore, I can’t help but wonder what Adidas thinks about its buyer that’d result in them thinking “Oh, they’d totally love shackles around their ankles!” 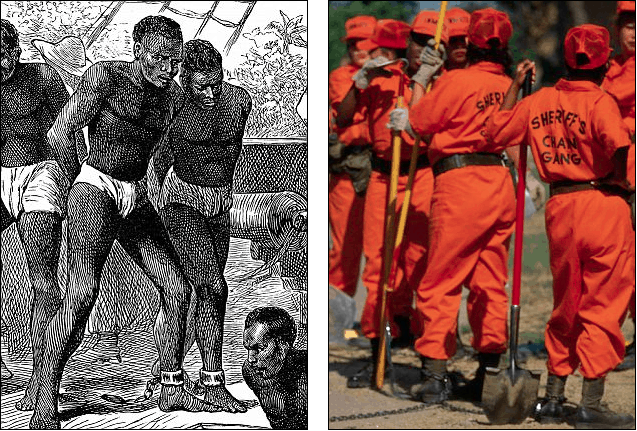 Daily mail compiled a couple of photos that might show what we think when we see “shackles.”

Let me know what you’re thinking, though – do you like these? Do you think people are over-reacting? Would you rock them? (Because we all know there is such a thing as “It’s cute, but I wouldn’t wear it!”) Would you put your child up for adoption for asking you to buy them these, or simply just wop them upside the head with a history book?

Also: I looked high and low and couldn’t find something saying this isn’t real. The designer, Jeremy Scott (@itsjeremyscott) is actually actively defending his design to people on twitter as early as three days ago. So… let’s just presume that, for now, these shoes are still a go. At $350. Uh huh.

Early Monday, Adidas defended the shoes as the handiwork of a whimsical designer. By early evening, the shoe giant found itself in a public relations nightmare and announced that it had made a mistake.

The Adidas statement reads, in part: “The design of the JS Roundhouse Mid is nothing more than the designer Jeremy Scott’s outrageous and unique take on fashion and has nothing to do with slavery. Since the shoe debuted on our Facebook page ahead of its market release in August, Adidas has received both favorable and critical feedback. We apologize if people are offended by the design and we are withdrawing our plans to make them available in the marketplace.”

While I don’t understand the shoe, and the only thing I can think of when i first say it was a “slave to fashion” . This is Jeremy Scott though, and I can’t get with most of his stuff anyway. He makes some pretty stupid designs for Adidas in my opionon. But In my own life, I don’t always think a pair of shackles is a direct stab to blacks and slavery. I think of them symbolically more than anything if that makes sense.

i agree, slavery did not come to mind. I thought, well maybe he was thinking something that could support the ankles, but it was a stupid move…

That’s exactly what I thought too. The shoe it self isn’t bad but those chains…..umm NO. Also won’t those cause injuries if you are playing ball?

Was Jeremy Scott trying to see how far he could take this? Of course the chains are prison orange. Just think there was a message there whether it is unconscious or conscious I hope it woke some people up big time.

Maybe this will be a wake up call to our youth and parents who wasted hundreds of dollars on this sweatshop made junk. On second thought, I won’t hold my breath. Nike and Addidas will continue to get rich due to ignorance. When is the last time you’ve seen a millionaire (who’s not a basketball or football star) sporting their shoes? Erica, you said a lot more than I would about this ridiculousness. No, no and no!

RoJo
Get yourself a copy of the research book White Cargo. Read the truth about the Irish and Scottish slaves.

I’m rarely quick to call something offensive. With that said, this is so bad! Seriously, sir?????? And let’s pretend for a minute that there weren’t shackles on these shoes. They are ugly. They probably knew realized this and decided to add a bit of controversy surrounding them.

You know how some hiphop goes out of its way to valorise violence and to make incarceration seem like initiation into manhood? So maybe this is an attempt to do something similar? Popular culture is full of so many trends that wink at racist practices and ideas that we’ve stopped questioning them. We just imagine they’re part of the “normal” background.

I have to say I wouldn’t be surprised if some folks actually went out and bought these shoes. The world is full of craziness.

P.S. I concur with Mel. The shoes are UGLY!

I am really through! The sad thing about this is that some people will actually BUY this.

I think those shoes are disgusting though and really shoes what Adidas’ thinks of its target demographic. Also, using those shackles to prevent shoe theft (as the marketing slogan implies), just…… I’m not sure logic was even a factor in this decision. I’m really not, other than “hey, what had no one else done before…” and “can’t you just imagine people being all like ‘dude, these shoes are so hott they need to be on lock down’.”

Also, based on the colors they appear to be marketed mainly to kids. Do they really imagine parents buying these (but the price suggests grown-ups). I also can’t help but wonder if this is Adidas’ attempt to get in on the supposed fashionization of prison styles (as sagging is rumored to have originated with)? The more I think about the concept and the marketing the more upset I get.

Go’s back to freedom to choose: what to wear, who to marry.. if you don’t feel them.. don’t buy them but don’t dictate to others.. learn to forgive.

I find this ugly shoe to be offensive. I think our younger generation may by them due to the lack of knowledge of our cultured history. History always repeats itself. It’s enough we are still enslaved today. Just look around. The previous article stated the drinking/drugs/jailed due to ignorance/babies raising babies without both parents. We lack the knowledge of knowing our savior Jesus Christ. We are living in pearless times. Lovers more of themselves than of God. Were killing eachother without thinking. Wake up! We are in need of eye opener. Wake up everyone look around. We need to love ourselves. We need unity. We need to embrace our culture. Take off the chains don’t put them on. If we truly knew Jesus we would have real love not a form of Godliness denying the power there of. God is watching us. Is he or she happy with were we are and what we’ve become?

If I spent that much on shoes I’d chain ’em to my legs too.

I didn’t think slavery or incarceration when I saw those shoes, I thought ugly; however if someone’s into bondage…that’s another story.