Home Did You Know When Corn Becomes Too Costly, Cows Get “Gummy Worm, Marshmallow, Cookie” Feed

Listen. Listennnnnnnn. This is hilarious to me:

Mike Yoder’s herd of dairy cattle are living the sweet life. With corn feed scarcer and costlier than ever, Yoder increasingly is looking for cheaper alternatives — and this summer he found a good deal on ice cream sprinkles.

“It’s a pretty colorful load,” said Yoder, who operates about 450 dairy cows on his farm in northern Indiana. “Anything that keeps the feed costs down.” 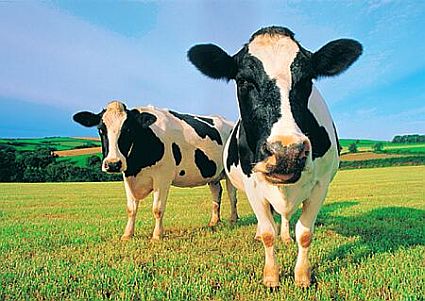 As the worst drought in half a century has ravaged this year’s U.S. corn crop and driven corn prices sky high, the market for alternative feed rations for beef and dairy cows has also skyrocketed. Brokers are gathering up discarded food products and putting them out for the highest bid to feed lot operators and dairy producers, who are scrambling to keep their animals fed.

In the mix are cookies, gummy worms, marshmallows, fruit loops, orange peels, even dried cranberries. Cattlemen are feeding virtually anything they can get their hands on that will replace the starchy sugar content traditionally delivered to the animals through corn.

“Everybody is looking for alternatives,” said Ki Fanning, a nutritionist with Great Plains Livestock Consulting in Eagle, Nebraska. “It’s kind of funny the first time you see it but it works well. The big advantage to that is you can turn something you normally throw away into something that can be consumed. The amazing thing about a ruminant, a cow, you can take those type of ingredients and turn them into food.”

So, let me get this straight.

Cows – who aren’t even supposed to be eating corn, by the way – aren’t getting enough corn because the increase in corn would result in an increase in beef prices.

So, instead of simply taking the hit and increasing the prices on the animal flesh, they go and purchase products that are, in fact, made of corn because, ostensibly, the stuff made of corn is cheaper than the corn itself?

When we talk about the importance of sustainability, this is why we yell so loudly about it. This is why we say we need to make sure that all the venues through which we acquire food are using sustainable methods. Because when stuff starts hitting the fan, feeding our animals the kind of stuff that we avoid eating ourselves (or, at a bare minimum, acknowledge that we shouldn’t be eating regularly) on a regular basis is not going to cut it.

Cow, properly raised, is expensive. It’s supposed to be. It’s a several-thousand-pound animal. It’s also supposed to be lower in fat than it usually is, and be allowed space to… actually, I’m pretty sure I’ve mowed this lawn, before:

We, here at BGG2WL, know what happens when you feed someone a lot of something they shouldn’t be eating… and prevent them from being able to move. They’re unable to healthily develop muscle, and equally unable to burn any fat they gain. Since they’re having a hard time developing muscle… the industry doesn’t say “Let’s give ‘em room to play and grow healthily.” They say “Give ‘em growth hormones.”

Take it a step further, though. Because the cows aren’t eating what they’re supposed to be eating, they’re unable to fight off infection (sound familiar?) and illness. So, instead of saying “Ohhh, we’re making the cows sick, let’s go back to giving them what they’re supposed to have,” the industry says “Give ‘em antibiotics.” The anti-biotics can’t take care of everything, so the cows have to have a hole created so that a “ranch hand” (literally) can reach their hand inside the cow and pull out the infectious and indigestible product. Any antibiotics may help with illness, but not infection… so the meat is thereafter cleaned with ammonia.

I’ll be honest. I don’t eat red meat, but it has nothing to do with it being generally not “clean eating-friendly.” Cow can be clean, but these cows certainly wouldn’t qualify.

If you want cow, and want it clean, go with the good stuff and, if you’re concerned about the price, eat it less often and in smaller portions. Rest assured, it’ll taste better and be better for you.

5 Reasons You’re Spending Too Much On Eating Clean

The Case Against Diet Soda (And Aspartame… And Splenda.. And….)

I JUST heard this yesterday evening on NPR, the horror – and when they don’t like the cereal the rancher gives them he tops it with syrup!!! Lord! This is when the demand for grass fed beef needs to increase.

This right here is why I don’t eat meat. They only want a fat cow to slaughter and don’t care about the health and welfare of the animal or of the person who is going to consume the animal. I am so glad you mentioned antibiotics because, the reality is that the cows who eat that junk are going to get sick and they are going to need more antibiotics to keep the animals alive long enough to make it to slaughter. It’s bad when they are eating corn instead of grass, it is worse when they are fed this junk just because it’s cheap.

I was JUST about to email you this story to see what you think! Good catch Erica! This really solidifies my decision to not eat beef unless I buy it organic! It is sad what is happening to our food…

Reading this article just confirmed why I dont eat read meat. This article makes me gag at the thought that USDA will allow this to happen to our food. This is very sad.

They wonder why some countries are banning American beef or taking it in yet identifying it as a problem. I also don’t eat beef, one because I am tired of it. My father was a depression baby so because food was scarce that was all he wanted when he grew up. We had it was a choice every Sunday. I just cannot digest it, it backs up my system, and I feel bloated. Also any of the products that comes from the cow like milk, and the byproduct cheese.

I have fish now and then but basically I am on a plant based diet which is working out much better for me. America needs to stop the vicious cycle or will people finding alternatives lifestyle diets finally force the beef industry to stop with the shortcuts. I feel not taking the care with the food source slowly harms their profits. Maybe that will the what is needed to go back to the natural order of what is best for the cow..

Unreal gummy bears, sprinkles what kinda of nutrition is in that then they pass it on to the customers. Is there a wonder so many people have health issues? Sometimes I wonder if they purposely do this.

As John Quiñones from ABC Primetime who did special on health, and our food. Do you want to spend your money on eating good and nutritious food, or do you want to spend it on medical services? He showed the more healthy your choices, or what you eat nutritionally the less you spend on medical services. Less doctor visits, less spent on medication, hospitalization, operations etc.

I’m worried about all that stuff… When is it gonna end? It’s becoming more and more gross and ridiculous! Feeding a cow candy? Really???!!!
Where is Greenpeace by the way? Or PETA? It’s a total animal abuse!! And human being’s abuse by the way!
Smh…

I grew up in a rural area where we were surrounded by farms and I worked on a farm when I was growing up. The taste, texture, and nutritional value of pasture-raised beef is sooooo different than the feedlot force-fed/agri-business crap that US supermarkets and restaurants are full of. It’s put me off meat for the most part, except for when I splurge.

My partner and I recently travelled to Ireland (work for him, tag-a-long cheap for me), which has a thriving and well-regarded meat and dairy industry and he was blown away by the beef because he had never had anything else. We in North America are really not getting a deal with our “cheap beef”!

I tried veal for the first time last week. I wasn’t all that impressed. I felt like for the leanness, I could ave had a lean pork chop, and as for it being a steak so to speak, I would rather have a steak from a cow who exercised and developed the muscle that makes him not so much of a delicacy…
after I had it, I looked up all the procedures in pls e for getting that young calve go have Su h tenderloins. If was so cruel to me, that I decided I dont want veal (mistreated baby cow) again. I am by no means a huge animal activist, but the process seemed so extreme and wasteful. I consider wiping out meat completely, at least temporarily, but I haven’t, but when I read about my meat source consuming fat and junk I dont even want, I wonder how nutritious my food will be once it hits the grocery store

Looks like Yahoo took down the link to the article. 😐