Home Play With Your Food The Pizza Gallery: Who Says You Can’t Have Pizza?

The Pizza Gallery: Who Says You Can’t Have Pizza?

I know, I know… people are constantly swearing off entire kinds of foods all in the name of weight loss, but I’ve got to wonder – if you put “pizza” on your list, was it because you were eating some greasy chain’s pizza, or some re-heatable box pizza? I’m almost certain you weren’t swearing off your own homemade pizza, right?

Well, while I gave up everyone else’s pizza, I certainly didn’t swear off my own. But why are my own pizzas so much better than anything else I might find at the store?

1) My pizzas have less salt. I don’t need much more than a pinch of a pinch worth of salt across my entire pizza because it has more than enough flavor. It doesn’t need the salt to give me a reason to keep eating it.

2) My pizzas have less grease. Whereas many other pizza chains insist on dousing their dough in grease to the point where the crust is fried while cooking, I don’t need all that. My dough is flavorful and so are my toppings. I don’t need to cling to fat to give me that “Mmmmmm!” feeling. I’m over that.

3) My pizzas have real ingredients. Do YOU know why there’s trans-fats in Pizza Hut’s pizza dough? Trans fats, the same artery-hardening stuff that killed countless people when the tried to sell that garbage to us as margarine? You DON’T know why that’s in there? Funny. Me neither.

4) My pizzas don’t rely on goo gobs of sweet tomato sauce to make them enjoyable. In fact, the moment I realized that I had a tendency to lean toward making my tomato sauces a little on the sweeter side, I backed off of them completely.

That being said… here are the fruits of my labor, aaaaaaand a reader who shared with me her own pizza-making adventure! 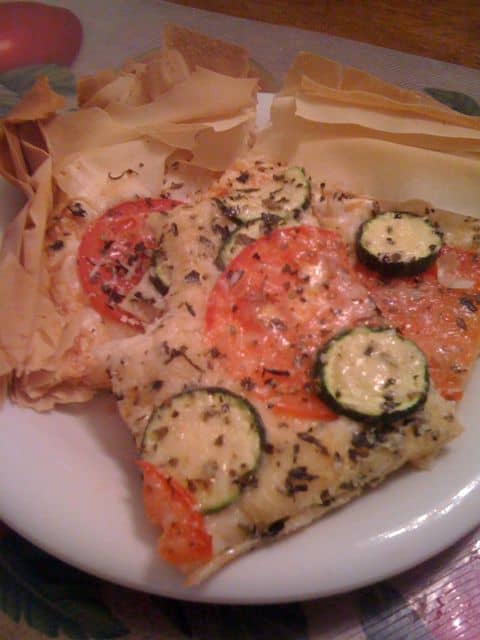 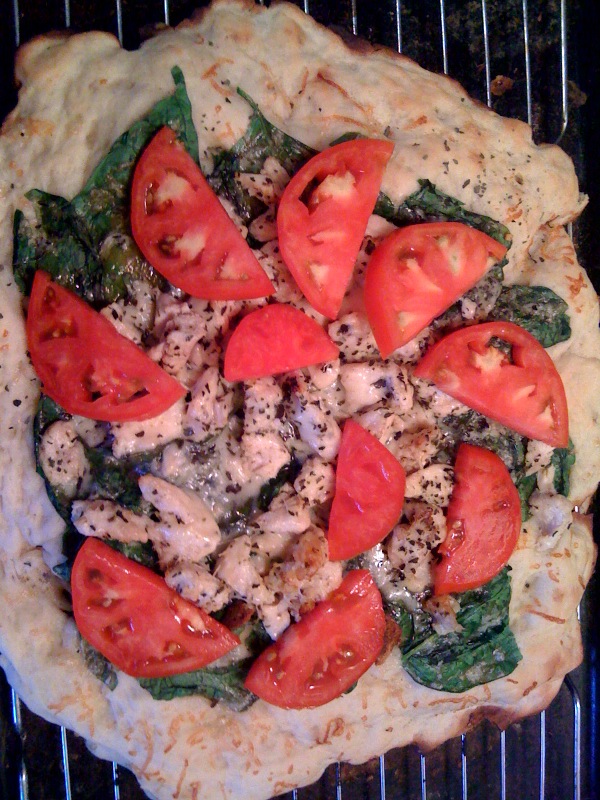 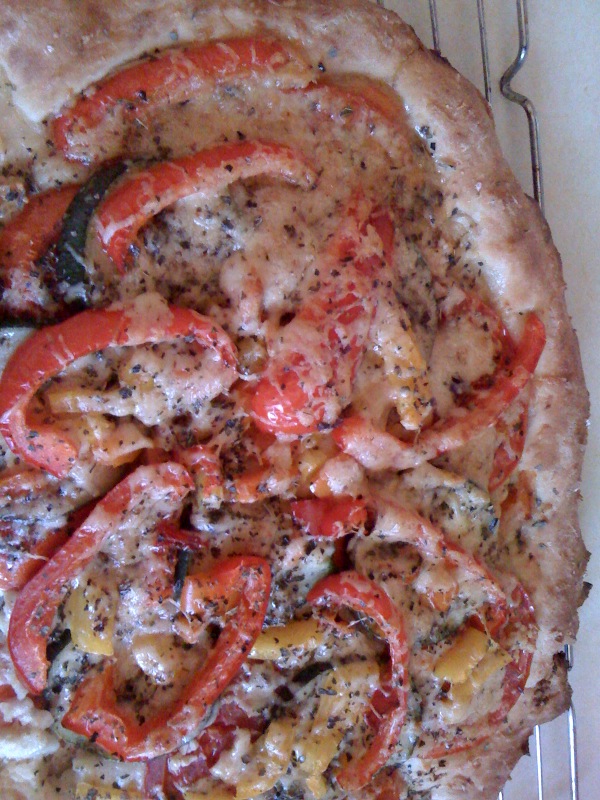 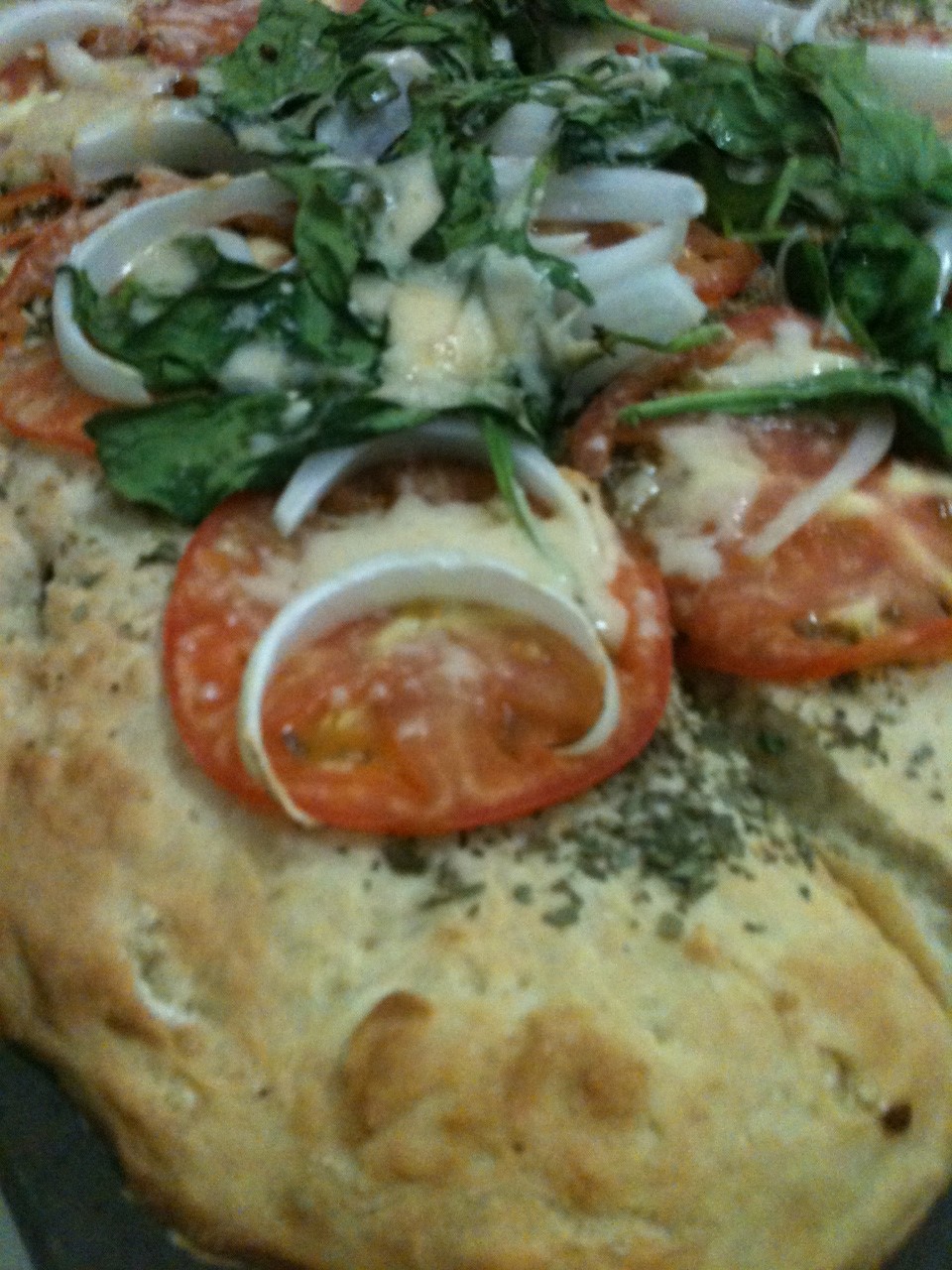 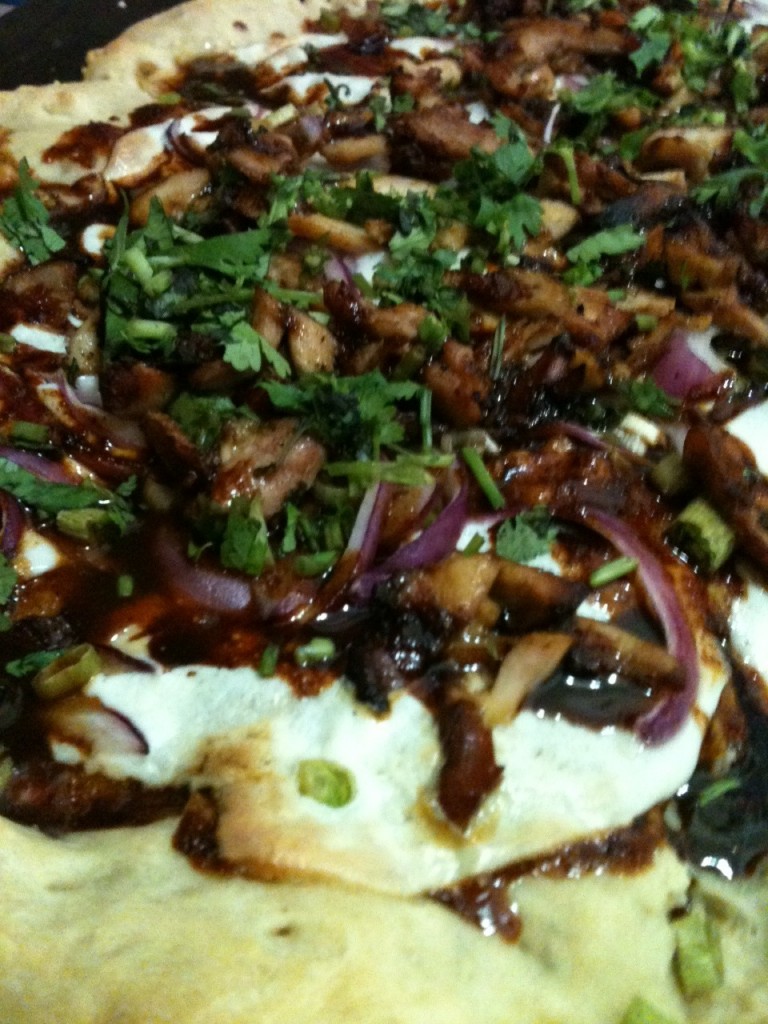 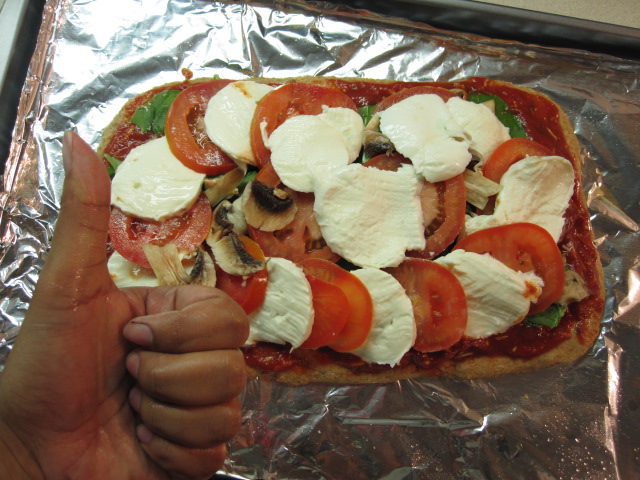 And yes, that is HER giving the thumbs up! 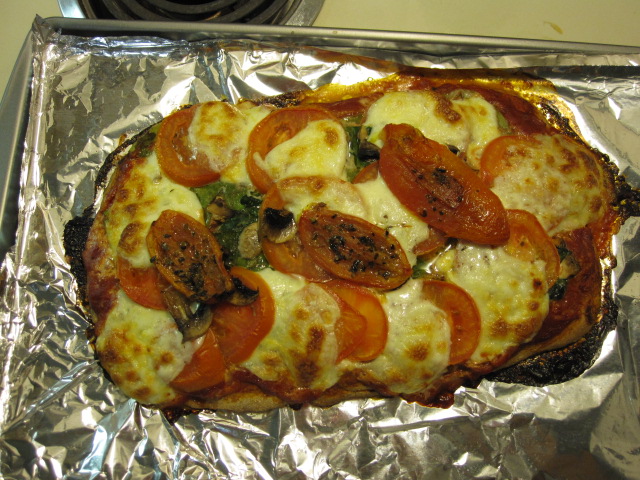 If you’re looking to make one of the pizzas above, you’ll need a good dough. While I can’t recommend any pre-made doughs, I can share my recipe for regular dough. If you must go for pre-made dough, look for one with as few chemicals as possible in the ingredients list, and as little salt as you can get!

What’s your favorite kind of pizza? Shoot, give me some ideas!

The Grits and the Glory

BGG2WL In NYC: How Do You Remain Active While On Vacation?

I often make pizzas using whole wheat tortillas. The crust gets so crispy and it’s great!

Lunch idea for next week! Love making my own pizza but I’m a little lazy on the dough making part. Some pizzerias will sell you their dough. but they are few and far between. Publix has their dough in the deli section. It’s pretty good and definitely better than the can stuff in the refrigerator section. I also think it is as cheap or cheaper than the refrigerator cans.

I make pits pizza. I can eat one and still be full. But I will try different type of toppings like u did. I need to find out what you use to make dough from scratch.

I mostly do the basics (my guys love plain cheese or black olives), but I would love to have the recipe for the one with the balsamic reduction.

If we make pizza, we like to do it on the grill if we can. We usually do sauce-less, and top it with fresh moz and lots of fresh veggies (bell peppers – usually red/orange/yellow, artichoke hearts, grape/cherry tomatoes, onions – sometimes caramelized, and whatever else we can find/already have). We like to top our pizza with fresh greens too (arugula is great) if we have any. Our favorite pre-made dough is the garlic/herb crust from Trader Joe’s. LOVE me some Trader’s!

I love Trader Joe’s I am going to look for the pizza crust you mentioned.

I love pizza and could eat it every day. But I’ve noticed that pizzas that we buy in restaurants tend to be either too greasy or the crust is soggy (which I absolutely hate!)

I’m going to try your dough recipe this weekend and see how it turns out. I’m no great cook, probably not even a good cook, but I’m willing to give it a shot.

PS: I can’t wait to see how your other readers respond. I’m drooling already! LOL

Before going mostly primal, I used to make sourdough pizza – it’s a little bit of a hassle at first, since you need to plan it days in advance, but SO delicious. Used to top it off with homemade tomato sauce with fresh oregano and garlic, good mozzarella and sometimes wilt a bit of basil or arugula over it for the last minute in the oven. Another really nice topping combo was goats’ cheese, sauteed fennel and mushrooms.

Man, I made sourdough bread one time. It was AMAZING. I’m glad you reminded me. I’m gonna have to find that recipe around here somewhere.

Booyah! I WILL be making a pizza this weekend…thank you!

Generally how do you make your pizzas in terms of bake time and temperature? Those look amazing!

375 degrees, about 20 minutes and then I start checking them. Frequently.

E, you did it again! I’m buying my yeast tomorrow and planning my pizza day sometime this week (definitely on a workout day). My favorite pizza includes sauteed spinach, carmelized onions, and a little cheese on top of tomato sauce. I also plan on making my pizza with tomato sauce, sauteed spinach, with one egg baked on top and sprinkled with cheese . Yummy!

I bought a whole wheat pizza dough from trader joe’s and made a goat cheese/fig pizza. I may have a pic somewhere. I’ try and dig it out.

Have you all tried Cauliflower pizza? Its so good! I found the recipe on-line and its so good! The dough is made of shredded cauliflower, egg beaters and flax seed and its divine. I use fresh mozzerella so its not completely low-calorie but its better than real pizza dough and great for vegetarians!

Not a big fan of egg beaters around here, but will definitely have to look into that. Sounds interesting!

I use the pre-made dough from Trader Joe’s (in the refrigerator section). They have a regular one, a whole wheat one, and a Basil one. I cut it in fourths and put them in the freezer. When I want pizza I pull one out, defrost it, stretch it out, pre bake it a little bit and throw on my toppings. Been doing this for years! I haven’t had a dominoes or pizza hut pizza ever since!

Made my first pizza last night and the kids loved it!!!!

Oh my goodness all of the pizzas look yum…I had in the past made my own pizza but reverted back to Domino’s Pizza.

Pizza is my weakness. I could eat pizza 3 times a day, everyday, for a week. Sadly I have been known to eat a whole medium pizza in 1 night. It’s my addiction. If I dont take a few pieces and put the rest in the fridge immediately it will be gone before bedtime.

Last year I found a pizza recipe that I LOVE. You use Hummus instead of tomato sauce (i use store bought but you could make your own), and whatever veggies you like. I usually put broccoli, mushrooms and yellow and red peppers. Sprinkle some cheese and bake at 475 for 15-20 min (or until dough is cooked). Voila yummy veggie pizza.

I like your hummus idea, I’ll have to give that a try. Thank you for the idea!

I am diagnosed gluten sensitive/intolerant, so I make my own using alternative flours to wheat, oat, barley…My favorite pizza toppings are grilled chicken, spinach, roasted red peppers with asiago and mozzarella cheese..

This is a good alternative and suggestion…thanks!

I stuff halved peppers with pizza topping and bake. That’s my simple version of pizza.

Wow I must learn how to make pizza on my own. These look so tasty. One day I will make these pizza dishes from scratch. I love olives

For the pizza dough recipe is it instant yeast you use or just inactive regular yeast. Also, how long would you say you knead the dough for?

Saute garlic & onions in EVOO (this will be your sauce)
1. Layer it on dough
2. add mozzarella, feta and provolone cheese
3. Top with tomato slices

I invested in a pizza stone so it takes about 15 minutes to cook that way in a 375 deg oven.

I like any kinda of pizza, I do love the sweeter tomato sauces but as long as its flavorful, I can roll with it. I love CHEESE so as long as there is cheese involved, I can rock out and regardless to where I get pizza from, I always have veggies on board so the fresher the better!

I have only used 2 things to make my own dough-one from a diet I was on -made a light semi crispy crust and the other from Trader Joes-don’t recall any details about it but it tasted REALLY yummy in whole wheat!

I have am diagnosed gluten intolerant and just recently went grain free. Coconut Flour and Almond flour are becoming my staples to bake with and recreate versions of things as wonderful as pizza crust!! All of these look great!!

Thank you for sharing especially the phylo dough pizza because I wasnt sure what to about that crust. I made a cauliflower pizza once, which wasnt horrible but you might want to like cauliflower.

Is tomato sauce still bad if you lean more towards the savory side? I like to use a ton of spices, anything I think Italians might use and never a lot of salt or sugar.

I like tomato sauce, but I don’t eat it often. There are so many other ways to dress your pizza, that you could eat ten pizzas in a row with no tomato sauce and not miss it a bit.

Tomato sauce is infinitely better when it’s savory instead of sweet, and in that case, provided you’re not eating a ton of it at a time, that’s fine in my eyes. The more herbs and spices you sneak in there, the better! 🙂