Home Video Vault Video Vault: What Can We Learn From The Calorie Detective?

Video Vault: What Can We Learn From The Calorie Detective?

I felt like you may have needed to see this.

A few points of note:

“Because of Obamacare, all restaurants with more than 20 locations will be required to list calorie counts.” Let the country rejoice. Restaurant eating is probably one of the most challenging parts of calorie counting, and if your estimation game isn’t on point, or if you’re not at a really quality restaurant… you’re fighting an uphill battle. It isn’t unwinnable…you’re just gonna have to be ready for war. 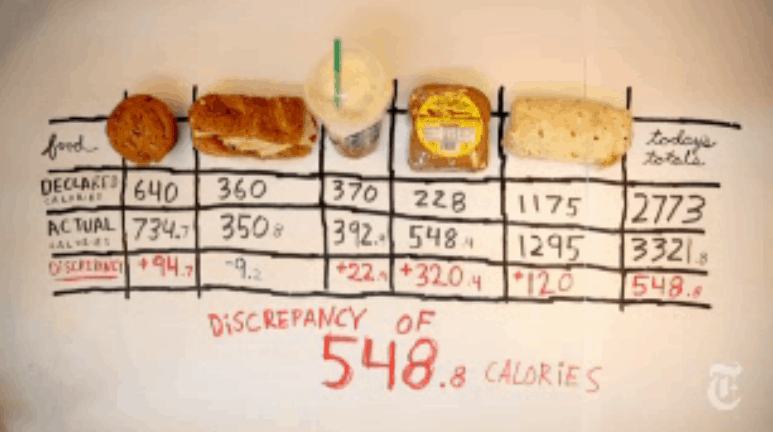 He specifies that the FDA requires packaged food, within certain constraints, to come with calorie counts. It should also be noted, however, that the FDA doesn’t check up behind industry in regards to the accuracy of their numbers, either.

It’s nice to know how to finally pronounce “calorimeter.” I’m not going to tell you how I’ve been saying it, all these years. Let’s just say… I’m glad I’ve never had to say it in public.

It’s also nice to know that all bodega owners across the city are the same. The exact same. “Yeah, yeah, that’s real healthy.”

I was actually unsurprised, the most, by the Starbucks drink; the drinks are made using pretty fail-proof recipes. The variable, there, that makes the difference? The whipped cream. No two people put it on the same and, if the barista likes you… you might wind up with more whipped cream – that’s more calories – in your cup.

Chipotle burritos are heinous, man. Did you see the size of that thing? I’m pretty sure a small country could be fed off that thing for a few days. My word. If a burrito that large can wind up being off by 120 calories, and that 120 calories only be about 10% of the caloric value of the entire burrito… perhaps we should be considering cutting the burrito in half and sharing it with a buddy… or making our own burrito. Just saying.

A day full of processed food yielded a calorie count of 2,773 estimated calories. The true total value was 3,321 calories, almost 20% more than originally accounted for, and that’s specifically for people who dine out that often. Since the FDA doesn’t check up behind food manufacturing companies and their caloric values, what’s the over/under on how inaccurate THEIR figures are? 30%?

Lastly, for me… I was really weirded out by how little protein was in his hypothetical day. All those carbs… how filling could all of that be? What a shame to eat 2700 calories, and still wind up starving at some point in the day.

What did you think?

It never occurred to me that the calorie count listed on the packages is not correct. I feel niave now thinking that I just took it as true. That probably accounts for why people say that the watch their calories but still don’t loose weight. It is definitely something to think about and plan for. Makes giving up eating out all the more easy.

Wow. Who will make sure the calorie count is correct? I remember seeing a video about Lean Cuisine calories being incorrect as well so not only do the restaurant post incorrect calories, so do food manufacturers. A shame.

I am also sliiightly shocked by the calorie counts being wrong. I watched a segment on the today show where they wanted to see if the calorie count in low fat ice cream was correct and just about all of them were wrong! I think I was pretty shocked about subway being the only one that’s about accurate. It always seemed too good to be true… All in all knowing this does make my decision to stop with the packaged foods completely the best thing I’ve done for my health.

Wow I rarely eat out anymore. This opens up my eyes to not think I could eat that ice cream its only 200 calories but it could be 500 because the box is not accurate. Hopefully I be able to think about that next time I go to a restaurant. I been cooking more and try to convince my lazy mother to cook from scratch. I also gave up on counting calories and using portion control.

Wow! I guess you really can’t trust that companies are going to tell you the truth about many processed, pre-prepared foods. Kinda scary.

I’m not surprised. As a parent of a child with type 1 diabetes, I routinely weigh foods to get an accurate carb count. The package is almost always wrong, listing a lower gram weight and fewer carbs (and hence, calories).

Well, damn… I can’t say I’m surprised, but still. That’s more than a little depressing to think about. Makes me want to delete my MyFitnessPal account. lol. Never that. I am thinking a little harder about those cookies in my cabinet, though. I read somewhere that the FDA allows a 20% leeway for packaged foods and what not. I guess one could just adjust it for 20% more calories, but who wants to go through that effort. Much less irritating to just spend a day a week cooking and freezing.