It’s really hard for me to write this post. I’ve literally been sitting at my desk, staring at the tab with this article in it for hours now, doing everything I can to avoid it. 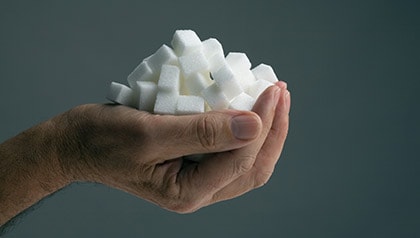 When you start learning how some diseases affect the body, and when you start to learn more about how your body works, you start wondering why other metaphorical versions of “2+2” don’t automatically equate to “4,” but then you realize that it’s not, necessarily, about whether or not two plus two actually equals four… it’s much more about whether or not two plus two has been found to equal four. In other words, you know how we wait for science to validate things for us that we sometimes already know to be true? Well, science is still learning some things.

We all need insulin: in non-diabetics, it’s released to help cells take in the blood sugar (glucose) they need for energy. But the cells can hold only so much; excess sugar is first stored as glycogen, and — when there’s enough of that — as fat. (Blood sugar doesn’t come only from sugar, but from carbohydrates of all kinds; easily digested carbohydrates flood the bloodstream with sugar.) Insulin not only keeps the blood vessels that supply the brain healthy, it also encourages the brain’s neurons to absorb glucose, and allows those neurons to change and become stronger. Low insulin levels in the brain mean reduced brain function.

Type 1 diabetes, in which the immune system destroys insulin-producing cells in the pancreas, accounts for about 10 percent of all cases. Type 2 diabetes is chronic or environmental, and it’s especially prevalent in populations that overconsume hyperprocessed foods, like ours. It’s tragically, increasingly common — about a third of Americans have diabetes or pre-diabetes — and treatable but incurable. It causes your cells to fail to retrieve glucose from the blood, either because your pancreas isn’t producing enough insulin or the body’s cells ignore that insulin. (That’s “insulin resistance”; stand by.)

Put as simply as possible (in case your eyes glaze over as quickly as mine when it comes to high school biology), insulin “calls” your cells, asking them to take glucose from the bloodstream: “Yoo-hoo. Pick this stuff up!”

When the insulin calls altogether too often — as it does when you drink sugar-sweetened beverages and repeatedly eat junk food — the cells are overwhelmed, and say, “Leave me alone.” They become resistant. This makes the insulin even more insistent and, to make matters worse, all those elevated insulin levels are bad for your blood vessels.

Diabetes causes complications too numerous to mention, but they include heart disease, which remains our No. 1 killer. And when the cells in your brain become insulin-resistant, you start to lose memory and become disoriented. You even might lose aspects of your personality.

In short, it appears, you develop Alzheimer’s. [source]

I know what age my grandmother was when she passed…of cancer. I also know what age my great grandmother was when she passed – a healthy 99, but she wasn’t eating “their” food. (Her words, not mine.) She was eating her own. Grown in her backyard. Not only could she not afford it, but she didn’t trust it. “Something about it just ain’t right… and it tastes bad.”

I always look at these kinds of studies with a skeptical eye, but for some reason, this one resonates with me… especially as a recovering emotional eater and sugar addict. Sigh.

Here in the US, Type 2 diabetes rates have tripled since 1980, New Scientist reports.

What’s emerging, the magazine shows, is that insulin “also regulates neurotransmitters, like acetylcholine, which are crucial for memory and learning.” That’s not all: “And it is important for the function and growth of blood vessels, which supply the brain with oxygen and glucose. As a result, reducing the level of insulin in the brain can immediately impair cognition.”

So when people develop insulin resistance, New Scientist reports, insulin spikes “begin to overwhelm the brain, which can’t constantly be on high alert,” And then bad things happen: “Either alongside the other changes associated with type 2 diabetes, or separately, the brain may then begin to turn down its insulin signalling, impairing your ability to think and form memories before leading to permanent neural damage”—and eventually, Alzheimer’s.

Chillingly, scientists have been able to induce these conditions in lab animals. At her lab at Brown, scientist Suzanne de la Monte blocked insulin inflow to the brains of mice—and essentially induced Alzheimer’s. When she examined their brains, here’s what she found, as described by New Scientist:

Areas associated with memory were studded with bright pink plaques, like rocks in a climbing wall, while many neurons, full to bursting point with a toxic protein, were collapsing and crumbling. As they disintegrated, they lost their shape and their connections with other neurons, teetering on the brink of death.

I have read this before somewhere and it really stuck with me. My mother is only 65 and she has full blown Alzheimers and guess what-she is also pre-diabetic. Once I became aware of the things that run in my genes I became serious about lowering my exposure to toxins and eating clean foods and read about how exercise can greatly reduce our chances of developing a lot of diseases. My husband has a theory (you know black folks and their conspiracy theories!) that the government allows this crappy stuff to be put in our foods because it gets us sick and fuels hospitals and pharmaceuticals.

Olivia, my mother say the same about the conspiracy! And I start to think it might be somehow true… O_o
This study really scares me, I feel like we are far to discover where all this mess is going to lead us… Every single year there is a new sad truth coming out and that really threatens us as a specie if we do not take immediate action. I’m really worried…. :s

Is this the GMO sugar beet sugar?

Because of the chemical reaction described, my assumption is that this is all forms of sugar that could cause this kind of reaction over time.

There was a UCLA study that was publicised a while back on metabolic syndrome and the brain – that is, the same sugar-fueled metabolic self-destruct that causes a lot of visceral fat to build up also destroys synapses’ ability to change – which is a lot of what short-term memory is built on.

The title of the articles that picked up on this study were titled, aptly: “Does sugar make you stupid?”

Most of the media coverage suggested supplementing with omega-3s to mitigate the effect, as I notice most people aren’t simply willing to cut back on the culprit. Still, scary stuff. What are we doing to ourselves?

This is frightening, but it’s a good reminder to keep on track. I noticed that when I consumed high sugar/calorie foods over several months that my ability to think and concentrate on different tasks was impaired.