I think that anyone who has spent enough time on the web is familiar with the wonders of The Oatmeal. Short of his love of cats – cats, which I hate with the fire of a thousand burning suns – I always walk away from reading an Oatmeal comic strip with either a little happier or a little more enlightened. The strip I’m about to share with you is no different. 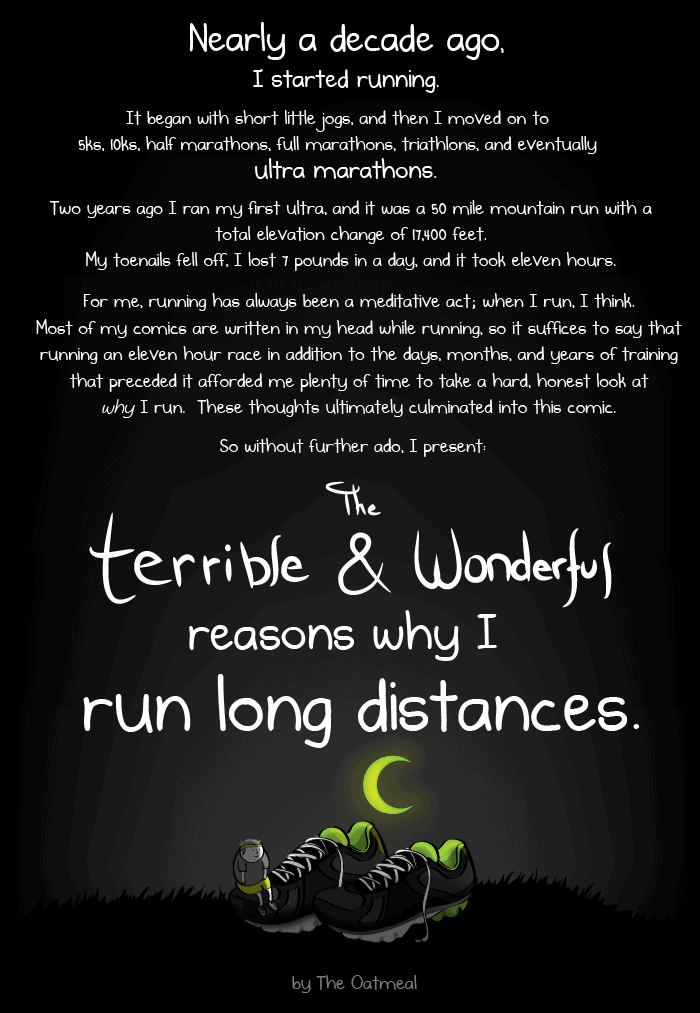 Let’s not talk about it, ok? Okay.

But, after having spoken at the Black Girls Run! Sweat with Your Sole conference a little while ago, I realized what I missed the most about running, not only the comraderie – because the BGR! girls are absolutely darling and it was easily the most pleasant conference experience I’ve ever had in my life – and not only the banana ice cream (which may or may not make a great recovery treat for long runs), but the thinking time. The time I spent listening to audiobooks as I ran. The time to myself.

In short, I’m posting this comic more so for myself than for you, in hopes that I’ll skip the weights today and hit the park for a run. 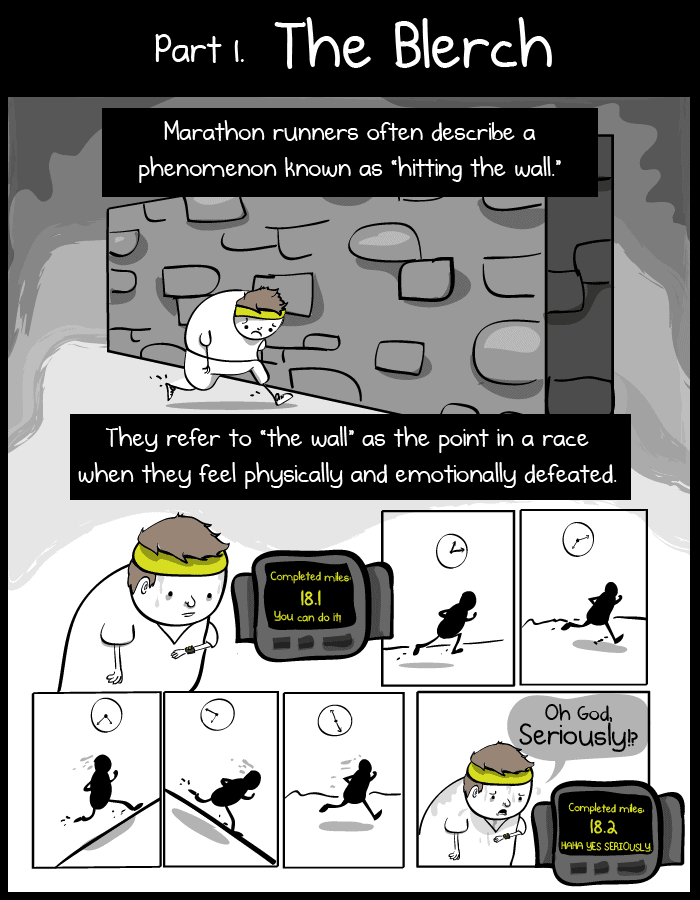 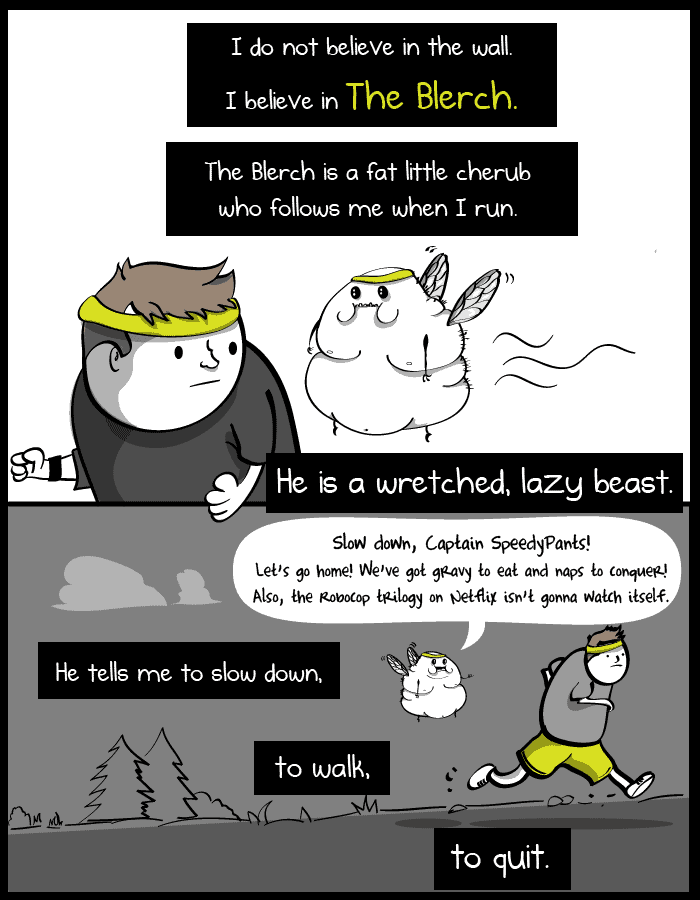 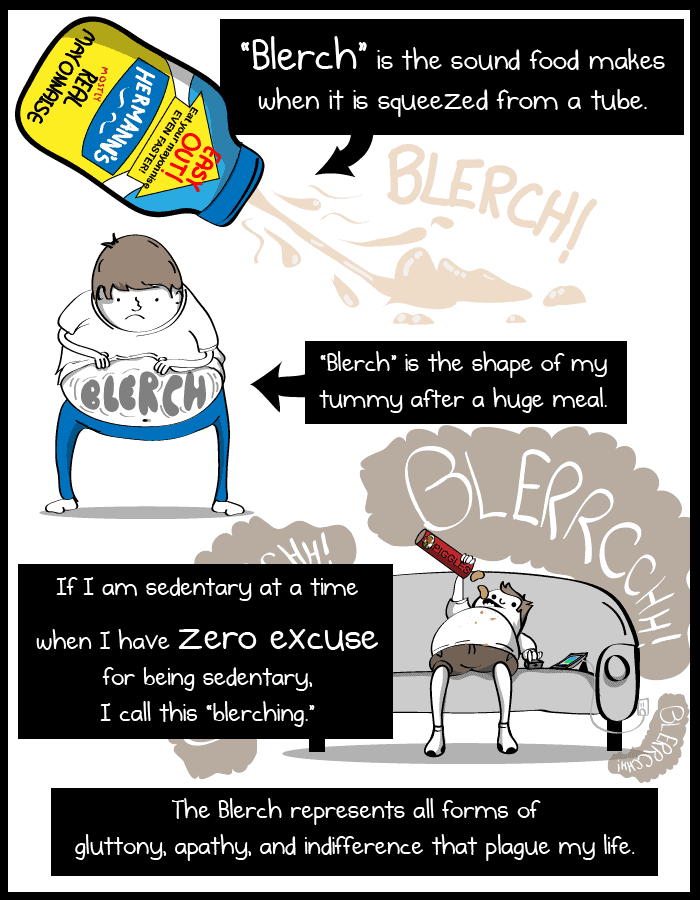 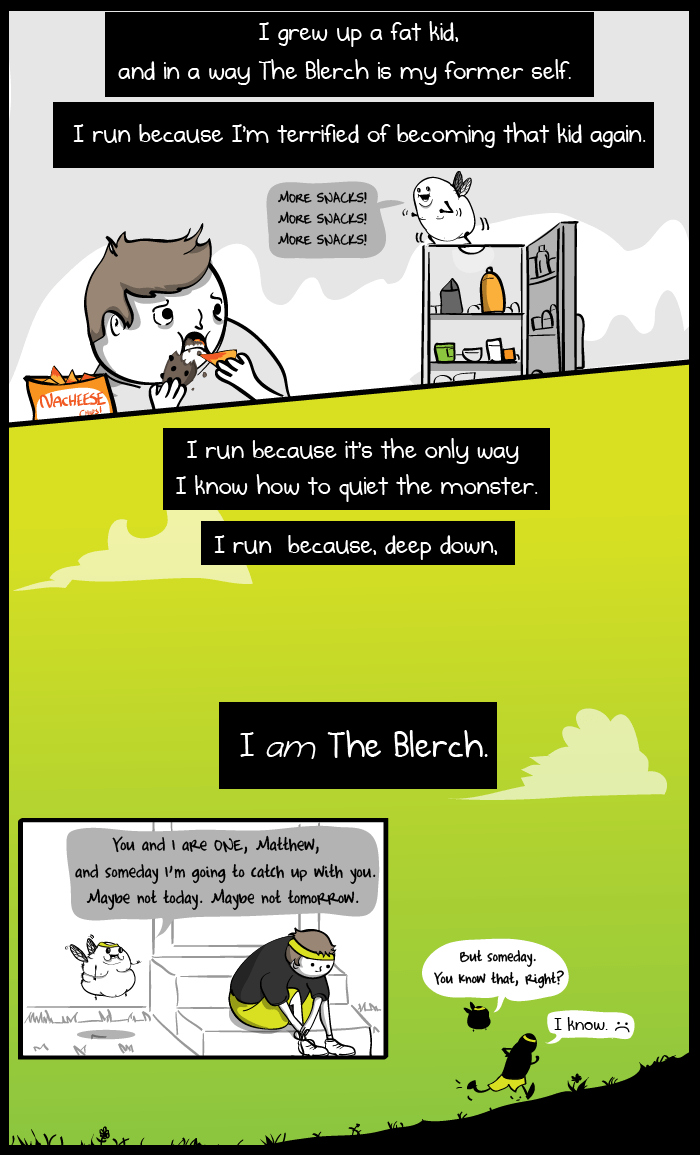 The strip goes on for a few more parts, all of which you should check out. I laughed – heartily – at the “I run so I can eat!” mantra, because that’s the one thing that freaked me out about running long distances. That binge-like fury with which I ate after a 16-mile run (my longest to date) felt too much like a binge fro my old binge eating days, and after I finished my Army Ten Miler… I had to hang it up… until I learned how to fix what I broke.

Long distance runners, go check out the strip and let me know what you think.

And then let me know what your fueling techniques are. Because, while he talks about running making him feel like he’s defeated the kraken… I certainly felt like long-distance running turned my appetite into the kraken. Whew.

First of all, you gave me another reason to LOVE you. I detest cats also “with the fire of a thousand desert suns.”

Now for the Oatmeal comics. These are hilarious and true! Long distance running makes you RUNgry. That is definitely true. It is important to figure out what fueling strategy works best for you before, during, and after to put that at bay a bit. Here is what I do:

Before short runs (anything under 5 miles for me) – usually these are midday or evenings in my schedule. I can do a piece of fruit or serving of nuts or trail mix about 15 minutes before the run.

Before long runs (6-14 miles – haven’t done more than 14) – usually these are first thing in the morning so I eat about 45 minutes to an hour out. I will have a serving of heart healthy cereal with a tbs of dried fruit & a tbs of chia seeds with 1 cup of soy milk. If it’s cold, I’ll do oatmeal with the fruit & chia seeds.

During short runs – WATER is enough.

During long runs – old fashioned honey sticks OR Gu OR Sports Beans OR dried fruit. Basically, whichever I can afford that month – I’m frugal. I take at about 45 minutes of running so it hits my system at about the 1 hour mark. I do this at about the next 1:45 mark so my system gets it at the 2:00 hour mark, etc. I couple this with WATER as well. If it’s really hot and humid, I may add about 6 ounces of an electrolyte drink like Nuun to the mix.

Short runs are followed by my normal lunch or dinner which I adjust on run days to be my heaviest meal for that day.

Long runs are followed by a protein heavy breakfast which could be pancakes made with almond butter and topped with fresh bananas and walnuts. One of my faves!

I try to build in more snacks on long run days as well to avoid the “I’m going to eat my arm off” feeling.

I saw this strip by the Oatmeal and loved it! I too am in love with running! You are so right about it giving you time alone with yourself. I always hashtag my running photos with #runningismytherapy because it truly has kept me sane over the last few months. I haven’t attempted any long distances yet but I plan on doing a half marathon next year. So far I’ve completed a 10k (walk/run) and in Nov. I’ll be running an 8k.
And post run appetite is definitely a hunger I haven’t experienced since my pregnancy days. I felt like a bottomless pit after that 10k. I try to fill up on healthy things that will keep me full instead of the mindless snacking I used to do.

First, I get that it freaks you out to refuel after a long run. It can feel a little like driving through a neighborhood full of bad memories. There is little I find scarier than when that self-control starts to slip. It was a long some time before I learned to recognize the “I’m-falling-apart” kind of anxiety that always came with binging. I know “The Blerch”.

The important thing I’ve learned is that the “binge” after a run really is not the same– the difference is that I’m still in control and *choosing* to feed my body what it needs. I remind myself that I’m throwing food into a hole that is well over a thousand calories deep. You don’t have to fill it in all the way, but you can’t just leave a hole that big in your body. Giving in to that cry for sustenance is not a failing and it doesn’t mean The Blerch has caught up to you. For me, making a deal with my body (the devil!) to eat and eat without losing control, feels like such a huge win that I’m set to make all the right decisions for days.

As for refueling strategies.. I don’t know. Okay, for all my talk of control I’m really not very strategic about this. Sometimes the appekraken (kraketite?) settles for a massive smoothie per No Meat Athlete. Sometimes it wants a whole head of cauliflower, many tiny baked potatoes, guacamole on flax crackers, a bowl of borscht and three bananas. I’m planning an avocado sushi roll and maybe that’ll be my next refuel. Usually, when I stumble ravenously into the kitchen after mile 12 or greater is not a time of careful selection: the first thing(s) I see are breakfast. So, make sure those first things you see are *real food* and that the Keebler Elves stay in their damn tree!

My knee does not like long distance running unfortunately, but usually after running I’m not hungry at all, my stomach is all messed up but I force myself to have some kiwis or eating an apple. Drinking something warm like tea.

Thank you for that!! Since I completed the Super Spartan I have been feeling ravenous and trying to catch myself from slipping-up. It’s also been a little hard for me to hit the pavement again…especially with Hibernation Season approaching.

That comic strip and knowing that I’m not going crazy was just what I needed to read.

Just…yes. Everything about this take on running, each installment of it, is spot on for me and for other runners I know.

In your blog, you talk as much about listening to our bodies as you do about counting calories. If you’re listening to your body correctly after a long distance run, yes, I suppose it is a type of binge, but you’re doing it because your body needs it. Just like you need a greater caloric intake because you lift weights than you would otherwise, so for running. Just like with weight lifting, all you do after running is eat no more than your body, and you track that by listening to your body (even if your body needs a woolly mammoth). Although it may feel like you can’t stop at first, unlike emotional eating, when your body’s done, you will. You’re just not used to having your body talk to you like that.

Try it again! What I’m saying is, please, please bring back Runtober! Even though I’ve been running a very long time, I learned a ton from last year’s 🙂 And, as a final note, eventually, if you’re doing it right, as the comic said, running’s not just about fitness. Just like I’m sure weightlifting gave you much more than merely toning your arms, running has more to offer as well, that’s worth at least checking out.

This comment made me all warm and emotional inside. Seriously.

I haven’t been “right” since my first half this spring. I haven’t been able to be hyped about running since then and its been more of a chore than a release.

Recently, I hit the wall after doing less than a mile. I knew if I started crying I would be too weak to walk, and I didn’t want the neighborhood squirrels attacking me while I laid on the ground or passerbys stepping over me. I combo’d my way back and deemed it the longest, shortest run of my life!!

Anyway, I recovered enough to do two 10Ks(I’d already paid for ’em a while back). Afterwards, I ate everything that didn’t have a skull and cross bones on it. I could NOT get enough. It seemed when I finally got ahead of my hunger the kracken started howling again. The growling sounded like furniture being pushed across a wooden floor. It was soooo loud!! No amount of protein, carbs or fiber could tame the beast. It was really ugly and I felt like any burned calories had been made null and void. I was definitely not happy about not being able to put a leash on that animal to control that hunger.

Two more races (paid way in advance) coming up and I pray that the blerch and the kracken never join forces.