Home The Op-Eds Michelle vs Melania, and the Sad Way We Talk About Women’s Bodies

Michelle vs Melania, and the Sad Way We Talk About Women’s Bodies

I always say, “Nothing on the Internet surprises me anymore,” and then someone comes and takes the bet. 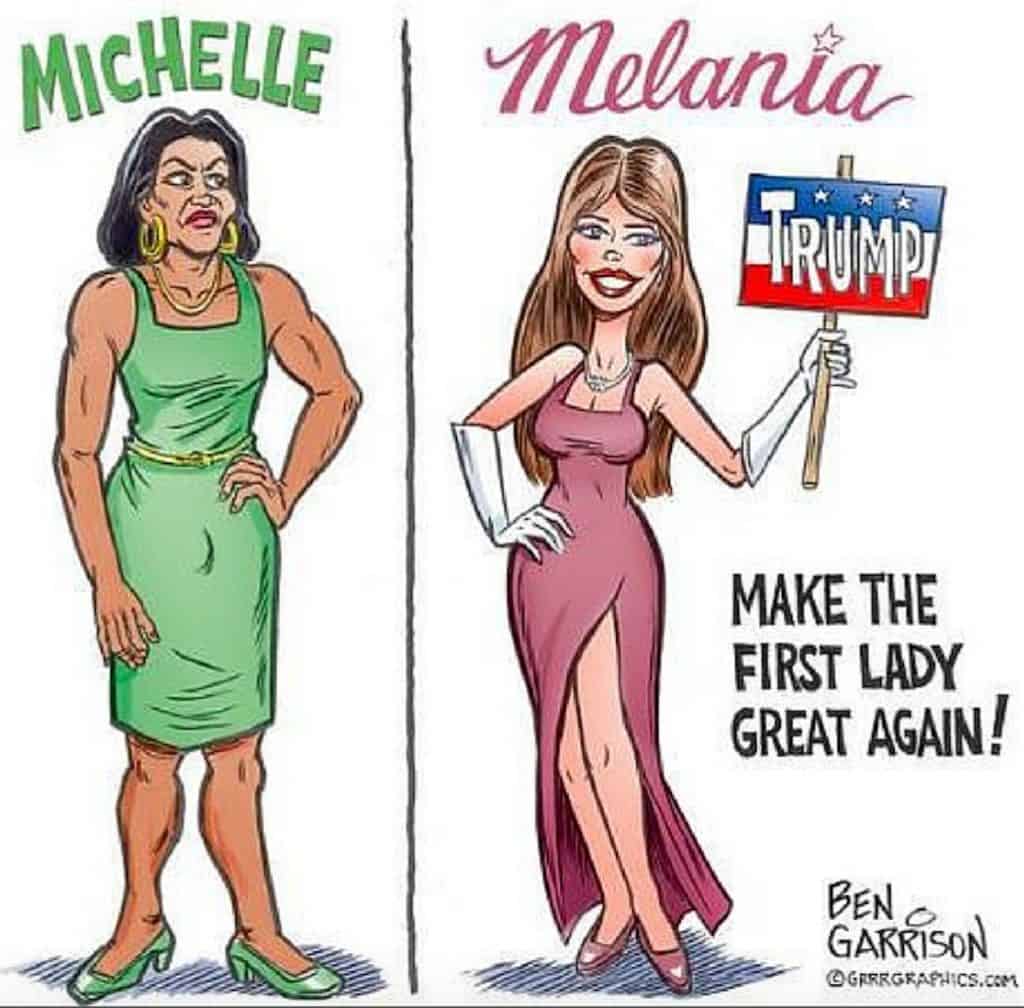 This cartoon graphic appeared on the Internet this past weekend, and I missed it because I was covered in baby food and spin class sweat (don’t ask.)

When people look at this photo, they see a woman with a curvaceous, slender figure with large breasts in a long gown, white gloves, straight flowy hair, and a smile, all while holding a Trump sign.

They also see a woman with broad shoulders, giant arm and calf muscles, doorknocker earrings, matronly shoes, raised eyebrows and a scowl on her face, and a dick print. Take another look—the bulge in the crotch is supposed to make you ask yourself, in a time where people are all too focused on the genitalia of another human being, “Was Michelle Obama really born male?”

All of these specific signals in the comic are bound together under the caption, “Make the First Lady Great Again!”

Presumably, the current First Lady is not great because she is not Melania Trump’s style of gorgeousness, beauty, and caviar-glazed glamour. The current First Lady, with her big ol’ diesel arms and her scowl isn’t even a lady at all. She’s… something else, entirely. Something with, presumably, a dick.

Think back to last year, when The New York Times published an article, where a top 10 tennis player said the following:

[Agnieszka] Radwanska, who struggled this year before a run to the Wimbledon semifinals, said that any gain in muscle could hurt her trademark speed and finesse, but she also acknowledged that how she looked mattered to her.

“Of course I care about that as well, because I’m a girl,” Radwanska said. [source]

Remember how her trainer said, essentially, the same thing:

“It’s our decision to keep her as the smallest player in the top 10 […] Because, first of all she’s a woman, and she wants to be a woman.” [source]

Remember when tennis player Andrea Petkovic, while talking about seeing her strong arms in motion in photographs, said, “I just feel unfeminine.”

I’m not picking on tennis players, here—I’m pointing out that the comparisons between Michelle and Melania are, quite frankly, the same as the comparisons tennis bawse Serena Williams endures between herself and her competitive peers.

There is a fascination within American society of pitting women against one another unhealthily in ways that don’t ultimately benefit them. To my knowledge, Melania hasn’t uttered Michelle’s name once. And, to my knowledge, Michelle hasn’t said her name, either. Her husband is President, already. She’s fulfilling her role as current First Lady, helping support families and inspire children to be better.

Serena is compared to her competitors in such a way that she and the public’s response to her is instructive to her competitors. Her peers learn that looking like her brings about penalty. It’s why Maria Sharapova, couldn’t beat Serena to save her life, spent so much time out-earning Williams in endorsement deals. This is a lesson for the tennis players who “want to look like women” and not, we’re led to assume, like Serena: “Maria’s figure”—and Melania’s, for that matter—”is the winning recipe.”

With messaging like this, is it hard to see why so many women starve themselves or kill themselves in cardio—often against their best interests—to avoid “looking muscular?” Any wonder why women want to “look toned, but not too toned?”

Femininity, ladylikeness, and any other number of cutesy ways we identify women is rarely left to the woman to determine on her own. It, much like beauty, is something society likes to bestow upon you when they want or need a favor from you. And, when society wants nothing from you, you’re rarely given the title of “feminine” or “beautiful.” Commercials that show long, straight-haired white women with false lashes and weave tracks promoting goodness knows what allude to how you should want to be beautiful like them.

Black women, they’ll get to us someday. We’re not beautiful yet because they don’t need our coins to help save their businesses. In Serena’s case, we’re “just not marketable enough in comparison to Sharapova.” Ouch. In Michelle’s case, we’re not glamorous enough.

Let’s call it what it is: black women in positions of power and presence are shamed for their bodies, for their emotions, and the fact that their special brand of femininity has a darker hue to it. The fear of this kind of scrutiny and shame results in many black women opting out of the spotlight altogether; many others go for it with gusto, only to be shunned because she’s not sexy. Let’s expand it to all of womanhood: If she happens to be sexy, she’s told she got her job because the men like looking at her, or she’s objectified and expected to provide favor in order to receive perks. And even then, her employment is tenuous.

I’m frustrated by the fact that a woman like Melania is going to be seen as some shining beacon of what a woman should be. I’m even more frustrated by what depictions of strong women ultimately become. They’re men, with angry faces and bulging crotches. They’re everything but feminine. They’re not ladylike. And I’m downright disgusted by what the implications are for black women, once again: we, women with dark skin, coily hair, brown eyes and [in some cases] strong bodies, will never be worthy, regardless of how many accolades we’ve earned or how hard we fought our way to the top.

Except, we should not trust them to define our beauty. We define our own. We set our own individual standards, we play by our own rules, and, like Michelle and Serena, we slay on our own terms. And, when wider society draws cartoons of you with an oversized rear end or male genitalia, you laugh. Because you still won… and they’re just… drawing cartoons.

Q&A Wednesday: Working Out Doesn’t Work For Me!

What Impact Does Salt Have on Blood Pressure?

It is also a patriarchal ploy to ridicule women. They had done the same cartoony thingy with Hilary Clinton. Power is not to be equated with “woman” and those who defy gender norms get to be made fun off and be portrayed as men. Poor men, scared shitless of what the world will look like when women stop caring about their scripts of who we should be. I can’t wait for that day to come. Personally, the more uncomfortable I make a man feel, the better I feel about myself!

Ben Garrison can kiss my #$&– BC he prolly has a hard time being a man.

People should not allow society define them, we are all beautiful in our own ways. You can’t please everyone, and if you try to do, then you hurt yourself more. Just stick to what you know is best for you and in all aim to stay healthy

YES! \o/ “…we should not trust them to define our beauty. We define our own. We set our own individual standards, we play by our own rules, …we slay on our own terms.

“[W]e slay on our own terms. And, when wider society draws cartoons of you with an oversized rear end or male genitalia, you laugh. Because you still won… and they’re just… drawing cartoons.”

BOOM! Great piece as always. This really gets to the heart of a lot of what I’ve been feeling lately. Being a black woman…and a fat black woman at that…often leads to feelings of invisibility because, like you said, I’m not the target audience for Madison Avenue. Definitely going to be sharing this post!

It is fear of a powerful woman. A woman with a toned body is displaying power which (for some) is a threat. Add melanin, and it’s a threat to the 100th power. FLOTUS is a black woman who is smart, confident, beautiful and fit and that is way too much for insecure people to deal with. Not to mention that for those who believe America has to be great again, they assume it must return to some 1950’s idealized fantasy. Just as, I assume, women are supposed to be a 1950’s fantasy in order to be considered “real” women. I personally could care less who accepts me. I accept me and I don’t need to fit into someone else’s definition of who I should be.

Personally I can’t wait for Michelle to be president.

Hilary is just paving the way for even greater things to come ….

I’d rather look like Michelle Obama…. I’m really going to miss the Obamas in the White House, although I’m sure they’re both looking forward to an exit.

She’s the second example in recent memory of the FLOTUS being as well qualified for the Presidency as the POTUS. The first one is actually running for President now, so we would have an FGOTUS if she wins… No jokes about whether or not her husband is a gentleman, please. Both were lawyers in each case.

With a certain current candidate whose name I will not mention, we have an oddly similar situation (both he and his wife are equally unqualified as POTUS, dunno about the FLOTUS position…). But one of these days, we will have to deal with a FLOTUS who isn’t willing to be part of a twofer, someone who already has a full schedule of her/his projects and says “just pretend you’re still single, dear, and leave me out of it”. We were just lucky with Michelle deciding to take a hiatus from her profession for family reasons.

For real—-women get beat over the head enough with this sexist nonsense about how we all have to look one certain way and fit into only one certain box to be considered whatever the hell is currently deemed attractive, or so-called being “hot”. Women of color have always been measured for too long by the yardstick of whiteness anyway—this is the 21st century, and people (even some white folks) finally realize that beauty comes in all colors, and that the definition of it is expansive, and not just limited to one race/culture/state/country.

Ironic update after the Republican National Convention. Melania turns out to have actually admired Michelle Obama all along, so much that she lifted some of Michelle’s 2008 convention speech for her own… Guess the cartoonist is baffled by this particular real dynamic.