On the Day @Reebok Ditched Rick Ross for Being a Scumbag

…I think I did a little tootsie roll when I saw the news: 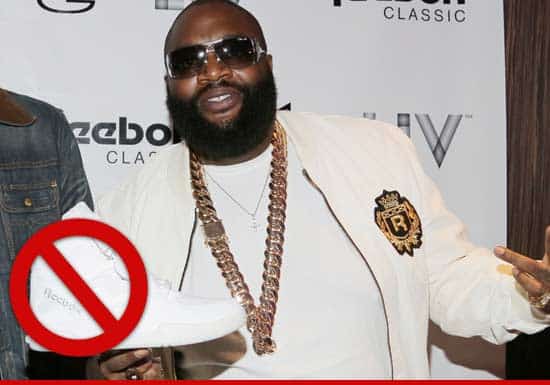 Reebok tells TMZ … “Reebok holds our partners to a high standard, and we expect them to live up to the values of our brand. Unfortunately, Rick Ross has failed to do so.”

Reebok goes on: “While we do not believe that Rick Ross condones sexual assault, we are very disappointed he has yet to display an understanding of the seriousness of this issue or an appropriate level of remorse.”[source]

You see the lyrics he wrote in the song, right? While I’m generally of the mind that music tells some pretty dark and grisly tales, I still need there to be some kind of honesty and agency in the storytelling. With this tweet from Rawse, however…

I dont condone rape.Apologies for the #lyric interpreted as rape. #BOSS

I get the impression that he thinks Black women – because, #lol angry Black women – all got a collective bug up their asses and decided he was talking about raping them, so he apologized because, #lol apologies shut women up and send them back to the dressing room to try on a new thong to show off their giant booties, #amirite?

Listen. Music evolves, and it is a beautiful thing. The hip-hop that we once knew does not, in any way, speak to the reality of the language he used; slipping something in someone’s drink (implied by the declaration that she “ain’t even know it.”) Taking them home and enjoying “that,” and following that up with “and she ain’t even know it” implies rape, plain and simple.

And then, to imply that he was condescending to people by apologizing for a “lyric interpreted as rape, because surely this hubbub is due to your little misinterpretation and not reality, because #lol I’m a BAWSE and I ain’t gotta rape nobody!

This is where it became intolerable for me, and I was most certainly making a mental note of who not to support in the future.

And, yes, Reebok – with its snazzy new little 37th and 5th CrossFit box and gear store – was on my sh-t list.

Even the most disgusting music speaks to someone‘s reality. Rick Ross isn’t an anomaly. Eminem wasn’t an anomaly. Immortal Technique isn’t an anomaly. Insane Clown Posse isn’t an anomaly. The fact that I could keep typing names of people who create some seriously scary stuff only proves my point. For me, the line was drawn at his inability to own up to what he’s put out there. It sounds too much like he’s just putting words together and throwing that trash on wax because, #lol money. Duh.

He did eventually issue a more formal apology, but it just sounds like he hired Olivia Pope. Not like he learned something about his actions. At the bare minimum, I’m glad he issued it.

Sigh. The existence of this lyric and his original response – you know, the one before money became a matter – just felt like my existence was being trolled. I like good, old-fashioned, raunchy, elbow-throwing, ratchet music. I don’t like feeling like I’m listening to a rapist who doesn’t understand he’s raping.

And that’s why I’m particularly happy that the following language was in Reebok’s statement:

[…] we are very disappointed he has yet to display an understanding of the seriousness of this issue or an appropriate level of remorse.

WHEW. I’m about to go buy some of Alicia Keys’ new shoes to go celebrate! Chile!

As a victim of sexual assault I was appalled at those lyrics. Even all artist that talk or imply raping someone is disgusting. We already have enough of the media, some police, people blaming rape victims for what happened to them. It takes a lot of victims to learn it is not their fault for a long time. Sometimes victims are afraid to report it. In the end this causes post traumatic disorder. What if Rick Ross really does this in real life is he going to say “blame the molly”. Rick Ross need to take this seriously he is already selling the idea of being a drug dealer now a rapist. Now a person who has influence over the youth is making date rape seem cool. Rick Ross must think that we are dumb if he thinks we were jumping to conclusions. First of all music speaks enough about objectifying women then it is come to these artist trying to justify rape. This is sick. I am glad that Reebook dropped him and people were protesting. We needs more ways that let people know that Rape is wrong.

I too am a former victim of sexual assault. I’ve taken my power back. I am also a musician, producer, writer, etc and prior to the release of this song, I was already totally offended by his extremely fake rap persona and musical content. His lyrics are all disgusting in some way shape or form and are not only degrading to women, but as previously mentioned, they’re harmful to the youth who listen to his music and watch his videos. I do not support him or any other artist who displays such outrageous disregard for women and children.

I am one to guard my eyes and ears to the things out there in the world. It’s not pretty and it’s getting worse. Some of our young people are worshipping these people like Rick Ross and many are not mature enough to realize that what Rick Ross and the like are doing and saying should not be the source of their life’s values. It’s a shame because it’s steering out young men and women in the wrong direction. Of course music is not the only culprit but I believe that it contributes.

What do I think? I think you’re amazing! While reading your post I said out loud “No she didn’t” and “Preach!” I love, love, love that you always tell it like it is.